Today's autolanding attempt with my Skywalker 1880 was a failure. I attempted to insert some Do_Change_Speed commands to incrementally slow down from cruise speed to landing speed. On the base to final turn the plane continued its roll to 80 degrees. I suspect I got too slow and the inside wing tip stalled. However it appears the airspeed was adequate at that point, although it dropped way below stall speed during to recovery. Perhaps there is a lag time in the data? Could this be an accelerated stall? Is there any way to see how many G's I was pulling?

The graph below shows a large divergence between Servo_Roll and Nav_Roll & Roll. I need help understanding this.

Nav_Roll shows the identical thing, we would this be exactly the same?

Servo_Roll, I presume is showing what the servos were trying to do to correct the excessive bank angle, which probably stalled the wing tip more.

Roll_Sensor is the pink line that is very hard to see. I have no idea what this is telling me.

Here is a short video http://youtu.be/p6kayKtrg9I

Here is my flight plan: 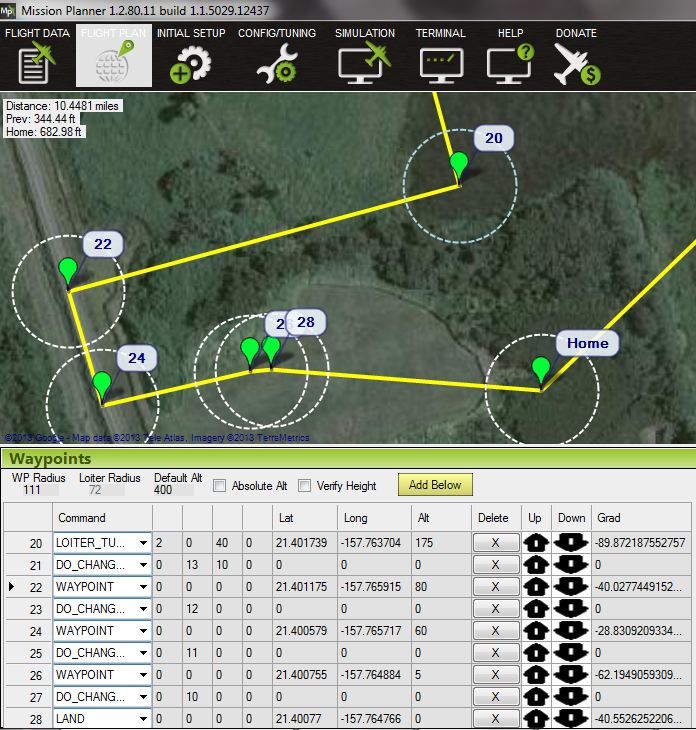 Here is a Google Earth view, I just figured out how to display the "Planes", that is so cool! Here is the .log file, sorry my computer crashed so no tlog.

There were some other odd things you'll see if you watch the video. The plane really dived hard to get down to 175ft at WP20 where it was to do 2 turns in Loiter but the profile was too steep and it crossed the point too high at about 220ft and too fast. Why at this point does the APM add 50%+ throttle in the turn?

This reply was deleted.
Loading ...
"Hi
I'm Liam from T-MOTOR. I would like to reach out to see if there is any possibility for us to work together.
We are a propulsion system manufacturer who offers motors, propellers and ESCs for all kinds of drone applications which vary from secur…"
"Anyone in the DIYDRONES Australian subgroup based in Alice Springs, NT?
I am experimenting with Ardupilot (standard Arduplane), Pixhawk 4 FC in a 4-ch
RC "AXN Floater Jet" foamy plane..."
"Hi everyone, I am looking for someone who is good at drone building, repair and software in Adelaide. Please give me a call on 0477 319 219."

Moderator
"Wow, Ning2 looks really great on mobile. I had sort of drifted away as my browse-time went more on my phone, so this is great."
"I am sure most will say not again, Pixhawk telemetry. I do need help and all can be reassured that I have spent many hours scouring the net for useful information. I am not new at quadcopter flying, I started in 2012 and have progressed through many…"
More…
Loading ...