OK, it's not a concept. I built it, it's nearly ready to go.

However, until it works, I will call it a concept.

3S 1000mAh battery not shown, but will hang underneath.

It's a bit heavy, but I'm sure I can hold it, especially if I sit on the ground or on a chair. Switches might be a bit hard to get to, but to switch modes shouldn't be a problem.

I used a modded plywood FPV holder because it didn't fit the dx6i anyway. So chopped a bunch of wood off and screwed it to the back of the case.

The Tx antenna only fits sideways which shouldn't be a problem, but I intend to replace the antenna with a coax for installation of a 2.4gHz WLAN amplifier which would then be mounted on a pole (a stick, not a Polish person). ° 3D LOCK DOESN'T MEAN JACK - you absolutely need telemetry so that you can track your GPS location and wait for it to settle down. Since the crash I have seen the 3D lock jump 30m and back within a few seconds. Almost surely this was the reason for my model rocketing off (I got a 3D lock after 20s or so in a completely new location).

° There are HD cameras and then there are cheap HD cameras. Cheap HD cameras are not HD, no matter what the video resolution output is. HK HD WingCam I'm talking about you. $40 wasted on you when the 480p keychain for $7 makes better video.

So having started with a Turnigy micro quad and finding that I crash an awful lot and spent more time fixing it than flying, I started building my own frames. Starting with an oversized overweight H-quad (pine wood booms). I simply didn't fly. Really my inexperience of building lightweight flying machines there.

So I rebuilt into a x-quad and drilled the arms out to save some weight. Now I was flying again and I must say, it was pretty good. More robust than the turnigy, but still crashing too much / changing too many props for it to be useful.

I decided that my problem was one of scale. These micro quads are very twitchy, they react faster than your eye can detect and my responses were always to overcompensate until I hit the ground.

So the next build was a balsa boomed x-quad which was dimensionally 1.7 times the size of the pine wood x-quad, for the same weight. I started having more flying time before the crash. But the first crash broke a boom square off. Balsa just doesn't have the strength needed.

Here's a picture of the balsa x-quad with the KK1 controller and without it's fibreglass landing gear (which ended up being very good if a little heavy). You can see the scale difference between the models, despite the same hardware.

Up front is the HK Wing Cam HD (piece of crap) which is sans battery and wrapped in electrical tape to keep it intact.

Somewhere around here, due to flying a bit with a simulator, I realised that my KK Flight Controller was in rate mode. It's the older KK1 board where there's a fixed firmware. Not sure if it came with rate mode, or whether the previous owner had changed the firmware. But now I understood why I was having such trouble learning to fly when others were flying much more stably. Duh! In hindsight, I'm glad I started with rate mode. I have learnt an awful lot about building strong and light flying machines, which I probably wouldn't have been driven to develop if I could fly 'out of the box'.

Finally I was ready to tackle APM and autonomous flight for the first time. So being on a tight budget, I went for the entry level rip-off of the HK megapirateNG AIO board. I realise that this is wrong on so many levels. It being a rip-off of the Crius AIO board which is essentially a rip-off of the APM2 board. But for $70 including GPS, how can you complain. It's also damn small and light. And I must say it works a treat.

On my second flight, I got it to loiter! Given it was quite windy and I was flying on a relatively steep slope. Funny story being that. This area is around the Kindergarden at the end of my street. It's by far not the best place to fly, but I only get time off to fly if I can take the twins (3yo) somewhere.

So you can see in the following video how I have it in loiter then brick-it when I realise the boys have run off down the street whilst I was distracted. Sorry for any intermittent Swiss-German too.

Here's a picture of the final x-quad on the right. After getting it to loiter for the first time, I decided to retire it and build up the micro x-hexa on the left of the picture.

This is the frame. Stiff balsa base plate with carbon spars (12x10) which are definitely oversized but were cheap and the right size and the same weight as the balsa. the split x form of the booms was derived from the want to have H-style straight booms passing through (like the middle boom) but it not fitting with the base plate and the props. So I angled the front and rear booms at about 45°. It's a good compromise between H simplicity and saving weight compared to the standard hex form, and when we get to the landing gear, has a useful benefit.

So after a couple of nights working til late, this is more or less (sans landing gear) the more-or-less hexa. I just made that up based on the boom configuration looking like >|< (programming in joke I guess...).

HK wing cam HD for FPV (but I will be ditching this when my next HK delivery comes).

1.3Ah 2s LiPo with voltage indicator (not in picture).. hmmm must be somewhere in a box still.

I added the helicopter training landing gear... let's see how that performs. Bit on the heavy side at about 20g (mostly due to the heavy foam balls). But as you can see, fits in neatly with the >|< configuration.

Next steps are getting it back in the air - loiter and finally waypoint following. Then get the FPV gear working. 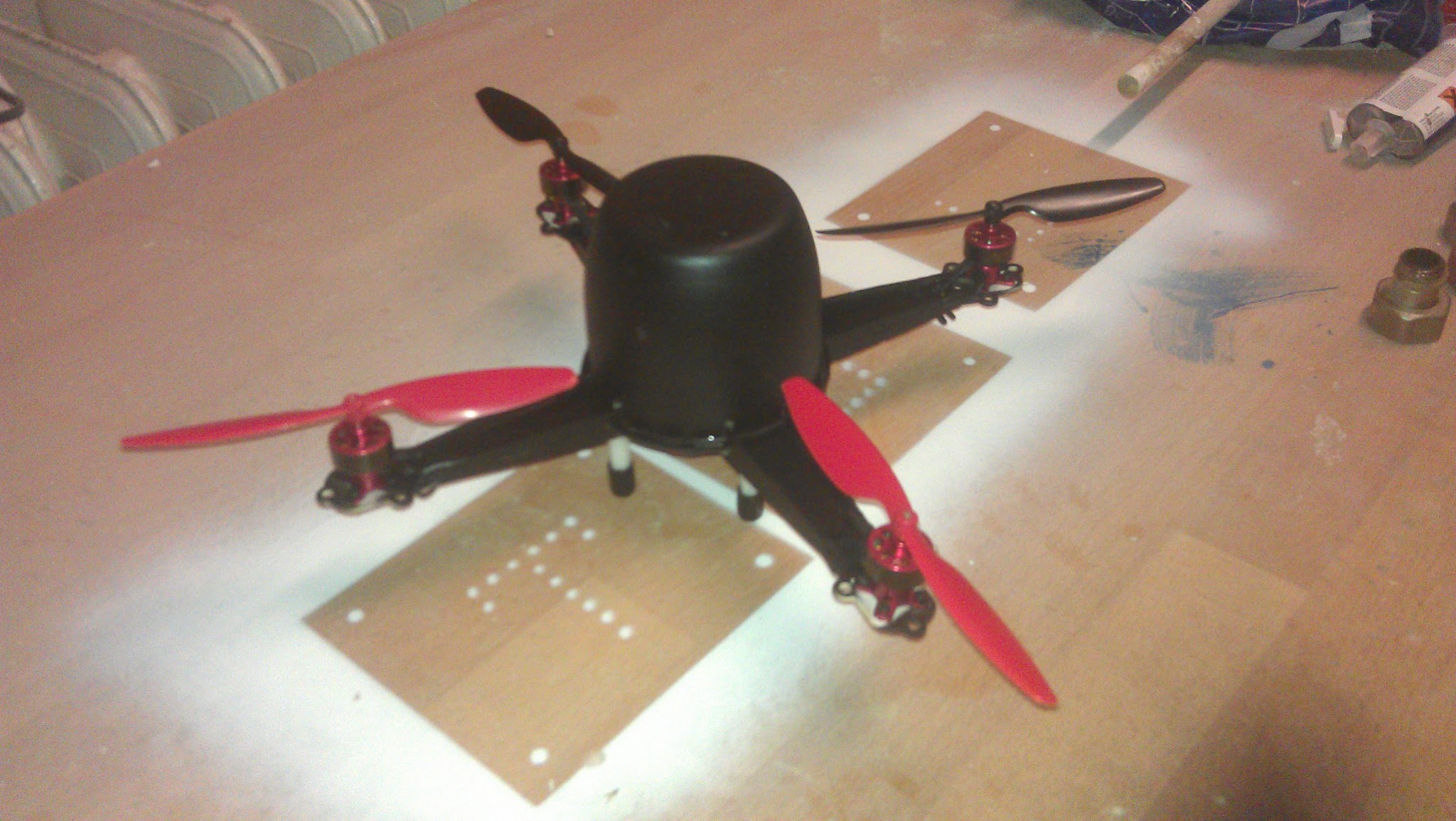 I have started in a cost effective way!

I present a used Turnigy Micro Quad, with an upturned plastic container with cutouts to fit over the KK2 board, receiver and HK wing cam HD (720p). It's squishy in there but it will do.

The whole lot is sprayed black, mainly to hide the 'used' look and the recycled plastic container from what they really are.

I did all this without ever flying it, because I didn't have my Spektrum DX6i yet. In the meantime I have got it, following a frustrating adjustment at the weekend, all I managed to do was ascertain that one of the ESCs doesn't work and that even these little ones can be dangerous beasts. I accidentally launched it with the remaining 3 motors at full stick into my face. Luckily my hand got in the way and all I got out of it was a broken prop and a small cut on the hand.