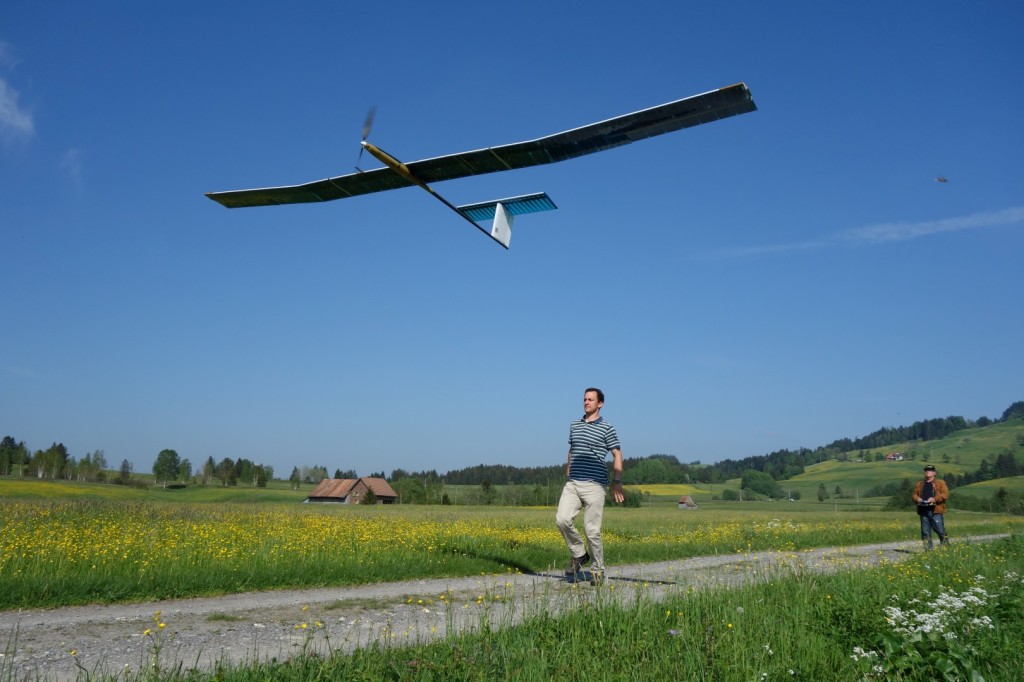 This is some really exciting news. Curious what FC is onboard. From the team:

The AtlantikSolar Unmanned Aerial Vehicle took off on June 30th at 11:14 o’clock to attempt the “holy grail” of solar-powered flight: The crossing of a full day-night cycle on solar-power alone. More than 28 hours later, on July 1st at 15:35, the aircraft landed safely and with fully re-charged batteries , thus proving AtlantikSolar’s perpetual endurance capability. The long-endurance flight capability shown by AtlantikSolar is of significant interest for large-scale disaster support, industrial inspection or meteorological observation missions, especially in the compact form of a hand-launchable 7kg UAV such as AtlantikSolar.

The flight was performed at the Rafz RC-model club airfield in excellent sun conditions. After take-off at 11:14 at 57% battery state-of-charge, the aircraft was quickly setup to follow an efficient and fully-autonomous loitering path, which allowed a completed battery-charge at 14:08 o’clock. The noon and afternoon were characterized by strong thermal up- and downdrafts, but enough power was generated by the solar panels to keep the batteries full. Their discharge started only when the sun slowly settled at around 19:30. The night flight provided calm conditions, with the autopilot keeping the aircraft stable despite horizontal winds of up to 5m/s, and the safety pilots keeping a good eye on the aircraft using its position indicator lights. Flying at an average airspeed of 8.4m/s (point of minimum sink rate) and an average power consumption of 43W during the night, the aircraft received first sun at around 5:50 o’clock, and maintained a minimum state-of-charge of around 35% until the solar modules re-generated enough power to stay airborne. After 24 hours of continuous flight, the aircraft had recharged its batteries to more than they were a day before, i.e. to 84% state-of-charge, which proved the perpetual endurance capability of the airplane. In addition, the batteries were fully charged at 12:43 o’clock and therefore 1h25 earlier than on the day before. AtlantikSolar landed safely at 15:35, thereby setting a new Swiss endurance record for unmanned solar-powered flight, and improving the previous internal record (ASL’s Sky Sailor) by a bit more than an hour.

The project’s next goal is to extend the flight duration to more than 80 hours (3 days), thereby beating the old endurance record for solar-powered UAVs below 20kg (48h flight by the 13kg SoLong UAV in 2005) by more than a day. In addition, upon achievement of 80 hours flight endurance, the 7kg AtlantikSolar would be the third-longest flying aircraft in the world, only behind Airbus Space’s 53kg Zephyr and the 2300kg Solar Impulse 2.