It also crossed my mind whilst flying down to South Africa that a Zagi or some such flying wing would be a very robust platform to play with. Having never flown a powered flying wing I made up a balsa box for engine and battery and taped it onto my Xit flying wing.

As you can tell another fine example of my engineering skills, still it worked it went like 5h1t off a shovel, a little two unstable for camera work. But if I could find a two metre span foam flying wing I think it would be a winner. My youngest Daniel demanded that it be turned back into a glider as he has most correctly spotted glider guiding is the finer form of model flying.

Next the Hobbico Superstar received the electric motor. You all know what that looks like, so here we are before the off.

Anyhow that flew, but on adding my camera did'nt.

Does anyone know a simple place for working out what a trainer type airframe might lift when temperature and density altitude have been taken into account?? I might just have to get out my E6B but have no idea what sort of thing a standard airframe would lift at ISA or how to work it out.

All rather annoying as the school that bounds the polo fields from which we fly has a small airfield, yes I said that right a small airfield. What would I have given to have an airfield at my school. Anyhow they have a few game animals, a couple of Zebra and some Blesbuck. If I can get some shots of them to my friend Lyndon Estes in the US then maybe his wizards can work out how to count them from video or stills.

I can use some ic powered airframes but I think that vibration will be an issue, maybe I will have just try that until the powers to be can be pursueded that I need a big electric glider ;-)

From inside the storm in Mooi River......

Read more…
I've just made something that I have meant too for ages. A pylon mount for my electric engine. Why you ask why.

Well it frees up the nose of the aircraft so it can carry a camera that does not see a propeller.

I made it so my battery pack fitted into the base. That has freed up an awful lot of fuselage space for whatever. It also lends some weight to the base to counter act the torque that occurs when the motor spins.

So its now a unit that will fit any aircraft that might be in my fleet.I am thinking of building a large span glider and mounting this on top, just like free flight days. 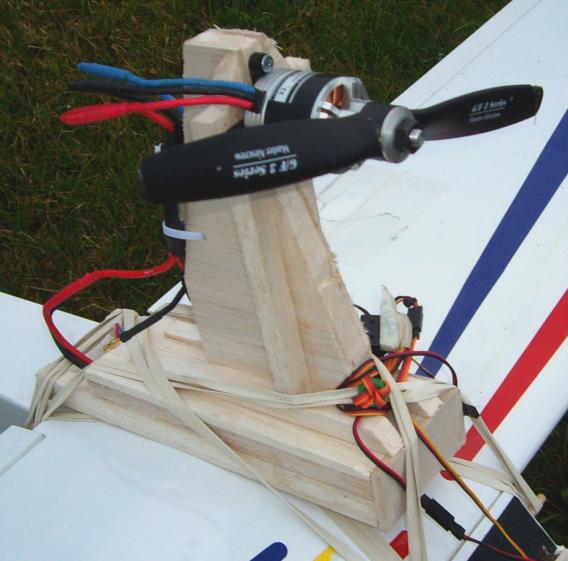 Not very neat I know but it works. If it stays on one aircraft I would make the base curve into the wing. I would also make sure that the thrust line would be built into that. Only after several groundloops did I twig what was going on. Not the sharpest tool in the box!! I will take a marker pen and draw onto the wing the place that I find to be best. A wet Perth Aerodrome, check the reflection of the model in the video clip, if the definition is high enough.

The twin sticks up front were where I mounted my camera bringing the C of G back to where it should be without adding weight. The camera mount, rubber bands. Camera Pentax Optio T10.

Perhaps somebody knows of a properly constructed engine mount. It certainly removes the need for pusher twin boom aircraft as a lot of people use but might not be massively efficient.

Read more…
Work has actively kept me away from doing stuff I would really like to get into.

The main problem being a move to cover for somebody that is ill to Scotland. Initially for two weeks but thats turned into 2 months. The point, all my gear was down south.

I went and picked it all up last week so can start again.

The weather will be the problem now!!

Anyhow I will post a video from a Pentax Optio T10, taken from a hill, East Lomand just to the north of Edinburgh.

Not earth shattering as I had the camera in completly the wrong position. Anytime I taped it in a place I thought would give great pictures the drag became too much for the slope soarer.

I thought that the CoPilot CPD4 might level the wings nicely in the rough cliff lift but instead it kept the wings rocking too much. Still nothing ventured.

This evening I will put the Copilot and RCAP3 alt hold in a trainer airframe I have and weather permitting send it off into the morning sky.

Once those two work well I will add the RCAP and waypoint sequencer.

Read more…
First Previous of 17 Next