low voltage piezo on AN6

rgb led strips along the bottom of the arms for showing armed/not armed (bottom off unarmed, bottom on armed), low batt (yellow blink), dancing lights for auto-trim (multi colour blink), and gps fixed/not fixed (blue blink) connected to AN8, AN10, AN12, AN14

superbrite red, green, white, and blue 5mm leds pointing up at the motors to light them up at night so you can see the props

I changed/added a few lines in leds.pde and it works nice on my quads and hexa.

I have an Olympus e420 dslr that I would like to lift.  The camera weighs 660 grams.

I still have to build a camera mount.

I am going too trim the square plate on the little y6 so it doesn't look so boxy.

I will update with more photos soon.

BTW does anybody have any experience with different size props on the top and bottom?

The frame is done.  It weighs 168 grams with three legs. My gopro in the case weighs 185 grams.

With motors, esc and leds the y6 now weighs in at 810 grams.

I used 3 rgb strips on the bottom of the arms and 3 leds on the top.

I used 4 2n222 transistors from the old radio shack (its The Source in Canada now) to switch the 12v leds using the 4 AN ports designated for motor mount leds from the arducopter wiki.

I have two versions of leds.pde that I am testing out.  The first one produces nice flashes with a quick on/off and the other one shows the status of the copter mentioned above.  They both work nice and I will post a video of them in action.

Here are some more pics. 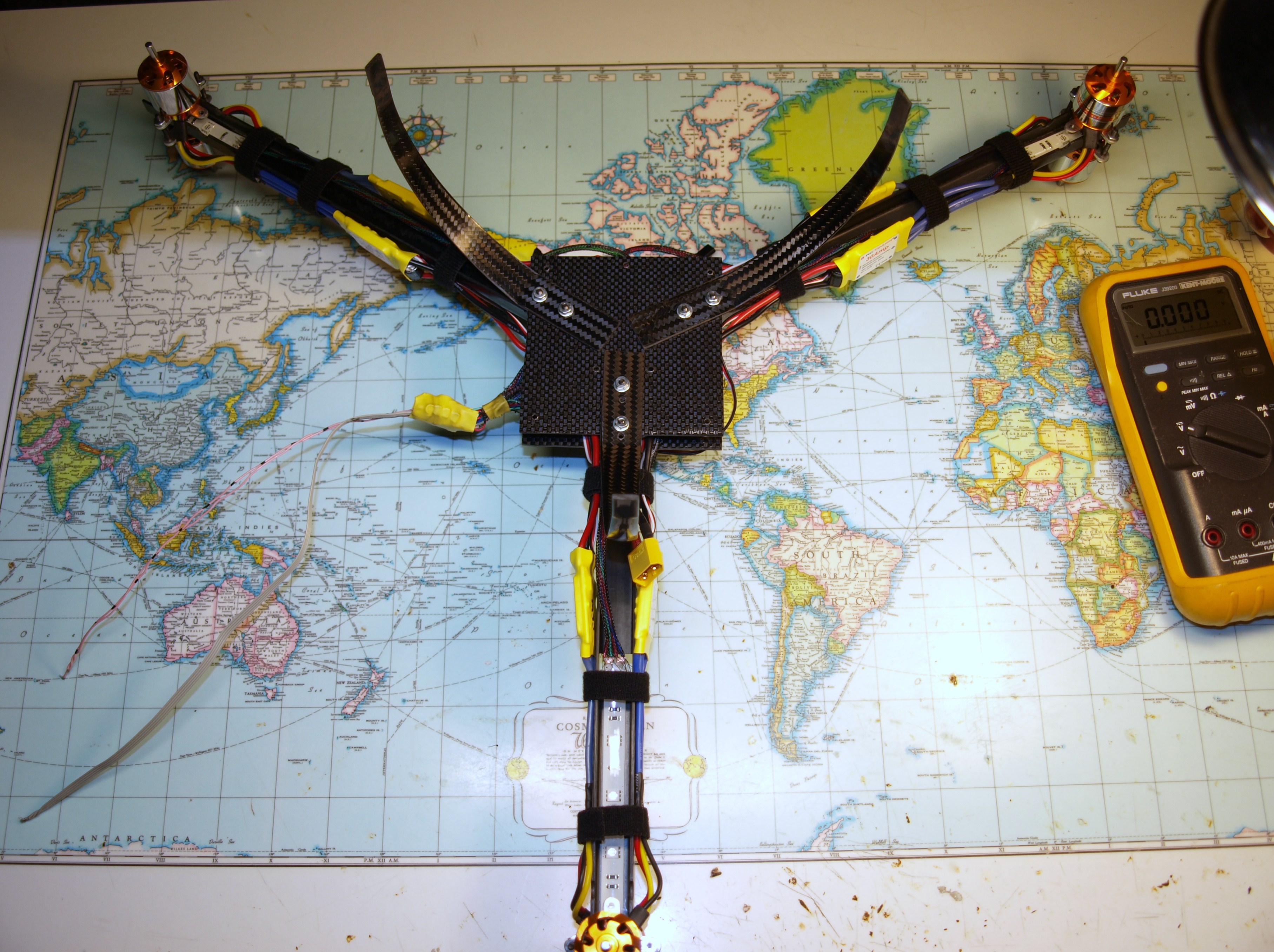 I soldered my brand new apm and had countless cold solder joints.  I bought a new soldering iron with heat control and I guess I didn't have it turned up high enough.  I mounted my mag underneath the gyros/accels with foam tape and plugged it in to the i2c port with a gps cable.  That turned out to cause me more days of misery.  The sda wire going to the mag was going open inside the heatshrink.  I could upload code but I could not enter setup cli.  It would hang right at the start.  I ended up soldering right to the pins underneath.  It works well now.  I think better than how I have it mounted on my other apm which is socketed and sits up high.  I notice in mission planner watching the yaw that it jumps around less after I calibrate the mag.  (by arming it and spinning it around like with ardupiratesNG).  I also soldered on 8 wires from a hdd cable to the an8-15 ports for leds.  And two pin headers on an6/an7 underneath the board as well for the piezo buzzer and future use. After getting the board all touched up and working I put it on my Y6 and blew the mega2560 board!  I mixed up the black and red wires on the battery monitor cable and pop.  Smoke came from the bottom.  I have another apm so I tried the new imu shield on my old apm1280.  It still works!  12 volts thru the ground rails! Yeah!  Now I leave the extension cable attached.  The new apm2560 mux chip is toast for sure. But I was able to connect to the mega and 328p chips with a usbasp on spi ports. I already ordered a new one.  Can the blown board be fixed?

I use a standard 3s or 4s balance extension cord for the battery monitor.  That works great combined with the piezo code.  The piezo beeps on arm and beeps on disarm.  When the battery gets low it starts to beep a little til its under the low voltage you set.  The default values I find work the best.  At the beginning of flight the battery voltage for a 3s is about 1 volt higher than actual.  But by the time it gets to 11.0 (thats where I currently have mine) it is right on.  All the way down to 10.6 it is accurate.

I upgraded the ppm encoder firmware to the latest to test out the ppm sum but have not had any luck yet.  The receiver is a hk-tr6a-v2 with 6ch ppm sum out the bat port.  It does work with wiicopter and 6ch ppm sum so I just have to play around or if somebody has any suggestions.  The ppm encoder sees the ppm signal I think because the blue ppm led changes states according to the wiki.  I like the new blink patterns of the encoder.  On the desktop you can watch the ppm led blink faster as you give more throttle.

Here it is all done.  I just want to build a pan/tilt camera mount for my Olympus E420 and Canon SD600.  I would like to connect both to the Arducam_OSD project. This is my copter not armed and waiting for a gps fix.  The bottom blue of the rgb strips are blinking.  Faster until it locks. 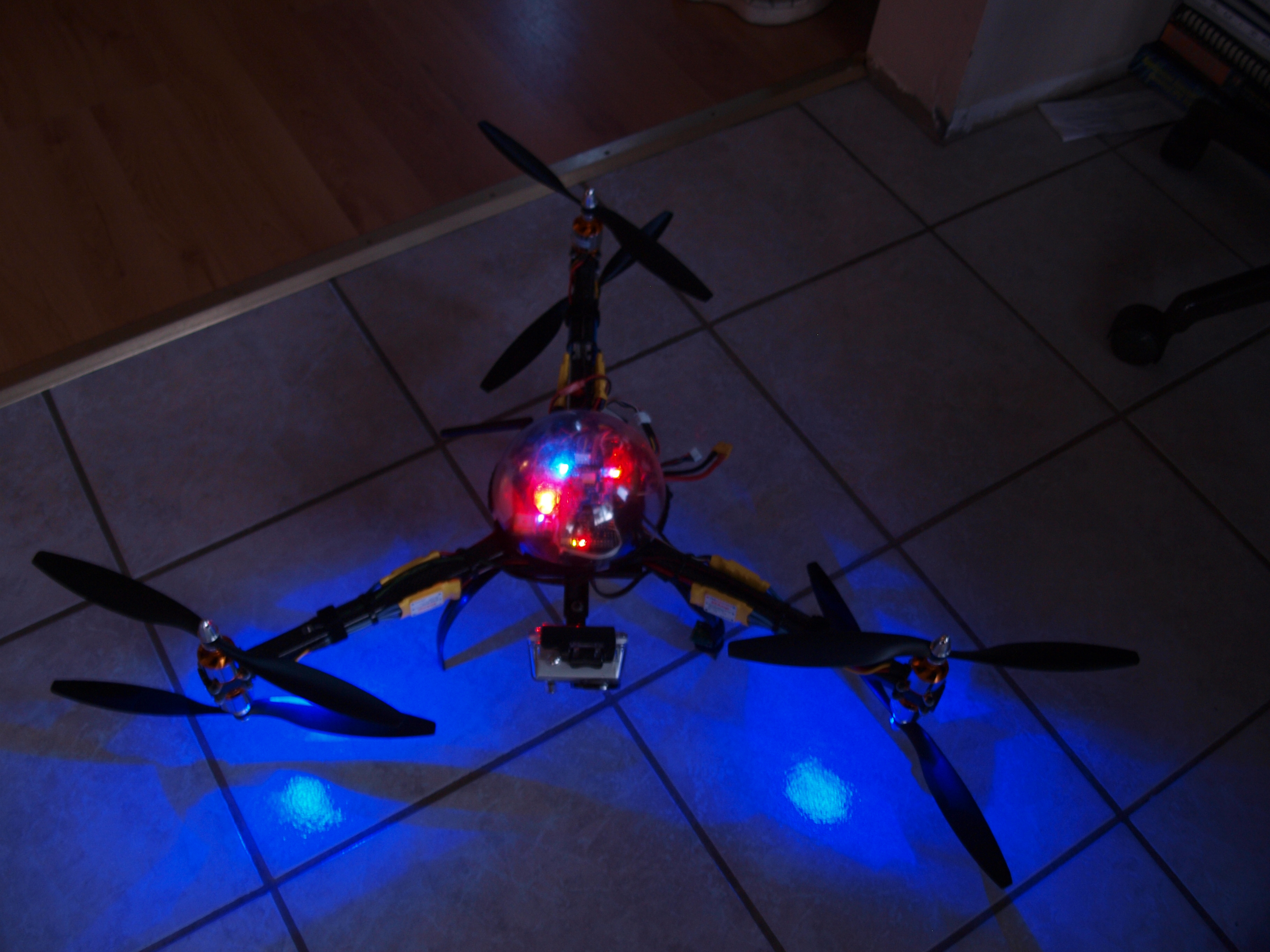 After the gps locks the bottom lights come on. 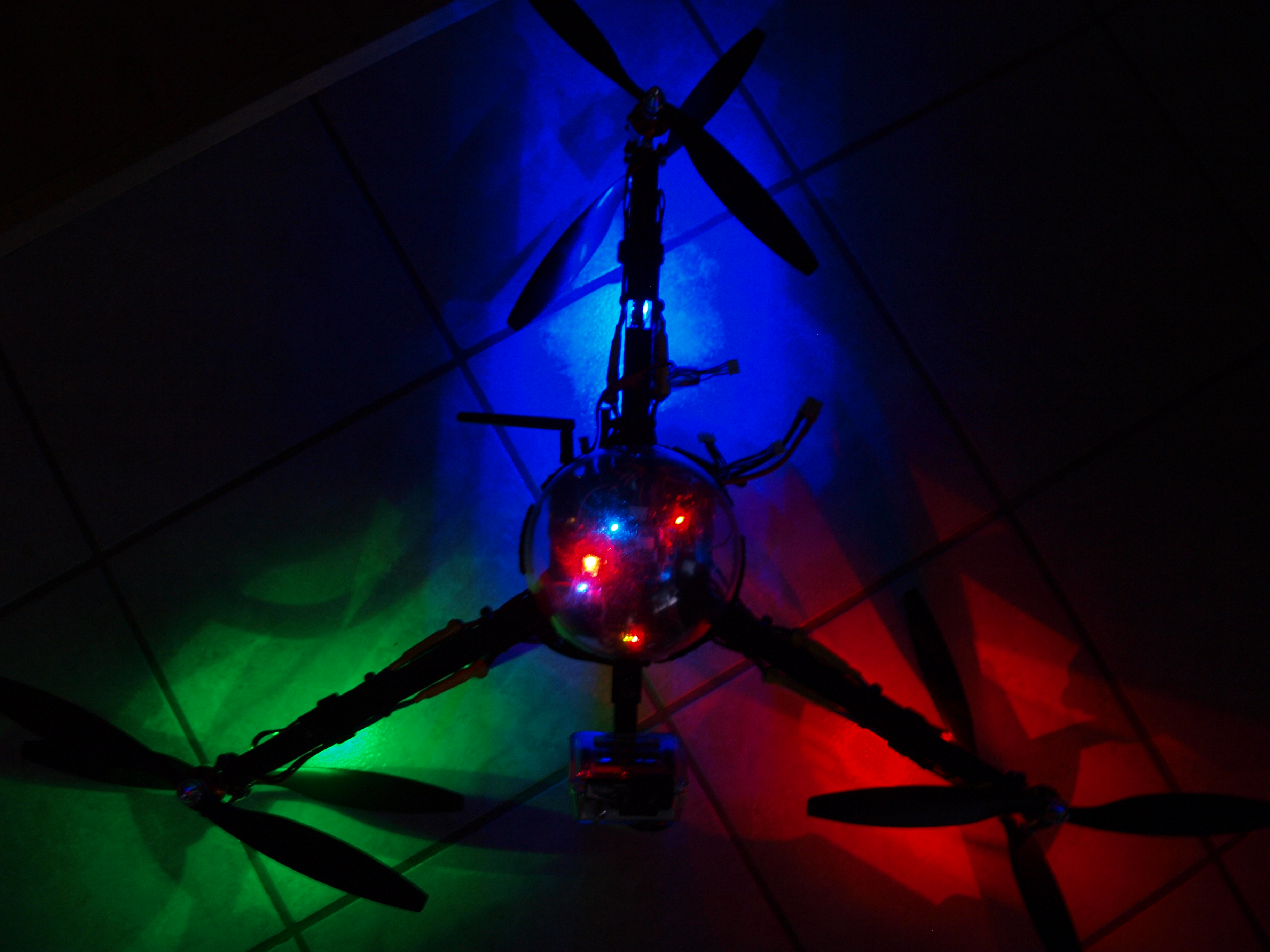 Once armed the top motor facing leds come on.  They don't look that good in the photo but when the copter is in the air at night you can clearly see the motors and props.  Makes it easy to fly at night.  They don't blink.  I had them blinking but it was annoying at night.  During the day it is better to have them blink though. 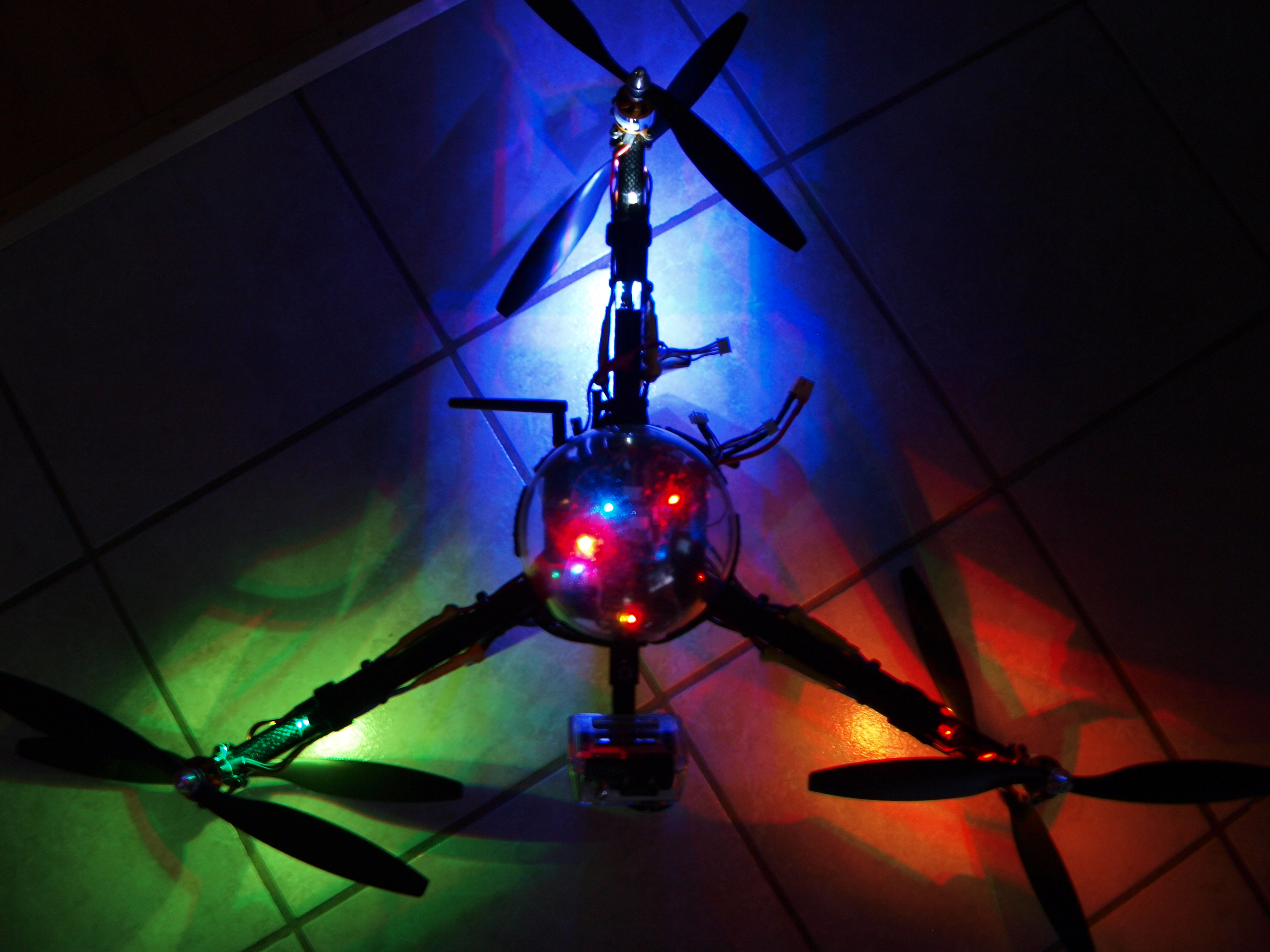 This is when the battery alarm is going off.  The front turn yellow and the back is white pink purple.  All the lights are flashing.  And the piezo alarm is going off solid.  I have the yellow b led on the apm turn on as well on low batt. I am testing out various configurations for lights for arducopter.

I have left the basic leds.pde alone and added some statements for rgb lights.

I also turn on the yellow 'b' led on the apm when in low batt condition. (good for bench testing without lights connected)

I am constantly playing around with different lighting schemes so the leds.pde changes daily.

The current scheme works well for any type of copter.

Here is a link to a boring video showing my 2nd flight with the y6 with lights on.

I am having trouble with my motors/esc starting.  I put them on soft startup and it helps a bit.

I have the ratio set at .90 in config.h but I don't know if its being used.

My low batt indication comes on at 11.0v and I was able to fly for another minute or so.

My copter all up weight for that flight is 1414 grams.

I have a LV-EZ0 sonar on my y6 attached to the bottom of the leg.  Alt_hold works perfect with no pulsing up to about 8-9 ft then it starts to pulse hard and climb slowly.  I am using all default pids except for stab P&R is currently 4.4 and stab I at .005

I am going to try various prop sizes and pitches as well as different motor ratios and I will log it here.

I like real world testing!  I am looking for some current sensors so I can monitor the current to all motors individually.