This week we were joined by Doug Weibel and Jason Short, the team leaders of the ArduPilot and ArduPilot Mega code project. They're the ones working hard on getting the APM Beta ready for release at the end of the month (alpha is already out, of course), and talked about the design and feature decisions they made with APM, as well as the roadmap for 1.0 (in September) and beyond.

RSS feed
AAC: http://feeds.feedburner.com/diydrones
MP3: http://feeds.feedburner.com/diydronesmp3
(sorry for the late post)
Read more…
Richard Hanson, who works on the AMA's Regulatory and Governmental Affairs operations. The regulatory process to introduce UAVs in the National Airspace (NAS) is a long, tortured and potentially disastrous ordeal for us. If it goes well, we'll be given guidelines or laws under which to operate, which create a category for small amateur UAVs that allows us to operate safely and still do interesting work. If it doesn't go well, we could be banned entirely.
http://www.ama-dist-8.org/Forum/viewtopic.php?f=4&p=414&sid=557ee006e7b24adccaf0279ad2232013
A couple blog posts discussed:
http://diydrones.com/profiles/blogs/open-source-hardware-draft
http://diydrones.com/profiles/blogs/x-plane-integration
Follow Richard on Twitter:
http://twitter.com/amagov

RSS feed
AAC: http://feeds.feedburner.com/diydrones
MP3: http://feeds.feedburner.com/diydronesmp3
Read more…
I realize we've asked for suggestions before but I thought it was time to start a new thread and perhaps get some new and timely suggestions. Feel free to repeat ones from the last post again if you'd still like to get them on the show.
Who would you like to hear interviewed?
Read more…
I can only imagine what happens if you were to use much larger 'copters…
Read more…

RSS feed
AAC: http://feeds.feedburner.com/diydrones
MP3: http://feeds.feedburner.com/diydronesmp3
In the near future you should be able to find a paper on the details of how this was done on Daniel's website: http://fling.seas.upenn.edu/~dmel/wiki/index.php?n=Main.Quadrotor
Motion capture system used/mentioned: http://vicon.com/
Help Daniel break into the 1M YouTube views club—sent this to all your friends!
Read more…
While this isn't strictly relevant (mods feel free to remove this post), I was blow away by this TED talk on the intelligence of crows. I hope I never have a crow take interest in any drone I'm operating.

Perhaps there would be a way to have drones and crows work together?
Read more…
Free video streaming by Ustream

Tonight we'll do podcast #26, which everyone here is welcome to participate in by listening to the chat live above and commenting and asking questions via the DIY Drones chat function. We'll be starting at 8:00 PM PST not our usual 9:00PM PST time (since our guest is a few timezones ahead of us) and will probably go about 40 minutes.

This week we'll by joined by Daniel Mellinger, who you may or may not know but there's a high probability if you're on DIY Drones you've seen some of his work making quadrotors do very aggressive maneuvers.

As always you can subscribe to the podcast here. Tonight's livecast will be recorded and available as a podcast by Tues of the next week.
Read more… RSS feed
AAC: http://feeds.feedburner.com/diydrones
MP3: http://feeds.feedburner.com/diydronesmp3
This is a great talk by Sebastian at Google on winning the DARPA Grand Challenge:
The autonomous stunt helicopters we mention are a project run by Andrew Ng, a colleague of Sebastian's at Stanford. Check out the project's website if you missed earlier posts linking to it: http://heli.stanford.edu/
Also, anyone who's website is "robots.stanford.edu" you know is just awesome.
Apologies on the audio—we both took recordings but it gets a bit muffled when we walk down hallways single file.
Read more… 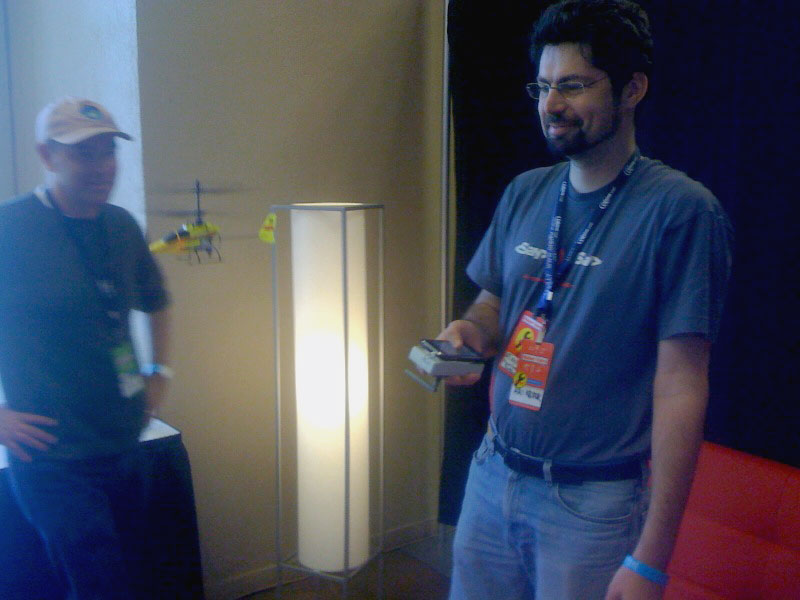 [Apologies for the rough editing and loud background noise—there were tens of thousands of people there and it was nearly impossible to find some quiet to record.]
iTunes links
AAC: http://itunes.apple.com/WebObjects/MZStore.woa/wa/viewPodcast?id=330632997
MP3: http://itunes.apple.com/WebObjects/MZStore.woa/wa/viewPodcast?id=330633212 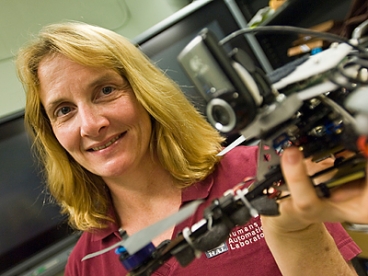 Photo: Chris talking to Pete Hollands at SparkFun
I'm sorry for the delay, this episode was recorded by Chris' phone and my laptop and the background noise required a lot more edits than usual. Jack Crossfire will be pleased to note that I found the source of the reverb and confined it to a theoretical vacuum. Of course the background noise probably didn't help (it's better at the end) but the quality should be up from here on out!
iTunes links
AAC: http://itunes.apple.com/WebObjects/MZStore.woa/wa/viewPodcast?id=330632997
MP3: http://itunes.apple.com/WebObjects/MZStore.woa/wa/viewPodcast?id=330633212

Guests include (although a couple of them may not have spoken):
And thanks to Doug Weibel for hosting the podcast in his home!
Read more… 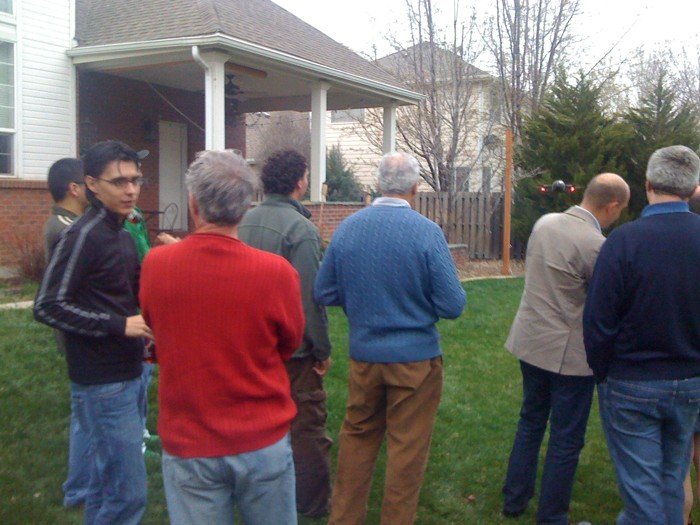 Testing out the AR.Drone (see the two orange LEDs floating in the air) in Doug Weibel's backyard—this is the podcast crew.
We recorded a roundtable podcast at Doug Weibel's (one of the main contributors to ArduPilot 2.6) house the night before the SparkFun Electronics Autonomous Vehicle Competition with roughly a dozen people involved. There were a few people who had been previous guests (Bill Premerlani, Jordi Muñoz and Ryan Beall for instance). It's a little bit different than our regular shows but I'm sure it'll be interesting!
Read more… Also I forgot to mention last month was our first month to surpass 100GB of downloads. Crazy! Read more…
Scheduling didn't work out at the last minute…
Read more…
We'll have http://www.projectandromeda.com.au/ on next week!
Read more…
This blog post is to connect anyone that's interested in:
Post away in the comments with your situation!
Read more… Nathan's addiction to microcontrollers brings peace and joy to thousands of people with the products, classes and tutorials in the seven years since he started SparkFun Electronics.

Read more…
of 3 Next