If there is anything I look forward to more than updates from Darpa, its updates from Boston Dynamics.  They are really doing some pretty innovative things in the way of robotics there, and yet here is another example.  My arducopter is jealous. 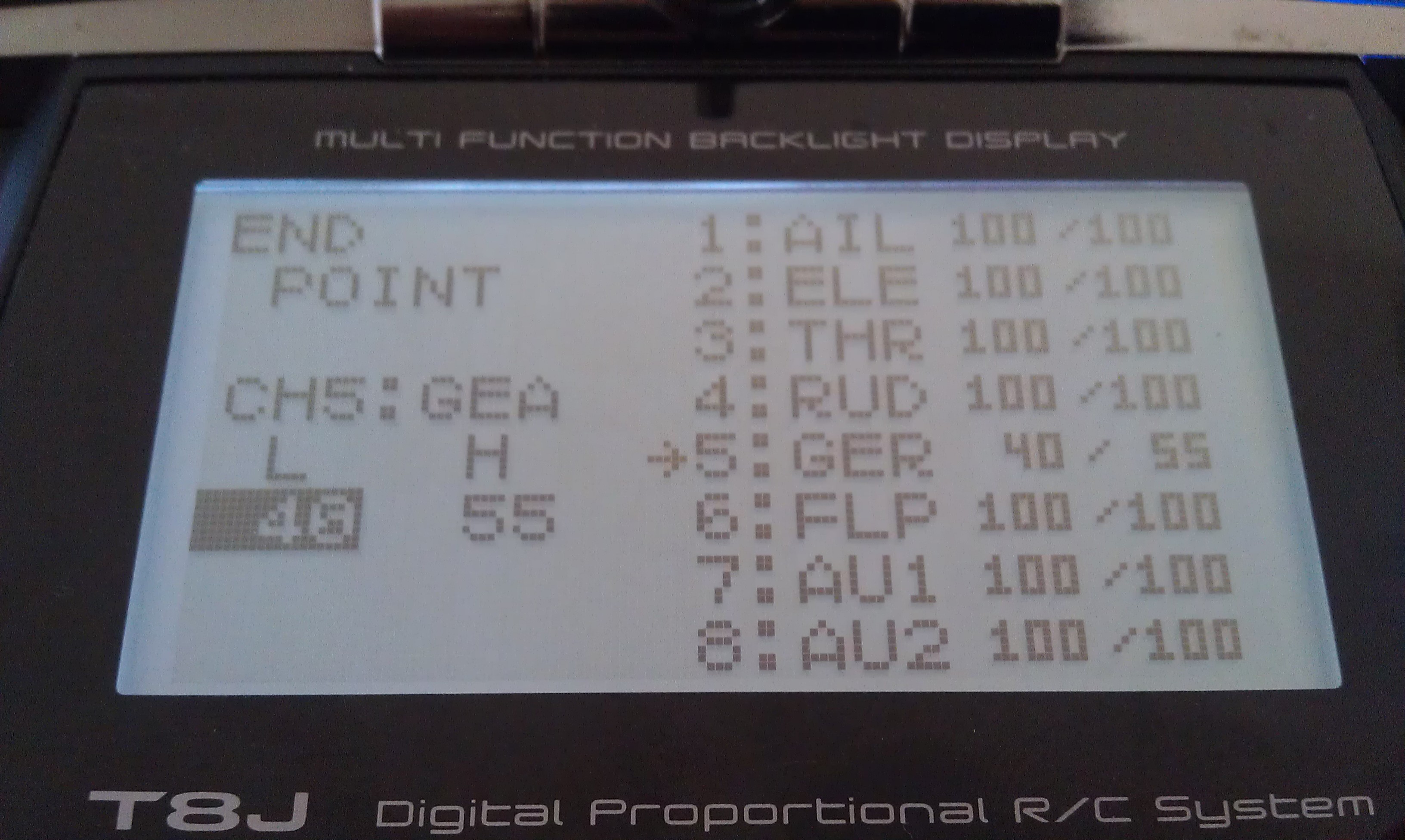 Just thought I would share my Arducopter mode setup on my new Futaba T8J, as this can be a bit of a headache for newcomers.  The new T8J radio is my new favorite transmitter.  It offers a lot of features that was only offered on the 8FG, but at a fraction of the price.  It doesn't utilize FASST, rather S-FHSS.  With the settings pictured you can get all six flight modes on two toggles. Atlas is getting a lot smarter.  He doesn't fly, yet this is still impressive. It has been some time since my last blog post.  I have kept myself busy with work and projects.  For the last couple of years I have been working on trying to develop an airframe that combines aesthetics with functionality.  Some may remember some of my previous blog posts where I presented my attempts this.

I have never been satisfied with most of the kits offered through other retailers.  They all seem to incorporate the same parts and means of construction; lots of brackets, screws, and wiring that just decrease overall efficiency.  Popular consensus is that carbon offers the best rigidity and overall structural integrity, but at a cost.  I knew that there had to be a way to bring the cost down of a high quality carbon airframe without sacrificing functionality.  At the same time I wanted to offer a higher degree of aesthetics than can currently be found without breaking the bank.

After many prototypes this is what I have come to.  The construction is about as simple as it gets, and really light.   I have greatly minimized the amount of hardware needed to assemble a solid carbon frame that can handle some of the hardest of tumbles.  Many of my previous prototypes utilized a large number of machined parts, which greatly increased the total cost to produce.  This version uses less than half the amount of previous versions.  The bodies are thermoformed out of ABS or Kydex.  The version seen here is Kydex.  The bodies are easily trimmed and then fastened to the airframe using two small nylon thumb screws.

I have been a long time supporter of the APM and DIY Drones.  You simply cannot get the robustness of an APM out of an off the shelf autopilot, especially at an APM price point.  Yes, it requires tinkering and there is a learning curve, but it is well worth it when all is said and done.  I remember a time not too long ago when the APM1280 was barely more than an expensive stabilization unit, and there were less than forty members in the Arducopter user group.  Boy has the project come a long way, and it just keeps getting better and better.  This is why all of my builds are designed around the APM.  Next will be the PX4.

I wish I had some good flight video of the unit to post a link to, but this was a custom order AP rig.  A few test flights, some tweaking and it was shipped off.  In the meantime I am working on refining some of my fabrication processes to get the production time and cost down.  The airframe pictured would cost less than half that of a comparable airframe If I didn't have to outsource some of the machining.  My hopes are that after selling a few more of these units I plan to buy my own desktop milling machine where I can cut the parts myself.  I already have the parts in Solidworks and Sketchup, just need a machine.  My goal is to offer a high quality and aesthetically pleasing airframe at a fraction of the going price.  Almost there. 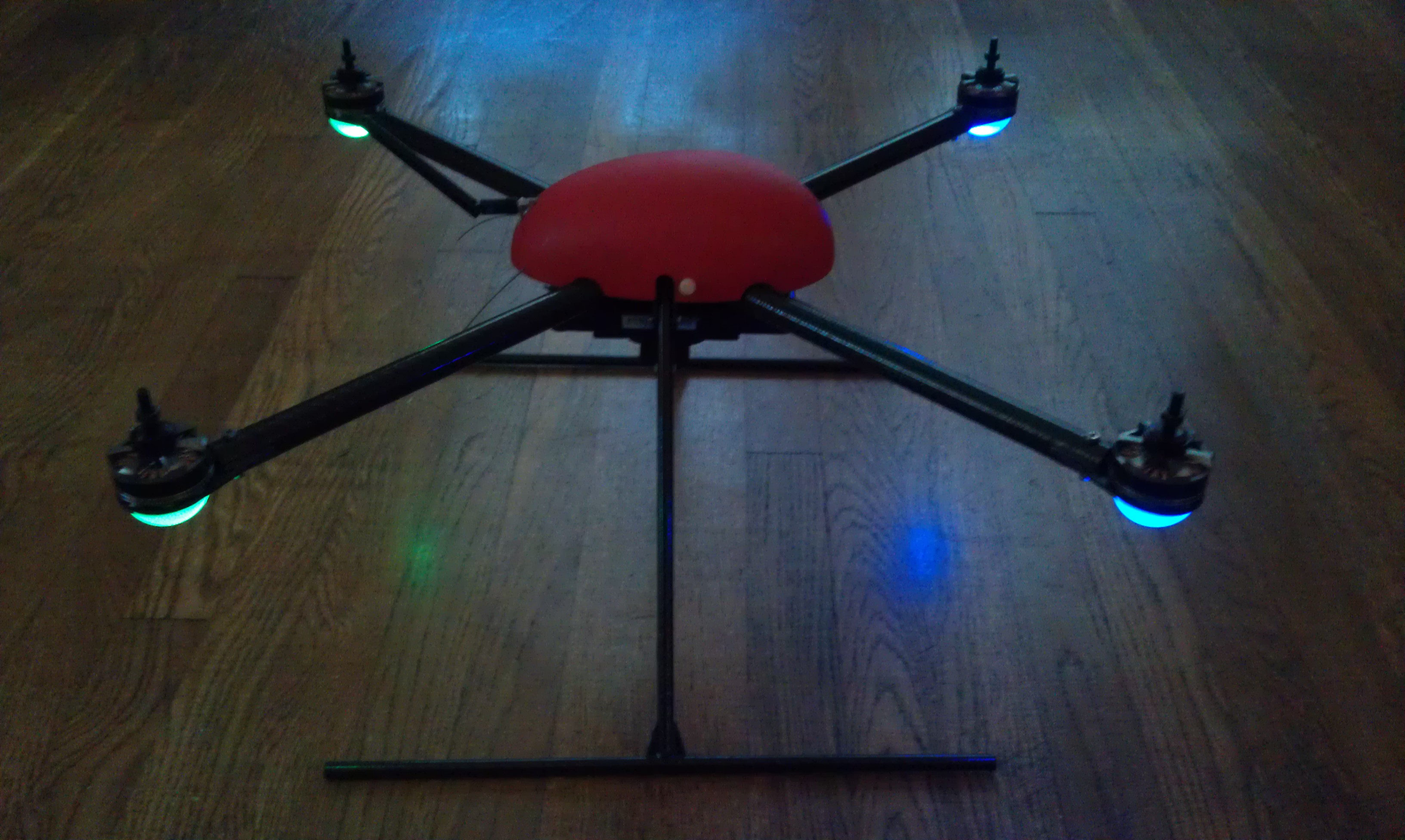 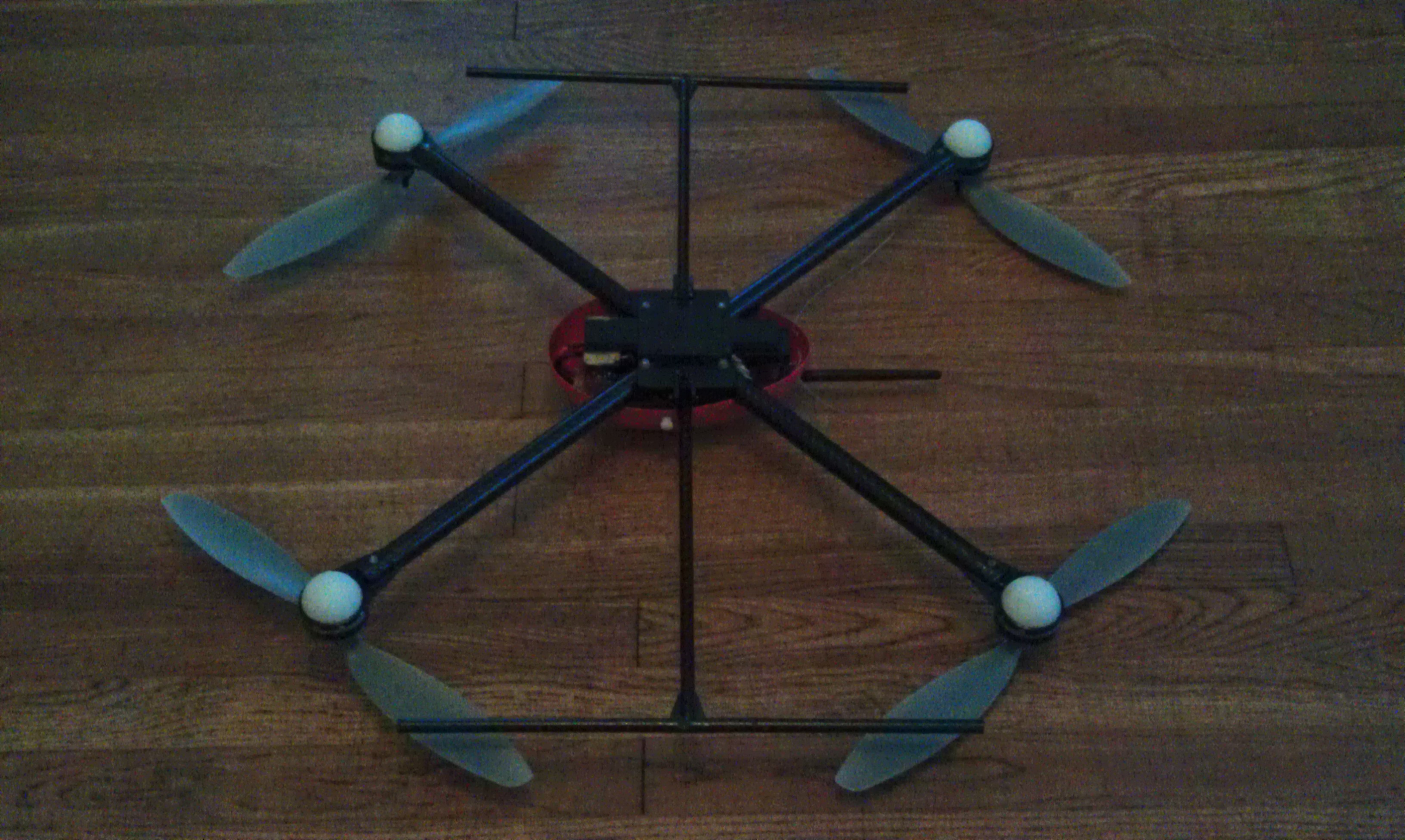 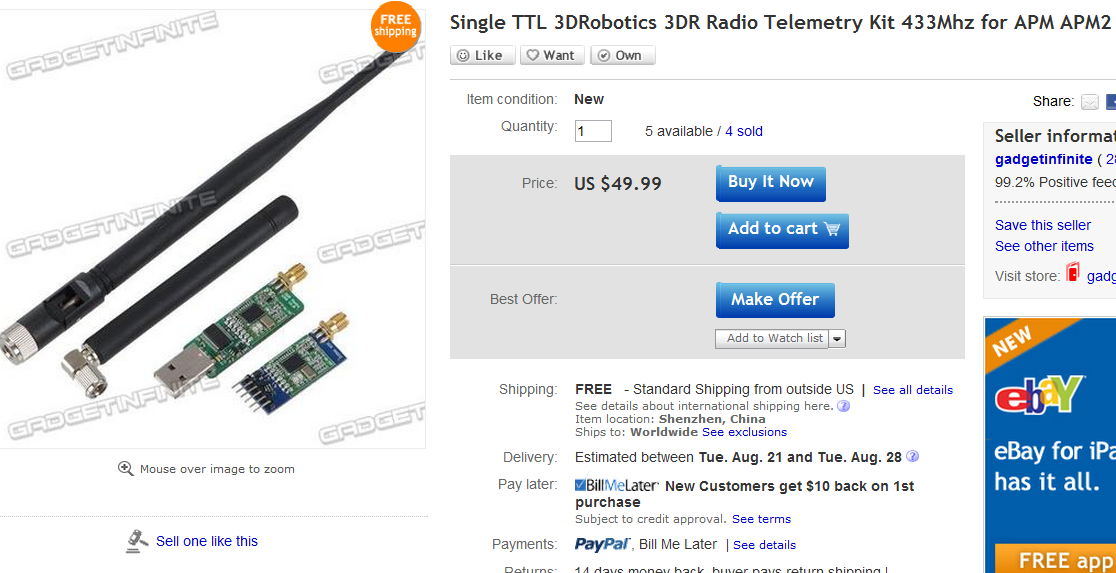 I was pilfering through ebay for some good deals on camera gimbals and I stumbled upon a store called gadgetinfinite.  They are selling several 3DR clones on their site.  I also noticed another one called game-jmt that is selling 3DR radios.  It seems there is an endless cycle of clones coming from China with no end in site.  Even though 3DR hardware is open sourced they are intent on selling this hardware using the 3DR name, trying to pass it off as original, but I highly doubt it is.

I have read several debates about the pros and cons about Chinese companies cloning U.S. merchandise.  Personally I don't see any pros.  Most of these rogue companies are only cloning to profit and not innovate.  Will there ever be any way to regulate this? Should it?  It makes it awfully discouraging for anyone wanting to bring an innovative product to market knowing that there is little they can do to keep foreign companies from cloning their ideas. The idea was to build a strong, lightweight, foldable, heavy lift platform at the bare minimum of cost.  All the components are covered and protected by an ultra lightweight fiberglass body set.  I was using carbon for the prototypes, but later opted for fiberglass to limit interference issues so everything could be enclosed within the body.  The carbon body weighs in at 80g a piece.  The Fiberglass body weighs in right around 45g (90g for both halves).

The arms are 16mm carbon fiber cello wrapped tubes.  The arms have almost a 2mm wall thickness, which makes them virtually indestructible.  40-50% of the arms weight can be drilled out for further weight saving without compromising structural integrity in flight.  The sub-frame assembly was cut from 2.5mm peel-ply carbon fiber panel (very strong and rigid, but at half the price of traditional weaved carbon fiber fabric).

Everything on this air frame is an original custom design, especially the landing gear.  I have built and flown a number of multirotors with varying success.  The quality and flight characteristics have continually gotten better with each consecutive build.  In a previous blog that I posted "Trilo-Byte preproduction prototype"  I tested the effects of using light weight shock absorbent landing gear.  Due to the efficiency of prototype landing gear I decided to incorporate them into this version as well.  Considering the amount of money that goes into an AP rig why do we still use stiff rigid landing gear when landings on even the best systems are all but perfect?  I believe that it makes perfectly logical sense to dampen the landing struts to minimize excessive force on expensive hardware and components.  The landing gears dampening systems can be adjusted with cheap inexpensive o-rings. I am also finishing up on a production quality quad build using many of the same building techniques.  I have also designed a better method for mounting ESCs', which makes them more accessible and easier to replace in the event one fails; also greatly reduces wire clutter.  I will post the quad photos and subsequent flight videos once I have finished fabricating and mounting the landing gear.

The premise behind all of my designs are to make the highest quality air frames at the lowest possible price, but most importantly make them easily serviceable with readily changeable and easy to produce parts.  Best of all, I design my frames around the ArduPilot hardware.   I will post videos and more photos soon, along with more specs.

Feel free to post your comments, questions, suggestions, or criticisms.  All feedback is appreciated. I started a blog post some time back for a pre-production prototype we have been working on called the Quattor-bit.  We have made a bit of changes after some suggestions, so we deleted the old blog and decided to start fresh with a new one.  We originally wanted to call it the Quattro-bit, but thought we might run into copyright issues ( Victorinox Quattrobit knife).  Well, it's almost done.  Everything seems to be working as hoped.

We plan on selling the frame for around $300 with motors and ESCs'.  The arms are made of thick pulltruded carbon tubes.  The body is molded carbon fabric, but we also will be offering a fiberglass version at a lower unit cost. We are trying to use as little metal as possible, screws etc.  The motor mounts are 3mm carbon panel, virtually indestructable.  The mounts are fastened to the removable arms by wrapping 15 feet of carbon thread soaked in high grade epoxy resin.  The body is large enough to hold a 11.1V 2600mah battery, and of course an APM.  It will handle motors ranging from 22mm to 28mm can diameter.  Gone are the Helicopter style landing gear.  This size is more suited for small fpv gear, which we will demonstrate with later updates.   We are still fabricating some of the parts, but this is what it will basically look like.  Welcome any thoughts, suggestions, or questions.  Couple of more videos on Youtube, just type quattro-bit in the search query.

Read more…
Before going out for another late night test flight I decided to check for updates.  I saw the Arducopter 2.0.28 was already up.  I couldn't resist, so I went ahead and downloaded.  I knew from the previous nights flights I had a bit of tweaking to do.  I was really expecting to have to adjust some PIDs' after my first run.  However,  to my surprise I didn't have to adjust a single PID.  Excellent high and low level altitude hold.  Excellent Loiter hold for first flight.  Cam stabilization working good.  Should be working on waypoints soon if consecutive flights show to be the same.  Excellent work DIY Drones! This is why I follow.
Read more…