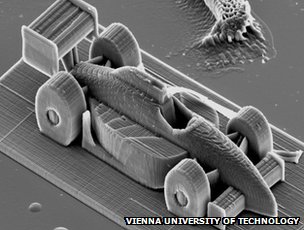 The length of the model car  is the smallest in the world is only 0285 mm, more or less the equivalent of a grain of sand.In order to achieve such a model of formula 1 car it took less than 4 minutes.. It was made ​​up of 100 microscopic layers, each consisting of 200 lines as microscopic.

The process, already well known in the scientific community, called "two-photon lithography." It is a laser beam focused on a liquid resin to make it solid, leaving behind a line of solid polymer great few nanometers. Compared to printing techniques 3d "traditional", the laser can create solid material throughout the liquid material instead of working by adding layer upon layer

It was created by Vienna University of Technology's equipment, in Austria.

It seems there are methods to increase accuracy of the GPS location to cm using a reference station network.

Real Time Kinematic (RTK) satellite navigation  is a technique used in land survey and in hydrographic survey based on the use of carrier phase measurements of the GPS, GLONASS and/or Galileo signals where a single reference station provides the real-time corrections, providing up to centimetre-level accuracy. When referring to GPS in particular, the system is also commonly referred to as Carrier-Phase Enhancement, CPGPS.

"By crossing airships with airplanes, Solar Ship is planning to build a craft that can carry heavy loads long distances with a tiny carbon footprint. Filled with helium, they soak up rays from the sun to provide the energy for forward motion and fulfill its original design challenge – carry 1,000 kilograms (2,205 lbs) of payload 1,000 kilometers (621.4 miles). The craft is heavier than air, and uses a combination of helium filling its interior and its lifting body delta wing shape to stay airborne. Solar Ship shows plans for a range of different size craft for different duties." Tired of cutting your fingers during the testing stage of your quad.

Then make some thin cardboard short propellers.Your fingers will thank you. What do you think about making a variable pitch quad  with Trex 600 tail rotor assambly parts.

It's using a outrunner motor and a servo for each 70cm blade. The Buran spacecraft (Russian: Бура́н, IPA: [bʊˈran], Snowstorm or Blizzard), GRAU index 11F35 K1 is a Russian (Soviet) orbital vehicle (in Russian terminology: "орбитальный самолет", - "orbital airplane") analogous in function to the U.S. Space Shuttle and developed by Chief Designer Gleb Lozino-Lozinsky of Energia rocket corporation. To this day Buran remains the only space shuttle vehicle from the Soviet Buran program that was launched in space before the program closure. The Buran completed one unmanned spaceflight in 1988 before the cancellation of the program in 1993 and was later stored in a hangar at Baykonur cosmodrome before a hangar collapse accident in 2002 destroyed both the hangar and the orbital vehicle. [2]

Flight into space
The only orbital launch of Buran occurred at 3:00 UTC on 15 November 1988 from Baikonur Cosmodrome Site 110/37. It was lifted into orbit unmanned by the specially designed Energia rocket, which to this day remains the heaviest rocket running on liquid fuel. Unlike the Space Shuttle, which is propelled by a combination of solid boosters and the Shuttle's own liquid-fuel engines sourcing fuel from a large fuel tank, the Energia-Buran system used only thrust from the rocket's four RD liquid-fuel engines developed by Valentin Glushko. From the very beginning Buran was intended to be used in both fully automatic and manual mode. Although the program accumulated a several-years delay, to this day Buran remains the only space shuttle to ever perform an unmanned flight in fully automatic mode. The automated launch sequence performed as specified, and the Energia rocket lifted the vehicle into a temporary orbit before the orbiter separated as programmed. After boosting itself to a higher orbit and completing two revolutions around the Earth, ODU (engine control system) engines fired automatically to begin the descent into the atmosphere. Exactly 206 minutes into the mission, the Buran orbiter landed, having lost only five of its 38,000 thermal tiles over the course of the flight.[4] The automated landing took place on a runway at Baikonur Cosmodrome where, despite a lateral wind speed of 61.2 kilometres per hour (38.0 mph), it landed only 3 metres (9.8 ft) laterally and 10 metres (33 ft) longitudinally from the target mark.[4] The unmanned flight was the first time that a spacecraft of this size and complexity had been launched, completed maneuvers in orbit, re-entered the atmosphere, and landed under automatic guidance.-

The second Boeing-built X-37B Orbital Test Vehicle, or OTV, left Cape Canaveral, Fla., at 2:46 p.m. PT, atop an Atlas V rocket, Boeing said.
"History was made in December when the X-37B became the United States' first unmanned vehicle to return from space and land on its own," Craig Cooning, vice president and general manager of Boeing Space and Intelligence Systems, said in a statement today. "The success of that mission validated this reusable and effective way to test new technologies in space and return them for examination." 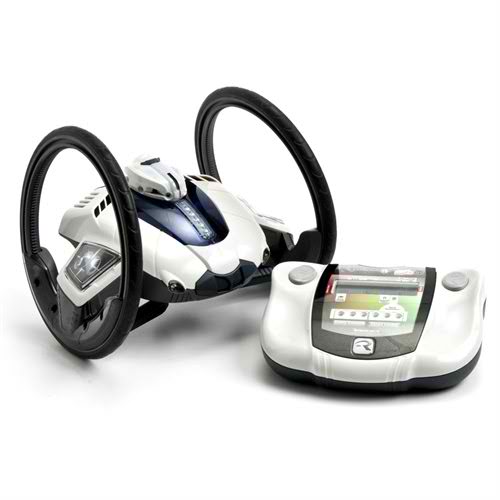 [Moderator's note: this product has been discontinued and I think the company that made it went bust, so buyer beware--this is an overstock item and may not be supported]

Features
-World’s first programmable intelligent gaming robot
-Roboni-i will grow dynamically with its owner and learn more advanced actions and movements the more it is played with
-Nimble 360° movement provides the Roboni-i with incredible agility
-Control the Roboni-i with the included wireless handheld controller to perform stunts and loops
-Uses 16 sensors and 4 processors to sense the surrounding environment
-Roboni-i can navigate on its own, avoid obstacles, play games, do tricks and interact with its environment
-Easy to customize and load with games – play on your own or against friends with similar robots (requires some degree of computer competence that younger children may not possess)
-PC-based Command Center application is user-friendly and allows you to configure every facet of your robot including reflexes and behaviors
-Roboni-i comes loaded with electronic gaming accessories, offering games of infinite variety and chance
-Create your own games or download games that others have created
-Shoot, scoop, capture and maneuver through single and multiplayer games
-Use the same remote controller offline and online
-Plug Roboni-i into your PC to join a vibrant online community – use the controller to guide your customized avatar through the virtual lunar world, play online games and run missions
-Infrared sensors to detect obstacles and interact with other robots
-ZigBee (RF) technology allows different robots to participate in team games
-Download new games and updates to your robot through USB
-For best results use the Roboni-i on a hard, flat surface
-Requires 12 AA batteries (not included) 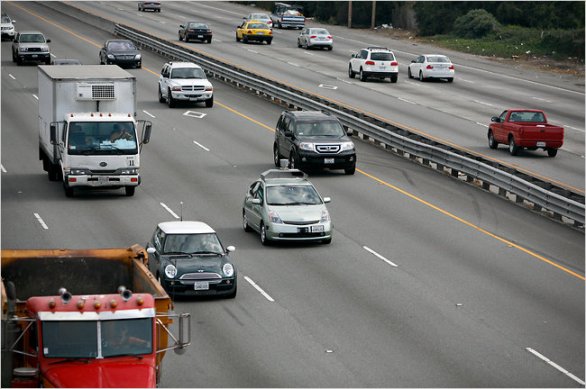 Google has been testing self-driving cars on roads in California, according to a report, and so far they've avoided everything but a minor fender bender--caused by a human-driven car.

The New York Times reports that seven test cars have traveled 1,000 miles without need for human intervention (a driver has been stationed behind the wheel just in case, accompanied by a technician to monitor the navigation system), and that they've covered more than 140,000 miles with the human chaperone stepping in only occasionally. One of the cars was even able to safely make its way down Lombard Street in San Francisco, the fabled "crookedest street in the world," the Times says. 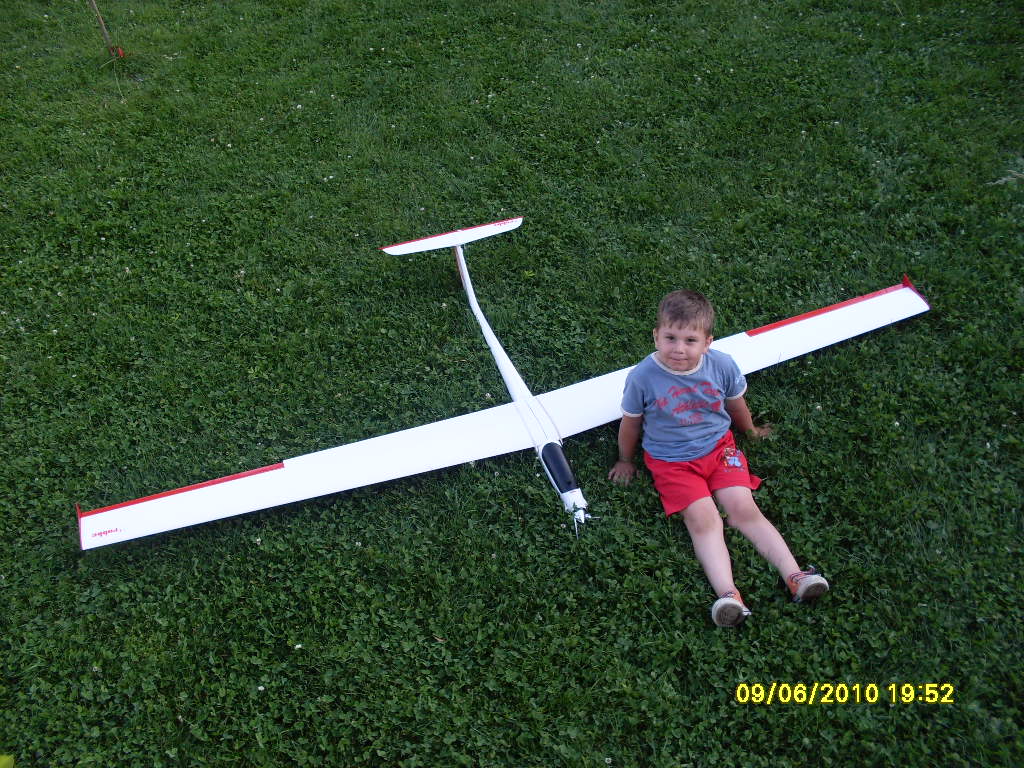 I'm new to rc planes.In a previous post I expressed my opinion about Muliplex EZ Star.Now I'm ready to upgrade to something more durable.
I see people fly all kind of airplanes:slowflyers, acrobatic, gliders,hotliners,etc.
I felt in love with fiberglass hotliners.But they come in different sizes:1.5 to 3 meters span(even more).
I almost bought the plane shown here.It's a custom made 2800 mm by 1250 mm long.
My first concern was the wing span.Is it too long for me?Will it be difficult to fly?
Because I saw a relation between wing span/vs plane weight my questions are:
What is the best ratio wingspan/weight for an all purpose glider(plane) and what is the optimum wingspan to liftoff 1kg of payload(video camera and accesories)?
My conclusion is:2800mm is too much for me.The best size is around 1500mm.
Of course this is only my opinion.
To be more rigorous I found a link on wiki describing relation between wing span and plane weight:
The aspect ratio of a wing is the length of the wing compared with the breadth (chord) of the wing. A high aspect ratio indicates long, narrow wings, whereas a low aspect ratio indicates short, stubby wings
http://en.wikipedia.org/wiki/Aspect_ratio_(wing)
Read more…
Here is a video with some airplanes that use Dynamic Soaring to fly close to 400 mph
Location:Weldon, California.
RC Gliders
reach close to 400 mph without any propellers or motors.
https://www.youtube.com/watch?v=Oix6sHKzOLU&feature=related
Dynamic soaring is a flying technique used to gain energy by repeatedly crossing the boundary between air masses of significantly different velocity. Such zones of high wind gradient are generally found close to obstacles and close to the surface, so the technique is mainly of use to birds and operators of radio-controlled gliders, but glider pilots have occasionally been able to soar dynamically in meteorological wind shears at higher altitudes.
Source:
http://en.wikipedia.org/wiki/Dynamic_soaring
I initially thought they build up a "centrifugal force" and turn tightly to make the plane go faster.But it has nothing to to with any centrifugal force.
Read more…
I know this is an endless subject, but I must tell you how disappointed I was when I tried Multiplex EasyStar.I attached some pictures of my plane.It looks good, but flying caracteristics are weak.
My plane is stock:Permax 400/6v motor with 12,5 x 11 cm propeller.
The stock version is useless for UAV and FPV.Main reason is the motor, but I also think the plane may be the culprit.Gliders may fly longer, but they go with the wind.
My Multiplex EasyStar with landing gear: 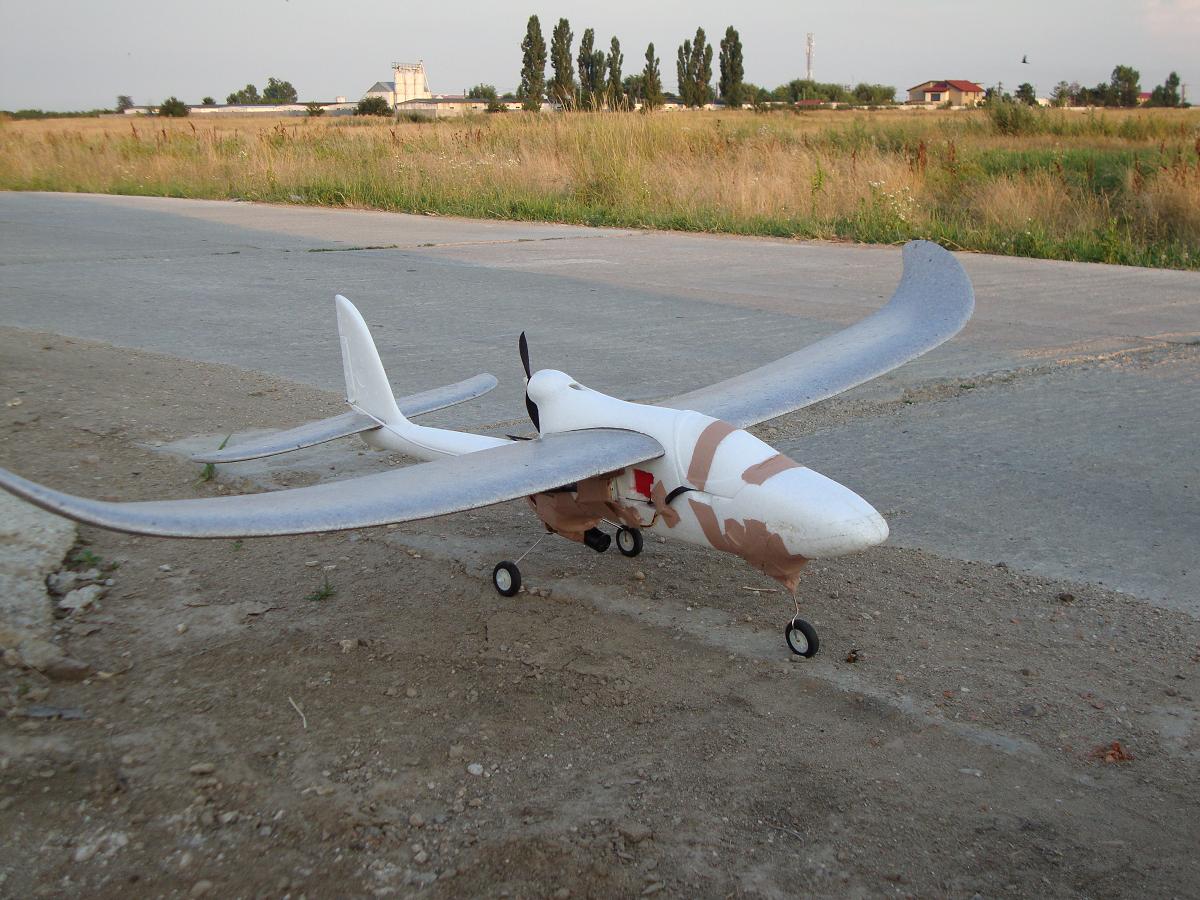 There is a reason for EasyStar lack of landing gear.The reason is its poor controling behaviour(small control surfaces and big wings) 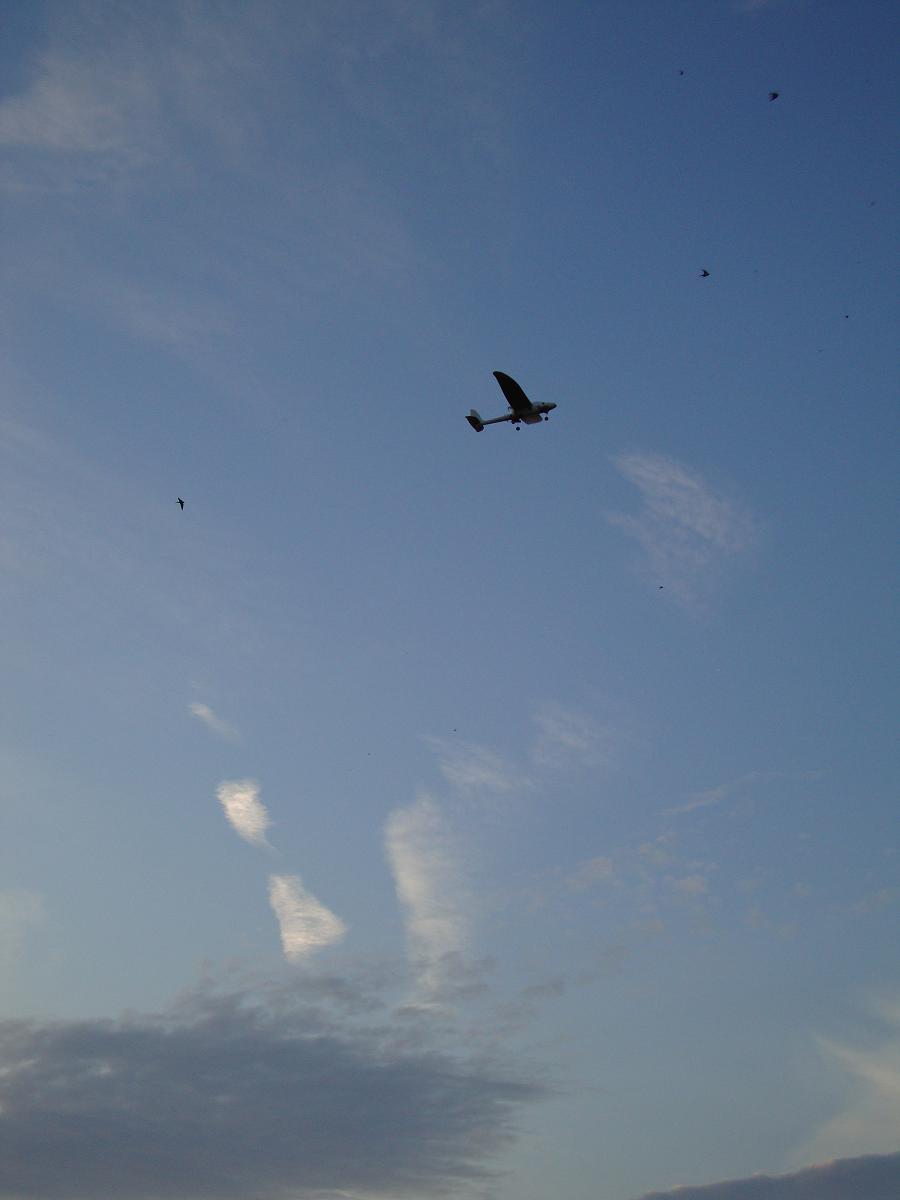 Boeing on Monday unveiled a potential new eye in the sky, this one powered by hydrogen fuel.

The Phantom Eye, an unmanned aerial vehicle from the company's Phantom Works division, is expected to make its first flight early next year. Boeing is pitching the demonstrator UAV as a "first of its kind" aircraft that "could open up a whole new market in collecting data and communications."

A decade into the 21st century, surveillance drones are nothing new considering the now long-running successes of aircraft such as the Predator and the Global Hawk. What sets the Phantom Eye apart is the hydrogen propulsion system. Although hydrogen has been bandied about for some time as an alternative energy source, it has yet to progress much beyond the novelty stage.

Read more…
On the 20th April it was revealed that a Pacific Blue 737-800 had been involved in a near miss with a model aircraft whilst on final approach to Perth International airport's runway 03. It was alleged that the owner and operator of the model aircraft had took off from a park nearby and delibretly flown the model aircraft with in 30 metres of the 737-800, this has since sparked a CASA (civil aviation safety authority) investigation into the incident. Police and CASA are continuing with their investigations. Fortunately the model aircraft intercepted the 737's jetwash (or more commonly known as wake turbulence) which in turn caused it to spiral towards the ground.Video:https://www.youtube.com/watch?v=4u7sXslgo8gI hope nobody will try to hit the Space Station with a RC Rocket :)
Read more…