Hello everyone! In 2014 we released the 3D FPV camera The BlackBird and then I published my …

The world's most portable and rugged unmanned aerial vehicle.

Bring it.  To Life.  All new website is live now at www.ascentaerosystems.com.  Follow us on Twitter at AscentUAS for more details on the Kickstarter campaign coming in May.

I put together a little geolocation simulation. This one is really simple but its simple to illustrate basic concepts and the biggest sources of error (other than GPS error) in geolocation. This simulation is setup to model an aircraft flying toward a specific target and continually tracking that target, building up an estimate of the target's position. Here is the simulation result for radial error vs slant range to target. Each line represents a different amount of…

Moderator Solo is not so Solo (alone) as digital integrated drone in apm world :) Virtualrobotix Alter Ego project is alive ... 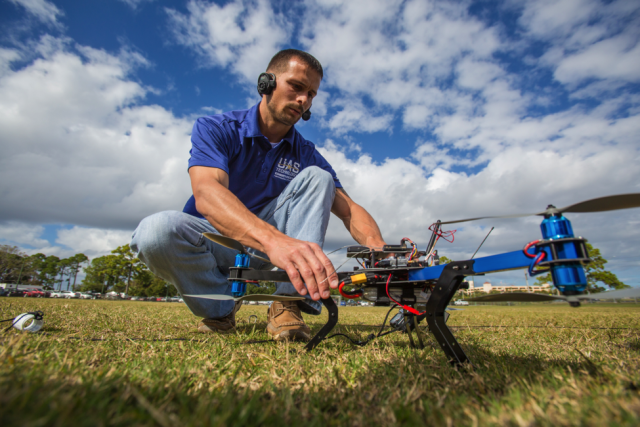 On the night of May 4, 2007, a tornado classified as a 5 on the Enhanced Fujita Scale reached the town of Greensburg, Kansas. Within 20 minutes, the storm ravaged 95 percent of the city’s… As ever we will be live streaming on our YouTube channel if the web allows it. Things should kick off at 0900 Pacific (ish)(you know what we are like))…

We here at NicaDrone are testing out a new vacuum polyurethane conformal coating application method that should provide excellent water resistance for the GNSS and the Electro permanent magnet.

Here is the test video for the GNSS, the EPM test will happen over the next few days.

An autopilot in the sky - Project SensePod

I’ve been experimenting with a small analysis package I originally called the SIXPack (Scientific X-Pander Pack). The idea is to have a module you can slap on to (almost) any drone. The module contains a microcontroller and storage device, and can house one or several sensors ie: gas, light, air sensors or… Getting tasered in national parks is probably not the best promotional use of drones.… I've mentioned on a couple of posts over the last few months that we've been hard at work developing a fully integrated ground control station and gave it the first public airing at Skytech in London last week. It is built around the patented Wing control device to enable both manual piloting and mission planner… Ah, the idea of using a phone as an actual drone controller. We keep coming back to that one every year or so, dating all the way back to my first cellphone autopilot (using Windows CE!) in 2007, to the… Just wanted to thank you for being active users and let you know what you can meet with us and see UgCS 2.4 preview at AUVSI Expo next week. Here is the new member of our growing family of modules for our scalable ground control system. Sorry for the low quality photos, but we hardly ever have time to take decent pictures before the gear leaves the workshop. You can see the other modules at…

How was your weekend?

In the meantime, here's a video of some of our weekend...

Perceptive Labs is now taking pre-orders for SHIFT, which uses computer vision to do optical tracking. It supports Pixhawk, the IRIS+ and the DJI Phantom.… Regardless of your views on Middle East conflict, everyone in this community should feel very proud after watching this video, showing APM-powered planes used for humanitarian aid. Mark Jacobsen at the Syria Airlift Project is inspiring, and I personally will be backing his work.

To make center of gravity (COG) 's tuning easier when attaching your battery on its ship, here is a quick and simple 3D printed sliding battery mount system.

Bottom plate is fixed to your plane (copter), battery is placed on the sliding tray. Sliding tray…