The Armfox V4 is my experimental platform for develop Flycam .

In my development i'm using : It's been several month, since I started this project, and this project is not moving forward as I have hoped and anticipated, due to my lack of expertise and technical diffulties involved.

Diy Drones have a lot of talented people that they actively comment and exchange great ideas, and I like to share my frame design and I'm also hoping to hear from them…

Guys is it just me or is this plane an exact Easystar clone? It's called 'The Bixler' named after Josh Bixler of the Flitetest youtube series. Here's the review and the link: To commemorate the GREAT flying code of 2.0.19, I put my CNC machine to work to cut me a new frame.  As always, I spent a few hours making sure everything looks good, and that it goes together nicely.  To do that, I used Solidworks!  I spend quite a few hours designing the frame (as you can see not entirely my design), modifying and making… 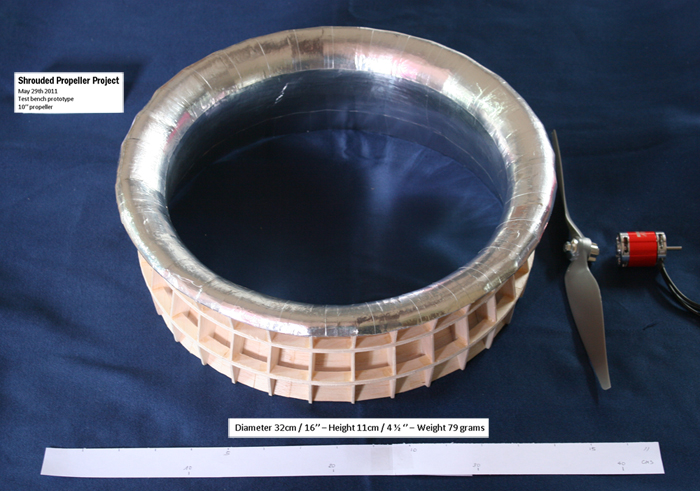 Since several months, my interest in shrouded propeller is increasing, and I started to prototype a shroud.
What are the advantage of a shrouded propeller?
We can list 3 main points:
1 - Increased thrust, compared to the same unshrouded prop. (Possible gain 30% to 100%)
2 - Propeller protection. This adds security and allows to "touch" a wall, by example.
3 - Reduced…

Now its fine if the insurance company will cover it?

From the April AMA EC minutes:

I have done a few test flights with ArduPilot Mega at the recent weekend. Everything was perfect and I decided to make a video about operating with APM at the field. I hope it will be interesting for newbies and useful for those, who wonder how APM works in real conditions.

Well it has been quite long since last update...

the project was kinda delayed.... almost all of the hardware arived.

Developer Successful 10 Km full autonomous flight of the MAJA drone with the ArduPilotMega. I went through some crashes on my Quad, and this is my solution.

I tried to reply to comments, but my reply link does not work or that may be me, who don't know how.

total weight on Quad is 3.42 pound excluding battery. flying time is gained by 4-6 minutes without carbon…

here's some footage which highlights the features found on the

'Maveric', which was on display at the recent SOFIC 2011 event,

which was held in Tampa, FL. SOFLIC stands for "SpecialOperation

The Maveric has a flexible monolithic wing made from carbon… And finally the Gopro pan/tilt mount :)…

This week I started building my MTP or Modular Test Platform that will help me someday build a full/partial UAV that will cross all 3,000 miles of the U.S.*

I constructed the modular tail section that will be able to separate from the fuselage, nestled the servos in really good to reduce drag, and placed the control horns as closely to the pivot point to increase control surface range.

I tested my electronics: I took the Servo's, Tx…

As is customary and traditional, we celebrate every new 1,000 members here. We're now at 16,000 registered members. This site currently does nearly 40,000 page views a day, and around 1 million page views per month. Growth continues at nearly 100% annually. Thanks to everyone who makes this such a thriving… Continue

RC Speedo - A speedometer app for your phone!

Hey guys!  A friend and I developed a speedometer app for iOS and Android.  It is a simple to use app that allows your mobile device to "listen" for RC aircraft passes and announce the pass speed.  Furthermore, the app also can log and export all of your pass data via email so that you can review it later.  This works great if you want to analyze how… By popular demand, those cool t-shirts and hoodies that the DIY Drones team wore to Maker Faire are now available in the store. They're black, but we'll be offering other colors in the future.

AMA goes on the attack against FPV !

The AMA responds to an article in Smithsonian Air and Space Magazine. In March, 2011 there was UAV Exhibition in Moscow which is called UVS-Tech 2011. The exposition was pretty good, however a lot of visitors opine that the number of represented companies reduced comparing with the last year. I visited this exhibition and it seemed for me that there were too few…

Developer Successful 3.5 Km full autonomous flight of the MAJA drone with an ArduPilotMega

Successful 3.5 Km autonomous flight of the MAJA drone with a GoPro HD

The MAJA drone has done a successful 3.5 Km autonomous mission under flight plan on May 2011.

The FPL is composed of 5 waypoints and the MAJA drone autopilot runs the FPL during 2 loops. The full flight have been recorded with a GoPro HD wide camera. The MAJA drone is fully steered with an ArduPilotMega (APM v1.4) autopilot with a 9D0F IMU and the…