I just got the new Pololu 3pi wheeled bot that I posted about last week, and it's every bit as cool as I'd hoped. It's quite small (those are AAA batteries in the picture, not AAs). It's basically one beautifully designed round circuit board that holds all the components and also… Continue

We don't cover military UAVs much here, but this one is too notable to overlook (from Gizmodo):

"For the first time in history, an unmanned machine has engaged and destroyed another unmanned machine in real combat. It sounds like science fiction, but it happened a week ago in Iraq, when a MQ-9 Reaper killed a remote controlled vehicle carrying a bomb.

Here's an update to the PineCreek petition to the FAA to allow small UAVs for natural resources management. It was… Continue We're all about the flying things here, but since Arduino robotics is also a focus I thought I'd pass this along. Pololu has just released a nifty two-wheeled bot based on the Atmega168. It's under $100 and looks really fun. Here's the description from the… Continue It's got six rotors on three arms, 11 sensors (including GPS) and flies like a dream. God knows what it costs, but if you have to ask you can't afford it. [UPDATE: I just got an email from them. They say "The base model starts at $14,995.00."] The new… Continue

3D Robotics Finally, a decent (albeit expensive) competitor to the Eagle PCB software I've just been playing with the demo version of Pulsonix, which is the best competitor to the aging Cadsoft Eagle PCB design software that is the standard in our industry. It looks fantastic, improving on Eagle in loads of ways such as easy viewing of the front or back side of the board without clicking on dozens of check boxes… Continue We're not a First-Person View (FPV) site, but there is a lot of technical overlap between the FPV and UAV worlds. One is the love of the EasyStar and adding cameras to it. While browsing the Range Video site, I found this cool $39 kit they sell to add a pan-tilt video camera and downlink transmitter to an EasyStar. This week Range Video is expected to release a cool new combo: an On-Screen Display (OSD) board with a built-in return-to-launch autopilot, failsafe and and visual guides to GPS waypoints. The product page is here and a long… Continue

Microsoft just announced that you can now buy the high-resolution aerial photography that it uses in Virtual Earth, without having to license the whole Virtual Earth package. I doubt our community would be in the market for this, but it does speak to the demand for such imagery, which our community could provide. The pricing was not disclosed (apparently it varies… Continue 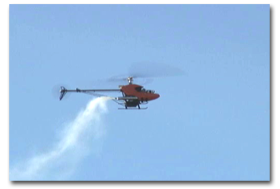 Stanford Autonomous Helicopter Project has developed new reinforcement learning techniques to stabilize and control their helicopters. The developers have been able to teach their heli to perform just about every aerobatic figure imaginable. However, the heli has no on-board intelligence. Instead, data is fed from onboard GPS and IMU with… Continue

It will be 5V tolerant on the UART pins, but you better keep those voltage dividers around until 2009. The $32 XBees… Continue

As we get closer to releasing products, I've set up home pages for ArduPilot, ArduPilot Pro and BlimpDuino. They're created as big posts at the moment, but they'll probably migrate to proper minisites with wikis once the products are out. They're all… Continue

I am happy to report that I have installed the paparazzi autopilot in one of my airframes and have done some ground testing. So far the results are positive. The telemetry works well (at short range at least), and the aircraft reports proper position and attitude. When the aircraft is held at an angle, the control surfaces move to compensate, and the behavior of the control surfaces looks correct.

In the picture below, all of the autopilot system except for the radio modem can be… Continue

3D Robotics New version of the ArduPilot board Jordi and I are preparing the final production version of the ArduPilot board, which involves the usual debugging and last-minute feature adding. The problems we've found are largely in power and noise management--we've needed to isolate the servos from the processor parts, so high current draws don't introduce voltage dips. You'll notice a couple extra diodes… Continue

3D Robotics Learn about LabView for UAVs at AUVSI meeting

Jordi and I are planning to use LabView to create the open source ground station software for ArduPilot (National Instruments has kindly donated a professional edition licence to DIY Drones). We saw a lot of UAV teams, especially academic and research groups, using LabView at the AUVSI annual meeting in San Diego, and we're starting to see more interest in the open source side of it, including the OpenG community.

For those in the San… Continue

As Jordi continues testing and improving the ArduPilot boards, I've been integrating his cool binary-mode GPS parser and otherwise improving our pre-alpha code. So I think we're now a proper alpha, which is to say that although this hasn't been tested in the air yet, it does have most of the ingredients of a basic autopilot. The Arduino code is… Continue

It's China to the rescue again, as the thermal accelerometers from Memsic are being used in thousands of persistence of vision wands at the olympics. The wands can display any communist party approved message when waved by manual labor. There are no pictures of the wands except… Continue

I’m not going to be able to work on this project for awhile, so I thought I would post about it, partially so that I don’t forget the details myself : )

For those of you who don’t know, I’m currently working on a UAV based on a Multiplex EasyStar and an Arduino Diecimila. My main goal currently is to simply get it to fly from waypoint to waypoint, but in the distant future my goal is to extent flight time as long as possible. I’ve been working on the project for the past couple… Continue

Our alpha ArduPilot code has an okay GPS parser, but like all of them based on ASCII NMEA sentences, it's slow and doesn't handle errors (corrupted data) very well. We've now done a lot better. Here's Jordi's new Arduino GPS parser, which will be in the next version of the ArduPilot code and has the following features: My other blog, GeekDad, has a review of the new WowWee BladeStar, which is like a body-less helicopter. It's got a semi-autonomous mode, using IR sensors, that lets it avoid any obstacles, from walls, ceilings and furniture or anything you wave in front of it: