Hi All.
Atlas Dynamics is proud to announce the launch of its first consumer drone, made in cooperation with Yi-technology. Our unique tricopter design and full carbon fiber hull create a new standard for quality and performance in the consumer drone space. We have reached a 40 min of flight time and have made some new features like Virtual Stick and one hand control.

Our App will be available for IPhone and Android devices. In the future we plan to release…

The CORS is an appealing way to do RTK due to its convenience and large coverage area. While…

From PrecisionHawk's post on its milestone FAA approval to fly beyond visual line of sight, in which they describe their interesting LATAS system:

New minidrones from Parrot: A VTOL and a new quad with powered accessories Parrot launched some fun new mini drones this morning that are about to make your drone educational programs even more awesome, particularly access to the Parrot SDK for app development.  Here is a nice writeup in …

SUAS News posted an article today about the Kespry Drone 2.0, a commercial drone that is advertised as requiring minimal human input during a mission. It has a forward looking LiDAR sensor specifically for obstacle sensing and collision avoidance. This might be that first commercially available drone to have LiDAR as standard equipment. We're announcing Zubax Babel - an advanced USB-CAN and UART-CAN adapter designed for use with UAVCAN and other CAN bus protocols. It can be used either as a complete standalone tool, as a development platform for UAVCAN-centered applications, or as an OEM component in larger systems.

The adapter has a…

Pi0Plane: A $150 smart fixed wing drone with the Pi Zero 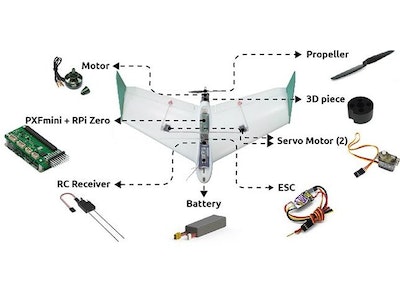 Coinciding with FAA's Part 107 going into effect we at insitu are releasing Inexa Control, our ground control station software with the Unmanned Vehicle Plugin for ArduCopter which enables control of all Arducopter / APM:Copter based quadcopters.  This is very exciting for us at Insitu bringing professional aviation tools… NVdrones just released our mobile app today, NVDash Mobile! Some of you have been beta testing our web app and we've gotten great feedback that led into the development of our Android… Get early access to demos, code and samples at …

The PX4 Pro flight control stack offers fully autonomous control of VTOL airframes including delta quads and planes, tail sitters and tilt rotors. Special thanks go to Droneslab for the airframe and UAVenture for the ongoing software development collaboration.

Obviously staged, but a fun way to advertise sunscreen!

Moderator In the USA.... Be careful after Monday Of course, you are always careful you are a DIYD member.

We are all aware of Part 107 coming in next Monday. The very simple test that will allow folks to fly commercially. Less is being said about Part 101, the bit that affects all other model aircraft fliers. If after Monday you don't have a Part 107 ticket, that's you. I speak with Loretta…

My team had been working on improvements on UX and interface of GCSs. You can read about our research on Beatriz Palmeiro's blog.

APM Rover on VR Brain 5.2 + Companion Computer + ROS and Slam mapping the navigation in outdoor done without GPS but the feedback is aligned with Geo Map because we use the GPS offset and Mag offset as starting point ...
Today was our first test without gps and it work fine ... The rover need some hardware patch and fine…


Interesting OpenSource project that use only a simple RaspberryPI 0 as DVB-S transmitter + RTL-SDR dongle  as receiver.
This is less expensive DVB-S trasmitter ever developed.
All the project is by Evariste he is a great developer and member of HAM Radio community ... now we are working togheter to a…

Last year I was searching how to fly at safe low altitude to take the higher resolution photos that possible, to identify weeds and insects in crops and trying to know if a laser altimeter can do the task, first I bought a Lidar lite but looks unstable over rought terrain perhaps bad installed or configured and no more support to ask, but, in the…

Here at Airborne Projects we have been hard at work with new ways to bring MAVLink telemetry to the ground without extra parts. Specifically we are working on an Antenna Tracker that needs information about the whereabouts of the Drone, but this is for another post.…