This is part 2. To avoid ending up trapped in the twilight zone read Part 1


Hey Guys! First, I have to confess. I lied... It did not started by looking and drawing on an autocad 2009 computer screen.


It started with some delirium about designing a different kind of quad. I talked about it to my partner and… Continue

http://www.engadget.com/2010/09/30/gopro-releases-its-budget-friendlier-179-hd-hero-960-teases-3d/
Got to love that 179$ MSRP for a HD Go Pro though you lose ability for external battery and external screen, but who cares, get this, strap it into a camera mount, maybe with an FPV camera attached for sending back fpv video, as well as for aiming the go…
Continue The five teams that made it past the qualifying did better than ever this year, but nobody won the $50,000 prize.
Here's a news report of the results. Excerpt:…
Continue


Our big new Manncorp pick-and-place machine is now up and running in our new San Diego factory, joining the smaller pick-and-place that we already had. In the above video, it's placing components on IMU shields in pairs. We should be back in full production by the end of the week. We have all components on hand, including the hard-to-find dataflash chips, so we should be ready to meet demand for ArduCopter and the public release of the APM code. (ArduCopter pre-orders… Continue 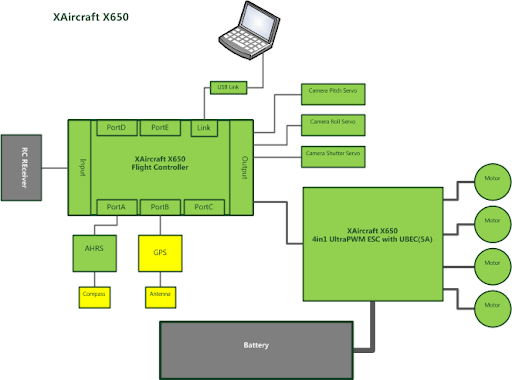 Due to most of xaircraft X650 documents are chinese that hard to get the
details of it, for convenience I will translate(poor translation) all
article on their website and post it in… Continue

I spent today figuring out how to piece together an interface to the APM_BinComm library for talking back and forth to a ground station. My idea was to wrap a serial class around the Stream interface for the arduino. By doing this there is no need to recode the APM_BinComm library. Just compile against it and go. This should make our lives easier trying to interface with the protocol for ground control software. Hopefully if all goes well I can get this added into the Arducopter svn for… Continue

The lack of updates on the Project Andromeda blog has been mainly due to the amount of work we've been trying to do coming up to the Outback Challenge competition. Unfortunately, we didn't quite make it this year but we've made a lot of progress on the different sections of the project. I've updated the blog with some new pictures and videos of our airframe, electronics and launch… Continue A quick tutorial, found here. Excerpt:
"This is a quick (REALLY quick) writeup on establishing a connection between the Arduino Duemilanove and LabVIEW. I used a very simple setup where…
Continue

I've been doing some more work on my CAS system. CAS stands for "Command Augmentation System" and implies the pilot stick inputs do not directly map to control surface deflections. Instead the pilot stick inputs command a roll/pitch request and the flight computer does it's best to match up. The video (hopefully) can do a much better job of explaining the system than words.
More details and additional "real" video footage of the system in action are…
Continue Here i have the APM and IMU Shield set up for testing the GPS. I put a small piece of doublesided tape on the GPS antenna and stuck it to the window. After a few minutes of warming up, the GPS started receiving data.

The thingy hanging down the vent is the airspeed controller.

APM is powered by the 5V adapter.…

A long and very thorough review of the Parrot AR.Drone is over at Toucharcade, a iPhone gaming blog. We;; worth reading the whole thing. Here's just the conclusion:
"…
Continue

T3 Bezmiechowa UAV contest is over.

Rzeszow university of Technology with PR-5+ Wiewior won by finding the square target located among bushes on a slope. It was about 1km from takeoff point. Find the footage from decisive flight below.Congratulations for the whole team!
Observe custom groundstation and… Continue Palentier processes aerial photographs collected from a camera aboard a MikroKopter, or similar Unmanned Aerial System (UAS) then scales, orients and projects the images to real world mapping systems. It does this by analyzing the telemetry data from the UAS and merging it with the aerial photographs. The resulting data is then superimposed for viewing in Google…


Another fun dancing quad video from the ETH Zurich team. They've got one of those awesome half-million dollar motion capture rigs, so don't try this at home! A novel UAV has successfully demonstrated 'flapless flight' in the UK.
From Dailymail: "A British unmanned plane that uses jets of air to fly instead of conventional ‘flaps’ has made aviation history.
The experimental unmanned air vehicle (UAV), called DEMON, uses blown jets of air to…
Continue

3D Robotics Arduino 20 is out! Mostly just adds support for the new Uno and Mega boards: Get it here. From the release notes:…

Moderator Outback Challenge about to start

Briefing for the four teams still to be cleared to fly starts in one hours time, 2100 BST or 2000 GMT thats 0600 in Kingaroy.
Flights should start very shortly afterwards.
The only team to actually make it through in one go, passing both the ground test and pilot competency test at the first try, Team Robota fly their challenge attempt at 2200 GMT 0800 local at…
Continue

Hobbypartz.com has great prices and great motors. I think. But for some reason I seem to be having some very bad luck frying motors lately.

I've been running one of their 450TH motors rated for 230 watts (http://www.hobbypartz.com/45oubrmo6.html) at exactly 230 watts, and haven't had much issue with very short bursts at the 230 figure of 40 seconds or less for… Continue

So i finally got my brown bag from Sparkfun. I soldered all the pins, downloaded and installed the Arduino software from here: http://arduino.cc/en/Main/Software

I wanted to try the test programs from this page: http://code.google.com/p/ardupilot-mega/wiki/Programming…