Above the Fog from Jason Short on Vimeo.


This is a video of me loosing my plane into the sun and fog for almost 5 minutes. I was just testing my AP that i've been working on over the last month and a half and it was my first flight with working waypoints. I tuned everything way down, but it was working ok so I let it run loops around the T3 course. One… Continue

No podcast this week.

We'll be back at our regularily scheduled time next week.

If people want to just hang out in the chat at 9PM on Sunday though, you're more than welcome. A routine mission to photograph NASA from our day job almost ended in tragedy as our XbeePRO 900's lost contact & the vehicle headed for a roof.

The XbeePRO 900's sucked from day 1. The problem seems to be they only do 50mW compared to the 90mW of the original XBee PRO 2.4Ghz. They also spread the signal more omnidirectionally, making for all around weaker reception.

Little X-Plane Pushes the Bottom Edge of the Envelope

Flight test programs at Edwards Air Force Base and NASA’s Dryden Flight Research Center usually are off-limits to outsiders, but we got a peek at one of its coolest programs, the X-48B, when the Air Force recently threw open the gates for an open house.

Hobby King released a new platform which might address some of the complaints with easystar - it's larger, has ailerons (and flaps), and plenty of room under the wing for CG neutral payloads. I been thinking about create a simple and relative ground station to display information in a more useful way.

You can download ArduPilot 2.4 + Ground Station Beta 2 from here.

I didn't get feedback from the community in the unofficial release, so that means that maybe is working fine.. Please tell me if you spot any bug. ;-)


Looks like it works great, but the price! They're just asking for us to reverse engineer and open source it… Continue

T3 Waypoint firmware for the UAV DevBoard is revised

Sigh....I am going to give Peter Hollands an award for finding the "juiciest bug" in the released waypoint firmware for the UAV DevBoard. The bug has been fixed, and the firmware has been re-released as version 1.8b.

The bug was in the yaw drift gyro compensation calculation. It would only show up for waypoint legs with a heading between 327 degrees and 360 degrees. The result was that the actual heading would slowly vary between… Continue

I was wondering if anyone had done any work on orbiting or managing turns? I prototyped an idea I had last night about orbiting waypoints and realized the same algorithm works for turn prediction.

On my autopilot I have running a drift compensation routine that maps the desired location of the plane onto a line connecting the old waypoint and the next waypoint. I simply look ahead 10% farther on that line and steer toward that point instead of the actual waypoint. This helps me… Continue

UAS in the NAS

Quote:
"In the near future we will see unmanned aircraft systems (UAS) operating in the National Airspace System (NAS) seamlessly with manned aircraft in all classes of airspace. To achieve this airspace integration issues must be solved in a safe expeditious… Continue

We've wanted to be transparent with the community on our plans for ArduPilot Mega to get feedback, but I fear we've also introduced uncertainty and confusion. Here are some tips and pointers that may help you plan your ArduPilot path.

First, don't expect ArduPilot Mega until well into the new year. Second, it will be considerably more expensive than ArduPilot. Third, it won't necessarily work any better than the current ArduPilot for basic autopilot functions--it's just for people… Continue First, congratualulations to Brian Wolfe, the winner of the second round of the T3 Contest. Now it's time for Round 3.

My email to SPARC regarding Sparkfun cease and desist....

Dear Sirs,
I am writing to express my disbelief and disappointment that you have issued a cease and desist notice to Sparkfun in respect of their tradename. I am a customer of Sparkfun and have bought their products in relatively large numbers in recent time. I have never at anytime confused their products with yours and...

Out of interest I went to my search engine (Yahoo UK & Ireland) and searched for 'SPARC'. The first result was "SPARC - Strategic Promotion of Ageing… Continue

Hi all, hola Jordi!. I have made some test flights with a modified arduIMU code in stabilization assist mode with good results. Mi test platform is a small swift II wing (this is not an easy plane for an IMU...). See telemetry video I have been working on an imu and AP code for some months. I have tested it and fly it and works well on normal conditions. When I… Continue

Interesting new use of Arduino

Check out this use of the Arduino...I'm not a huge fan of football (Soccer as we Americans call it) - but this is just cool! https://www.youtube.com/watch?v=KmjijvX50FQ 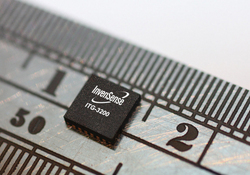 $3 in mass volume, so that has to mean under $20 single quantity.
16bit digital output using I2C Interface is nice, 16bit is a good start.