It's not the most elaborate pumpkin carving ever, but it's from the heart. Below is a time-lapse video showing the carving, imaging, and 3D modeling of this drone-themed pumpkin.…

I'm not affiliated with the OpenPilot project, but I figured it couldn't hurt to spread the knowledge - the OpenPilot Revolution ('Revo') platform is available for a limited time (orders close on November 5th).

The Revo is a very capable flight controller, based on the STM32F4 MCU, with a great IMU, built-in telemetry radio and a 5hz GPS.

I suggest you head on to http://www.openpilot.org for more information, but the… Out now. Apparently the big improvements are in 3D imagery (Austin shown above). More details at the Google Earth blog … Starts in one hours time, 2000 GMT (subject to me getting my sums wrong the countdown has started on the timer)

During the episode, we will broadcast live from a SAR training event being instructed by our co host Gene Robinson. Our guest is Chris Onions. He works full time for Rescue 3 (UK) providing training to the emergency services in water…

You ever wanted to have a training quad for quad just for fun flying. Now you can!!

We are really thrilled of this possibility to offer for FREE these micro quads for all our customers who will buy one of our Assembled KITs. This offer is valid between 1.11 - 31.12.2012

You will automatically get one of these micro quads with…

Something like a beta version of my "startup" http://www.rcdetails.info
Website and database to search motors, servos, batteries etc by a different criterias. You can check several items to compare all properties.

The PX4 firmware is improving in leaps and bounds. RC mode is very solid now (see demo above), and the full UAV ArduCopter port, which the APM dev teams are working hard on, now compiles on the ARM hardware, which is a big step. Very exciting.

We're planning a public beta of… Few days ago I posted blog about construction project of our new office. And I promised to give more updates on how things are going, well now it's… This last update  about VBRAIN add ON. In the picture you can see the first prototype of VR Neuron (Down) near the VR Brain (UP) . As you can see te board have the same mechanical design of VR Brain . The board is very compact 6x4 cm VR Brain 7x4 VR Neuron. You can put VR Neuron above and VR Brain up , connect the board by serial port and the use VR Neuron to connect…

Costly and frustrating start to my foray into hexacopters....  a heap of parts for a 3DR Hexacopter arrived last Friday, including APM 2.5, 5000mah 4s lipo, sonar sensor, 3DR telemetry link, uBlox GPS and the kit 850Kv motors and 10" props.  Asembled and working for Sat morning, with a couple of test flights in the garden Sat evening.  All good at this…

Here's some good news for people with a Turnigy 9X radio that are still using the default FlySky module.

HobbyKing has released a Spektrum DSM2/DSMX compatible module.  It has a working failsafe mode (the absence of which is a much-discussed topic), supports the popular ParkZone ARFS such as the Champ and Night Vapor, and uses the popular "Orange" line of DSM2…

Full size helicopter pilots see a RC pilot crash his P-51 high into a tree and fly down to save the day.

This isn't Drone related but I saw this on reddit tonight and thought you guys would get a kick out of it.

Warning there is some adult language in this video so I shall mark it NSFW. I know I've been quiet for a while but now that I'm almost settled into my new international home I figured I'd let you all know what I'm up to. Thanks to all my early customers and of course Jordi Munoz and Chris Anderson, Event 38 has recently joined the accelerator Startup Chile! Startup Chile is a program… 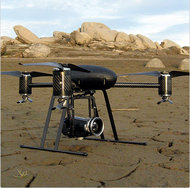 We had quite a show last week as the Seattle Police held a public meeting to discuss their plans to use small surveillance drones for various purposes. Protesters made the meeting pretty much useless - lots of loud concern over civil liberties. I fear the coverage of offensive weaponized drones combined with a general concern over past misbehaviors by…

I have been talking with Lorenz Meier about the PX4 and wanted to add a very quick blog post for the UK & EU PX4 Autopilot users, I have added the … We already stayed on our current office almost 2 years now and finally after a long search, it is our time to move to a next location. Our current office is getting just way too small and we have already expanded it to hold some of… An improved battery box for my FPV plane project.  The front wheel need mounting on a spring piece, as do the rear struts. I don't like the idea of having no suspension at all, so will probably put…