Here is a great wood quadcopter project made with Pixhawk. The top speed is over 60mph and flies for 15 - 25 minutes depending on 4s or 6s batteries. It is able to lift 15lbs with reliability and tolerates crashes very well. Enjoy the test footage.

Future tests are planned but the…

Sky Eye-36SZ is a 3-axis high stabilized gimbal with 1080P 36X zoom camera for drone inspection,surveillance,search and rescue applications.The 36X zoom camera provides 1080P 30FPS full HD video streaming and up to 432X zoom capability,which will enable you to capture every detail in the air.High-performance 3-axis gimbal is using advanced…

Surveying with the Field Hawk Check it out at … For those of you that use the US 915 Mhz ISM band or the EU 868 Mhz ISM band for video, telemetry etc. we have two new antenna offerings:

Why a PCB Moxon? Well, this layout is easy to manufacture using PCB production machinery. And with an semi-automated process comes repeatability and quality stability,…

Thought i should share this Autopilot from MAP-Technologies. This thing basically connects to anything & everything on a boat, from engine controls, lights, cameras..etc, and provides autonomous way point planning and remote capabilities via 4G, Satcom or RF. Map-Pro is a universal Unmanning kit for any boat.

Even among drone enthusiasts, many can be surprised when they learn that drone racing has effectively become a sport. Not very long ago, the “Drone Racing League” was basically being tested by ESPN, shown on television during odd hours and such. However, once ESPN essentially renewed DRL for a second “season,” so to speak, it seemed the sport was…

Time ago I posted some videos about my work for rotorcraft swarm but they were just some simulations in X-Plane... until last week! We took four rotorcraft and interfaced them as a single vehicle with a gamepad. Although this is just a first experiment, we are quite happy with the preliminary results. This setup will be available soon for… The goal was to use the case, existing gimbal assemblies and switches, and to add couple more switches and 2 potentiometers to create a…

KapetAir is a fixed wing VTOL UAV featuring patent pending rotors that is designed to become a workhorse for remote sensing operations whether they are mapping, precision agriculture or industrial inspections.… One of the common questions regarding the use of 4G/LTE on drones is if the connection still works at high speeds. Especially in regard to fast flying fixed wings UAVs.

In particular the Doppler Effect is often stated as the main concern.
Ericsson actually… 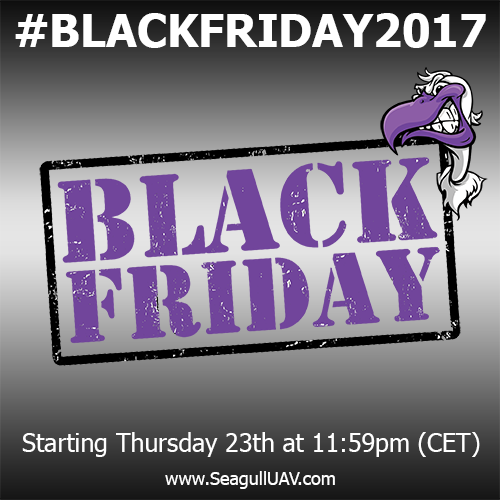 Up to 50% OFF on camera control systems and camera cables…

The race, held on Oct. 12, capped off two years of research into drone autonomy funded by Google. The company was interested in JPL's work with vision-based…

This year’s black Friday, you can find many amazing deals on genstattu.com. Many are the best deals of the year.

Firstly we are sending out a Xiao mi 4K drone as the prize of the lucky draw, which is worth $589, this is the biggest giveaway on genstattu.com of the year. Whoever come share our event page on their social media account can enter, no purchases required, it’s completely free.

Secondly you can get the best deals on batteries.  We have selected 17… For a presentation I'm doing I tried to explain how the modern drone industry grew out of the intersection of two communities, RC and robotics, and although they didn't merge, they did both evolve.

Here's where this community comes in, bridging those two…

Get a headstart with FlytPi Kit at just $149. Learn more: https://goo.gl/kyw7AP

This video demonstrates, how to setup your drone with FlytBase Cloud. You can send real-time navigation commands, get telemetry and payload data using FlytConsole LIVE dashboard. FlytBase Cloud helps…

Today we’re going to find out how long it takes to charge the Tattu 4s 1800mah 75c and what the real world flight time is, in comparison to 1300 mAh batteries which are more common for racing drones.

When it comes to racing quadcopters, flight time is not as important as it is in the case of cruising drones. More important is the take-off weight and you need to keep it as low… Last year, we introduced the Pixhawk Mini, a small, efficient autopilot designed in collaboration with HobbyKing specifically for the Dronecode PX4 1.6 stack. It’s been put to work on a variety of projects, and many of you use it to build DIY quads, planes,…

Visual Inertial Odometry (VIO) is a way to do position estimation and navigation without GPS, which is both useful for drones inside and for self-driving cars. Coming to the next release of the Dronecode/PX4 stack.