One handed plug removal, simple labeling in case the copter ends up on the ground and I'm not the first one there. Happy New Year 2013 from jDrones to all and everyone.

See you guys/gals next year ( i mean this ). We had a great year here at DIY Drones. Membership is growing at the fastest pace ever (about one new member every 35 mins), as are all the other measures of participation, such as number of blog posts, discussions, comments and pictures/videos.

Traffic is also growing nicely, and we now do more than 1.6 million pageviews per month.… I want to introduce my new copter!

A fitting last post for what has been a most exciting 2012, which saw the founding of ConservationDrones.org and ResearchDrones.com, hundreds of successful drone missions in Asia and Africa (and a…

I've had this idea in my head for some time now, finally got serious about sketching it out. Yes, I know that all the props are pushers ; ) I couldn't find the tractors and wanted to get some pics up anyway. First flights will all be with…

so here is the latest news concerning the techpod:

Got the production unit in.…

It has been a wonderful multicopter year!

Thank you DIYdrones & ArduCopter & all the member of the community!

Back in May we processed an interesting data set from Easter Island, Chile at 30 cm / px GSD. Kim Anh Hoang from the Easter Island Statue Project used the 30 cm Orthomosaic and DEM to produce a 3D Flyby of Rano Raraku and an EISP…

Interesting UAV Work Going on at the University of Calgary Over the last few of months I have been making regular visits to the lab of Dr. Alejandro Ramirez-Serrano at the University of Calgary.  Called the Autonomous Reconfigurable/Robotic Systems Laboratory (AR2SL) it specializes in research related to (from the web site): 1) Ground and aerial unconventional unmanned vehicle systems…

Moderator Idea for Roll/Tilt for the Skywalker platform

I have been thinking about a ROLL/TILT for the skywalker platform and I came up with something like this. This design is great for Roll/Tilt stabilization.… It will set them for these 2 switches MR60 Example of a Sonar installation on 3DR Quad Arducopter I have read many comments on the sensitivity of the Sonar sensor, i.e. mainly two types of issues:

-first electromagnetic interferences, electric interferences that impact the distance measurement stability. Especially the sonar sensor should be as far as possible from all magnetic/electric sources (such as the ESCs, the motors, electronics in…

More picts on our blog : http://www.aedrox.com Hello World! I made this little stuff in my kitchen. It's my third multicopter and it's controlled by an APM 2.5

I like the "H½" architecture, it's very strong resist. The washers made plastic tube are good…

Santa Got some interesting Elfs

Interesting Video i thought many guys would use it for food for thought... Anjoy it. 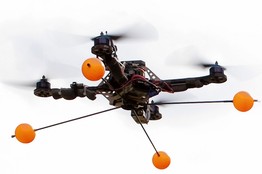 'Didn't you always want a bird on a leash?" asked the young man. He was wearing a dinosaur hoodie, with soft fabric… I've just added this page of tips on choosing radio frequencies to the manual. Corrections/suggestions?

Some tips on picking wireless frequencies

Wireless can be something of a black art, and there are a dizzying array of standards and…