I recently came across this new camera from Seek Thermal, which is the extended range version of their previous low cost system. The manufacturer claims a range of 1800 feet, which makes it interesting (in my mind) for search and rescue applications. I had previously considered the…

Snake River Shooting Products, an ammunition and firearms products distributor, is now taking aim at drones, literally. Their new Drone Munition is being sold with the fear-mongering tagline, "prepare for the drone apocalype!… 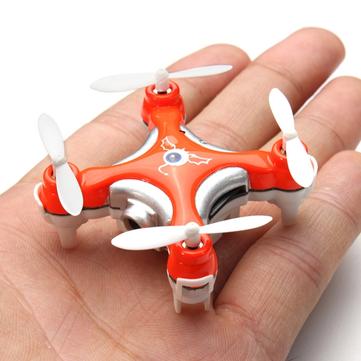 Smaller and cheaper. This is the way technology tends to move. Cheerson, who made the wildly popular CX10 nano quad, has upped the fun by adding a camera! While it is only .3mp, its hard to argue the engineering prowess to pull this off on a commercial product.…

RCLogger, the company who brought one of the least expensive mini brushless quads to market with the EYE One Xtreme, is now working on a micro-brushless gimbal for 200 sized quads. The gimbal will be capable of carrying the 1080p capable Mobius camera, a favorite among hobbyists for its size, quality, and price. The entire setup, including aluminum-framed brushless…

Please Sign This Change.org Petition to the FAA (You Can't Take the Sky From Me!)

Hello everyone. I have been active on this forum for over a year now, and have had the opportunity to discuss my slow, but steady progress in the RC multi-rotor hobby. I had previously flown RC helicopters; and planes before that.

Recently, I started working with local public service groups, consulting them about the potential uses of UAS in disaster…

World's Smallest Production Quadcopter OR: How I Decided to Turn My Kid's Playroom Into a Cheap Flying Robotics Lab!

I was recently given the opportunity to play around with the world's smallest production quadcopter, the Cheerson CX-10. While the title is certainly not given by…

UAS Used By Engineers to Document Sinkhole Under Corvette Museum

Engineers and students from Western Kentucky University used a UAS to document, via video, a sinkhole which opened up under the Corvette Museum in Bowling Green, Kentucky. The engineers were able to get video footage from within the sinkhole, allowing them to provide an initial damage assessment without the need of putting anyone in harms…

Hello all. As I have stated in here in the past, I have a particular interest in the use of UAS in the field of disaster relief operations. With a background in both emergency services and RC aircraft, I am in a unique position to see, and act from both sides. Last summer, and into the fall, I provided information, demonstrations,…

A Humorous Take on Delivery Drones

GetGo is a regional gas station in my area. Knowing my interest in all things drone, a friend of mind shared this with me on social media. I thought it was worth sharing here.

Amazon recently announced they intend to use drones to speed delivery of customer packages to their front door. The service, in testing phase currently, is to be called Amazon Prime Air. While I have no doubt they really are testing a system like this, for now it seems more like a publicity stunt. They are just the latest in a line of companies…

Continued Work Towards a "Virtual Gimbal."

One of the many projects I am currently working on is a, "virtual gimbal." The idea is that gyroscopic sensor data can be used in conjunction with post processing software to steady recorded video after the fact. This is different from existing software which attempts to determine motion based on reference points in the video, instead of direct data recorded during the flight. The reason for using a virtual gimbal as opposed to adding an actual gimbal to a…

Veterans Day (US) THANK YOU.

A video shot with my micro quad a few weeks back. It feels appropriate to share. Thank you veterans!

I wanted to post this article I came across on CNET. I think it needs some better clarification though, as the writer doesn't really spell out too much detail, and even mistakes the intent of another article she links to regarding, "hunting drones."

FAA cautiously agrees to some use of civilian drones…

Is that a DJI Phantom in your pocket? Meet the Nine Eagles Galaxy Visitor 2. This little quad, which looks an awful lot like a mini-DJI Phantom, actually carries some pretty impressive features for the size and price. I wanted to share a cool screen capture I took from my micro camera quad. It was a self-portrait of the quad (and partially the pilot) taken while flying in front of a polished black granite wall.

And, to finish the post, here is some footage from this flight. It was getting very windy, and I had flown my LiPo earlier, so I didn't want to overdo…

I wanted to share a video of my new Hubsan H107C HD micro HD camera quadcopter flying in some fairly heavy winds. I specifically shot this piece of video because it showed the flag waving, and gave some video evidence of flying conditions. It handles surprisingly well given the conditions, and I would be willing to put it up against non-gimble shot video from bigger systems in similar conditions.

Hubsan, the company who…

The quadcopter in the video is the Hubsan H107c v2, which is an HD camera quad not much bigger than a cellphone, and costs only $80. I have one of these on order after playing with the standard definition version, and finding it fun, but somewhat lacking in video resolution. While many on here will consider…

So, here is a look at the new, "drone hunting license," available from Deer Park, Colorado. It is being made available, even though the town ordinance has not been voted on, yet. That doesn't come until October. Read the article below, or link to it…

The way back machine, and looking forward.

While the vehicle featured in the video above is a rehash of the original, my first autonomous vehicle was the Big Trak. It was an amazing piece of engineering courtesy of Milton Bradley, and mine came to me thanks to my Dad's work cleaning out some old junk.

You see, in the mid-80's my Dad worked as the assistant director of a science museum. Let me tell you,…

Vacation Flying. How Long Before Everyone Does It? While preparing for our vacation in North Carolina, I packed my lightweight inexpensive HD camera quad, hoping to get some interesting video and still shots. Unfortunately, a hard landing early in the week caused one of the…