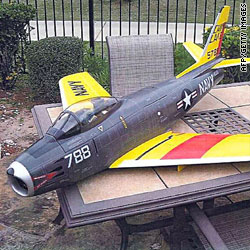 i agree totally with you about that Mark the FBI did good to stop this guy.

i suppose it was more the press sensationalizing it that caused my reaction, i dont like that the FBI provided everything he needed. but i don't know how smart this guy was, maybe he could have built an aircraft if he wanted, and the FBI was right to give him the planes as well to control the situation, i don't know. he defiantly would have had trouble getting explosives of the type he wanted, and we in this field know that it would be really hard if not imposable to do what he intended with them

i just wish that they could have found a way to take this guy out, with out making people think that our aircraft and hobby are easily capable of doing this sort of thing. there are enough people out there that don't like our hobby at all and this doesn't help

a short story: i was flying this last summer up at a local park. i was flying a small umx beast from horizon hobby it is about 18'' wing span i had just landed when this guy comes purposfully over to me and the guys i was talking to and starts yelling at us how these things should be banned and how people are flying planes into buildings and calling me every name he could think of while these two other guys i was talking to just staired at him in amazement. he was in his 60's and seemed to think the park was his. he actualy called the cops on me (they neve did show up) he thought that this little foam plane could be dangerous in a way only a much larger aircraft could, he would not listen to me, he wouldn't even let me talk, he just yelled until someone he was with came and got him. he used there phone to call the cops. this was the most unpleasant experience i have ever had in this hobby and thankfully  i have not seen this guy since, although i do try to fly when the park is empty

i try to be as good an ambassador of our hobby as i can, yet i seem to talk to people all the time that have this negative view of what we do and i hate it. i love talking to people about the cool aspects of designing and building an aircraft and i treasurer these people when i meet them.

i just wish this guy could have been stopped without the negative press. but i thank god he was stopped before it went to a point that made us look even worse. so yes kudos to the FBI and we all need to watch for this type of thing it would look much better if we in the hobby had spotted this guy and turned him in that would bethe kind of good press that we need.

I just received this from the AMA:

oh lovely more negative press, like we aren't vigilant already after this.

it would be mean and cynical of me to say that i think that the AMA likes this so that they can show how cautious they are and how dangerous everyone that's not AMA is. but since i am not that cynical i wont

Why you guys so "vigilante" like.. You all know we all can strap a honey spoon to a plane and kill!! ..whos to blame? ama, spoon mfg? honey company? Jeez..get all ur crap together and keep doing what yall do best.

They supplied him weapons, maybe even advised to use stupid plane...

If you are really motivated to demonstrate security issue, it can be done.

Please note THIS GUY GOT MORE EQUIPMENT FROM GOVERNMENT TO TRY OUT THAN EVEN VERY GOOD STUDENT IN THE SUBJECT.

This opens a completely new book full of opportunities for ambitious yet somehow less fortunate or isolated researchers without a chance for major financial success anyway, if they align a little with Islamic Way of Living. Some people do things that are challenging just because they are challenging.