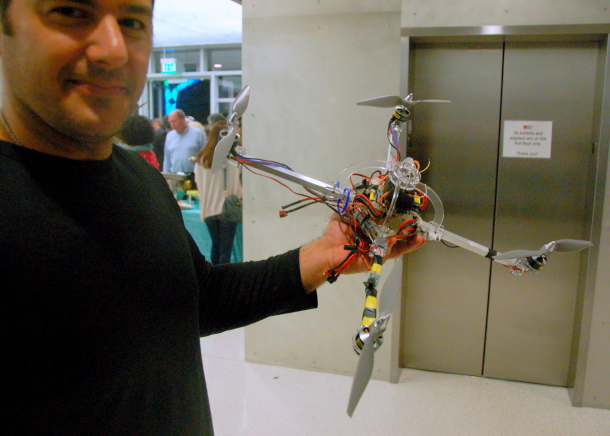 CNET reports on a cool proof of concept--delivering life-saving drugs by UAV in parts of Africa where road are poot. I've advised that team that fixed wing UAVs might be a better choice for those distances, but they're keen on totally automated delivery and return:

"At the graduation ceremony of the Singularity University this week, I was introduced to another real-world, save-the-world company that's applying quadcopter technology: Matternet.

This particular class of S.U. was focused on solving problems for "the next billion people," those without access to modern technology. Matternet tackled the problem of getting drugs and diagnostic or test materials to people in rural areas in developing countries that don't have access to passable roads during rainy seasons.

The company proposed building a network of robotic drones to deliver medication quickly and very cost-effectively--even less than a guy on a dirt bike costs.

Matternet team leader Andreas Raptopoulos told me the nominal range of his quadcopters is 10 kilometers when carrying a 2-kilogram load (range changes with load). Landing pads act as beacons to augment GPS and guide the copters to precise landings.

While the company is building its prototype business around quadcopters, Raptopolous told me Matternet is platform-agnostic. That makes sense, since fixed-wing drones would be faster and have much greater range (but they couldn't land as precisely).

In phase two of the company's rollout, it plans to add automated recharging stations to its networks, both to improve turnaround time and reliability, and to allow the installation of way stations that could swap or recharge batteries automatically to extend the range of the copters.

The business is straightforward: Matternet will charge aid companies for delivery services. Currently, Raptopolous says, the Dominican Republic is financing a pilot project for the company.

The Matternet quadcopters are based on open-source technology from DIY Drones. The automatic control systems and flight programming tools are well-developed, Raptopolous says. The flying vehicles themselves are custom built, for robustness. They should cost a few hundred dollars each.

Almost all the demos at the Singularity event were for real-world and really clever products, but this one flipped the most switches for me. Matternet is trying to create, essentially, a modern, long-distance version of the pneumatic tubes that hospitals use to shuttle samples and papers around. That technology is just as out there, when you think about it, as building giant Habitrails into buildings must have seemed at the time. But look how pervasive it became.

I'm also fascinated that this autonomous-helicopter form factor (four rotors, each with its own motor, on a platform about 3 feet across) is becoming a standard development platform for low-cost flying bots. I wonder where we'll see these things pop up next.