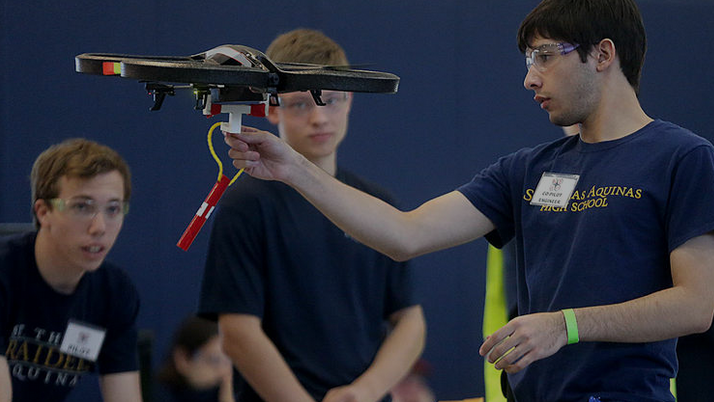 It wasn’t just fun and games as students flew whizzing drones in a gymnasium at Florida Atlantic University on Saturday. It was competition.

The statewide tournament was dubbed the Unmanned Aerial Vehicle Challenge and pitted 18 middle and high schools from throughout South Florida against one another. The local teams, including host school Florida Atlantic High, were joined by a group that traveled from as far as Jacksonville, organizers said.

Drones are remote-controlled aircraft that hover in the air and also can be programmed to fly on their own with computer codes. They snap photos, read images and fly in a half-dozen directions. Ben Coleman, a 17-year-old FAU High student, helped organize the event that drew about 150 students

“This entire competition stemmed out of my nerdiness and the nerdiness of my friends, because we just started typing, playing around with code and we found that we were able to manipulate these drones to do things we wanted it to by writing programs,” he said. “So we decided to open that up to other schools to give them all the opportunity to do that.”