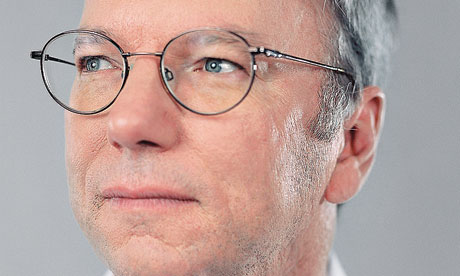 From an interview with the Guardian newspaper (UK).  [UPDATE: This is actually a repost from April. Sorry about that!]

The use of cheap, miniature "everyman" drones needs to be banned by international treaties before such devices fall into the hands of private users including terrorists, the head of Google has said.

In an extended interview with the Guardian, Eric Schmidt, executive chairman of Google and an adviser to Barack Obama's presidential campaign, warned of the potential of new technology to "democratise the ability to fight war", and said drones could soon be used to harass and spy on neighbours.

Schmidt set out the trajectory of robotic warfare and considered whether it would be confined solely to national governments. "It's probable that robotics becomes a significant component of nation state warfare," he said.

"I'm not going to pass judgment on whether armies should exist, but I would prefer to not spread and democratise the ability to fight war to every single human being.