I like to spend my time in the field actually flying and not spending hours plugging things in.

Here is the latest upgrade to my Ground Station which provides a single wire from my antenna to my laptop.

All I need to take to fly is the antenna, laptop, plane and an XBox controller.

A single USB cable goes from the laptop into the case on the back of my XBee Patch antenna.

This cable goes into a USB hub.

Plugged into the Hub is:

Also in the case are my 5.8 Ghz Video RX. I have put the antenna connector on the outside of the case so I can either use a small rubber duck antenna or connect it to my 5.8Ghz patch antenna which also fits on the stand with a short extension cable. 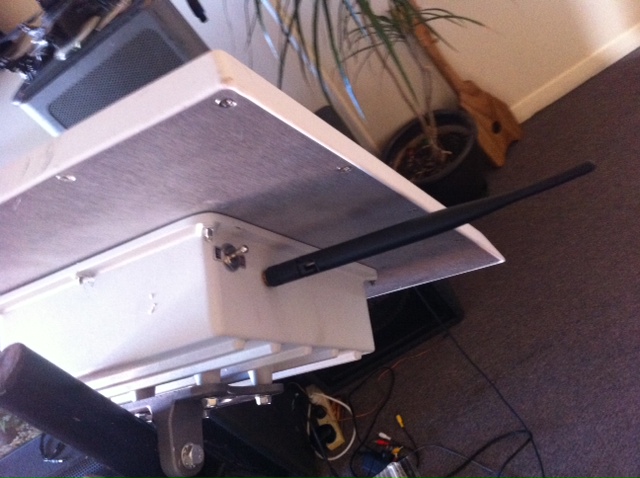 The Video RX outputs to the USB capture card which sends live images over the same USB cable as Telemetry to my APM planner where I overlay the picture.

There is a 2200mAh LiPo which provides power to the video RX. So I don't have to keep opening the case, there is a charger inside the case with a power input on the outside so I simply plug in a power pack to charge it up, or connect it to a power cable I have in my car.

The second photo shows it with the antenna on and you can see the power switch for the Video RX.

The stand it is mounted on is an aluminium commercial speaker stand so it is light, extremely durable and folds up very compactly to sit on the back seat of my car. On the other side, you can see the long USB cable that enters the side of the case and runs to my Laptop. The Video RX charging connector is underneath.

The tray holds my notebook so that I can use the mouse while holding my plane.

The 900Mhz patch antenna is 14dBi so you don't have to point it directly at the plane unless you are on a long distance mission. The whole center piece swivals and the patch antenna also tilts up and down for more precise alignment.

This setup is for my new Ritewing Zephyr which has almost finished construction. Once its done I'll post pics of it and hopefully I'll get around to making a video of the whole system in operation.

Below you can see the GS being used in the field prior to the latest upgrade (shows the laptop stand in action). 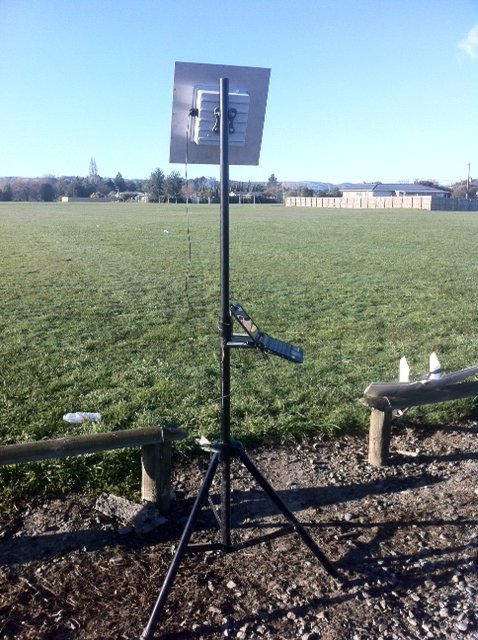 Thanks to Michael for adding Elevon mixing to the Joystick control in the APM planner. That was the final piece of the puzzle to getting this up and running.