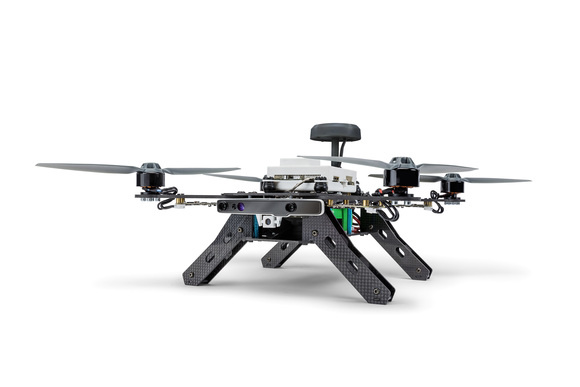 I'm excited about this, not least because Aero will support the Dronecode stack out of the box. From PC World:

Intel in December will start shipping a fully loaded drone kit to let you do just that, with all the parts including the rotors, software, 3D camera and flight controller. Intel's Aero Ready to Fly Drone kit will go on sale on the company's website. An Intel spokeperson couldn't immediately provide a price. But it won't be cheap—likely more than $600.

The quadcopter kit has parts that Intel uses to build its own drones. On the company's part, the drone airshows it has organized are getting ambitious: the company has put up 100, and most recently, 500 drones in the sky.

Drones themselves are getting sophisticated. DJI's Phantom has chips and 3D cameras that can navigate safely while avoiding collisions. The Intel Aero Ready to Fly Drone kit has the 3D RealSense camera, which can measure distances and recognize objects and help the drones, when programmed correctly, to fly autonomously to a given destination.

The 3D RealSense camera attaches to a central computer called the Aero Compute Board, which gives the drone its computing horsepower. (Intel also sells the Aero Compute Board separately for $399.) It is powered by a quad-core Atom X7-Z8700 CPU code-named Cherry Trail. It also has LTE, 802.11ac Wi-Fi and a flight controller. The board also has 4GB of LPDDR3 RAM, 16GB of flash storage, a micro-SD slot, a micro-HDMI port, and a wide set of connectors for adapters and breakout boards. It also has the Altera Max 10 FPGA, which can reprogrammed for image recognition, navigation and other deep-learning tasks.

The drone will work with the Airmap software development kit for navigation. Programming will also be required to put the drone in the air. For example, you can use the RealSense SDK to program image recognition for the 3D camera.

An overview on how to build drones from the recent Embedded Linux Conference Europe 2016 is available on Youtube.

The kit will ship in some countries in North America, Europe and Asia. For U.S. buyers Intel has included a caveat relating to government regulations on requiring authorization to fly drones.