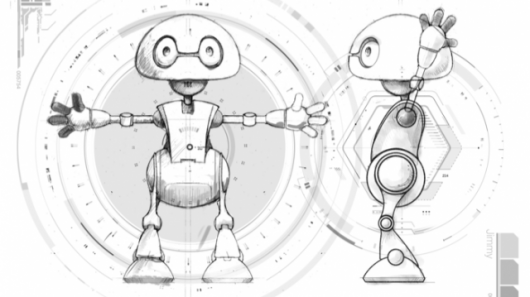 Johnson's job is to advise Intel as to what innovations may be expected in the active marketplace roughly a decade into the future. His use of science fiction writers as projective futurists in Intel's Tomorrow Project is well known.

With the 21st Century robot project, Johnson plans to introduce an easy to build, completely open source, human-like robot that can be built created from a kit and a home 3D printer, then stand back and see what a group of highly motivated makers do with it. 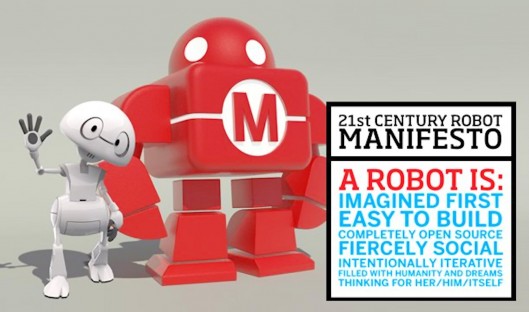 The open-source software, 3D printing files, and the kit are projected to be available next May. The vehicle for the project is a book called 21st Century robot, which combines science fiction with a how to guide for creating your own robot. A "work in progress" version of the book can be downloadedhere [PDF].

Although there are no firm details at this stage, the kit will reportedly consist of processors, memory, servos, power packs, and other parts to enable easy construction of a robot. Jimmie (Johnson's name for his prototype, which is at this stage just a shell) is roughly humanoid, about 20 inches (0.5 m) tall and has a strong family resemblance to Aldebaran Robotics Nao robot (my personal all-time favorite robot). Interestingly, Intel was one of Aldebaran's major third round VC funders.

The target for such a kit is highly focused, as only rather accomplished makers will have the 3D printing capabilities at hand, and also the electromechanical and software chops to turn a kit into a working robot to be upgraded, modified, and taught new tricks. Johnson wants to make the kit available for US$500-1000. Comparing this to Nao's $17K price tag, it's clear why such a kit may be popular.

While we can only speculate about Jimmie's base capabilities at this stage, it is being described as a companion and helper. We expect that Jimmie will be able to understand and speak some subset of a spoken language. Also, it seems likely that it will be able to walk about and have some ability to grab and manipulate objects – particularly as Jimmie appears to have inherited Nao's opposable thumb.

We'll bring you more details as they become official. In the meantime, you can watch Johnson talking about the project in this CBS News interview.