After some decent results described in my previous post regarding PID tuning for high winds: http://www.diydrones.com/profiles/blogs/pid-tuning-for-high-winds, I wanted to see what it would take to get the best possible flight path with the least amount of flight planning possible. The end result was a three waypoint 90degree corner, as shown below. The problem of course is wind... The above path was with no wind whatsoever, as soon as high winds are added the entire thing falls apart completely, as the plane often missed the last waypoint in the downwind turns and has to circle back.

I figured that if I could get a near perfect flight path with just three waypoints on each corner, what if I went back to using a single waypoint, but simply increased the waypoint radius such that the plane had enough room to make a perfect turn. In theory this should at least be flyable in high winds without having to circle back to hit any of the waypoints...

Unfortunately this failed as well, due to what I think is the Xtrack entry angle, and possibly a bug, or at least odd behavior from my understanding.

It appears that the plane always tries to approach the path at the Xtrack entry angle after a turn, but it also always overshoots the track by a similar angle then has to correct itself. I created the following path by starting with a 90degree Xtrack entry angle at waypoint #2, then cutting that in half for each subsequent waypoint until waypoint #5 where it was 11degrees: I can understand some overshoot after waypoint #2 (90degree entry angle), and even #3 (45degree), but #4 (22.5degree) makes no sense to me. Its such a shallow angle there should be no problem whatsoever straightening out at the track and following it right on, especially with a Xtrack gain of 225 as shown below, but Ardupilot is still pointing the plane *off* the track (based on the green line) until its well past, then it finally corrects and gets it right. 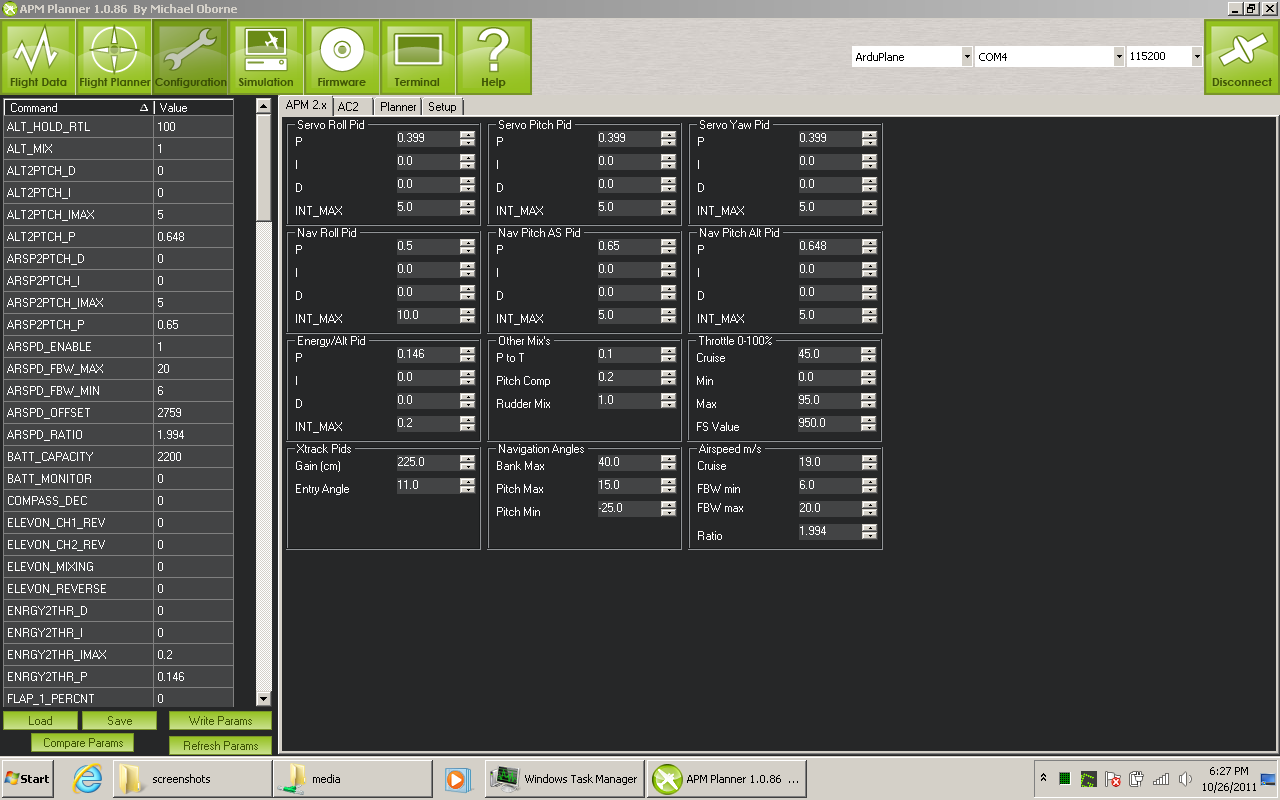 Can anyone explain why the Xtrack entry angle causes the track overshoot after every waypoint, regardless of how low the entry angle is set? Of course the major problem here is that if there is any wind at all this angle needs to be set sufficiently high enough for it to correct for the wind, otherwise the plane is hopelessly lost.

Something seems strange to me...