I am not sure what section this post belongs in, so I am putting it in the Misc section for now.

I have a couple of questions that I will put forth upfront.  If you have any input or are curious you can read on for the details of my flight.

Does the radio throttle fail-safe trigger the usual RTL or is it some different wider radius RTL or tune down the PID values to a default set of values?

Is there anyway to disable the autopilot, such that if the plane is landed the fail-safe will not be triggered by a loss of Tx signal?

So here are the details:

I was flying with a Turnigy 9x Tx with the stock AA battery pack.  My batteries were about 3/4 charged when I started.  I was working on getting my navigation parameters down, flying a basic box pattern.  After the first circuit, my Tx voltage alarm beeped several times and the voltage began jumping around.  Before I could do anything, my Tx restarted.  I thought at that point my batteries were dying, so I decided to switch off the Tx, to trigger the RTL fail-safe while I could think of a solution to get my plane down.

Rather than the typical RTL loops overhead, the plane flew off into the distance.  I though at that point my plane would fly off never to be seen again.  It luckily flew a huge radius circle and returned to view over the trees.  At this point I was rushing to pull my Futaba Tx out to scavenge its battery (of a different connector type naturally).  When I threw down my Tgy radio, it restarted, flashing the switch error message.  When I reset the switches I regained control of the plane in manual mode and brought it around for a hurried landing.  (At this point I thought my batteries were just low, and had recouped some power from sitting.)

After landing, I ran to recover the plane, but before I reached it, it began driving around on the ground (back in RTL fail-safe).  The plane managed to take off, tried to turn and stalled due to its low speed.

After picking up the mess of my plane, I played around with the radio to see what was causing the problem.  It turns out the Tx default battery pack holds the batteries too tightly so that the spring doesn't properly push the batteries into the contacts.  Playing with the battery holder I realized that by jostling the pack the you can cause the batteries to loose contact, or have diminished contact.  This must have been my issue in flight.  Also running to the plane after it touched down must have caused the Tx to go out again.

So, although it saved my plane (and later wrecked it), why did the APM fly my plane in such a huge circle about the launch site.  My RTL had been set to 30m radius, but from the kmz the plane flew a 467m circle, that wasn't centred at home.  After a good chunk of the loop it switched centres to a closer point to home and flew at a reduced radius. 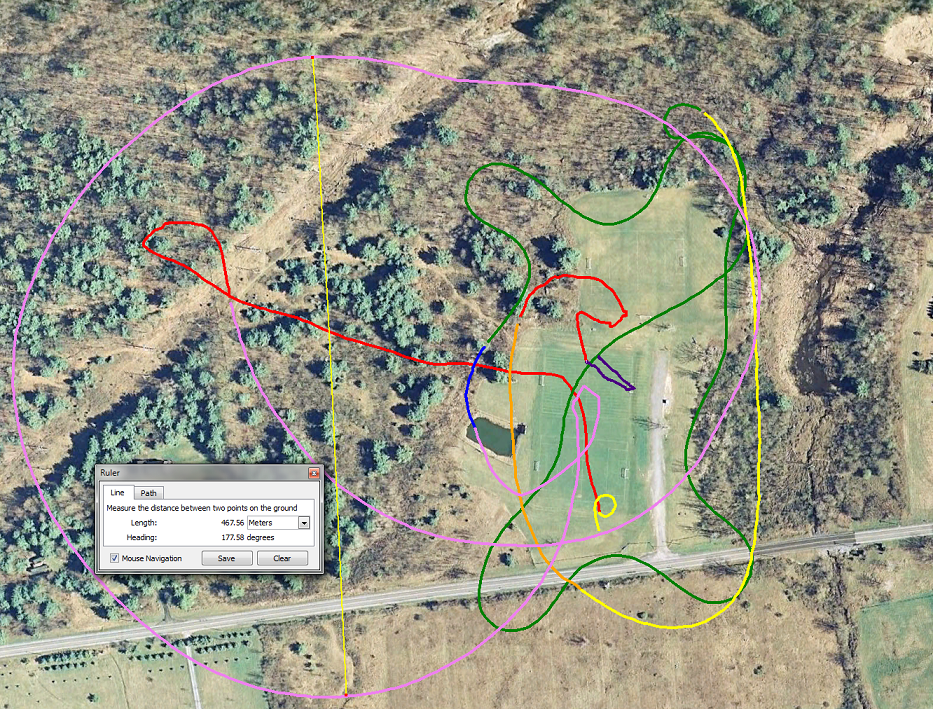 The next question would be, should any similar odd situation occur, once a plane is on the ground is there are safety you can activate to disable the APM?  Can you set a switch to disable the fail-safe?

Thank you for any help you can provide.

RT @DAVGtech: What a great way to connect why @diyrobocars community is so valuable and important! Have to start somewhere @IndyAChallenge…
More…
Loading ...