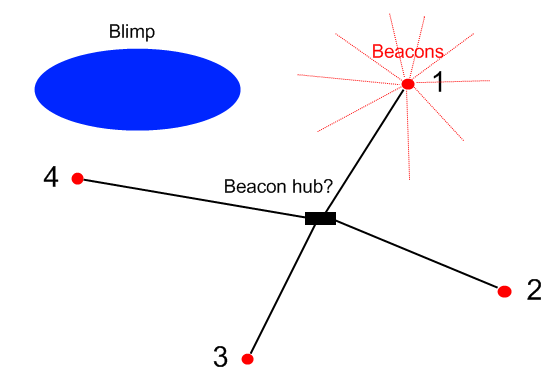 Jordi and I are slightly stuck at the last part of our Blimpduino project. We've got the blimp itself all sorted, from electronics to mechanical assembly, and are ready to move into mass production on that. We intend to ship it with a single ground-based IR beacon, around which it can navigate, and that's done, too. But ultimately, we want it to be able to navigate to multiple beacons, and that's where we've run into a problem. Let me describe the issue, and maybe some of you will have some ideas.

To keep Blimpduino as cheap and simple as possible, it navigates by looking for signals from a ground-based IR beacons in any one of four directions. There are four IR detectors (N,S,E,W) on the blimp and the ground-based beacons are nothing more than an IR LED transmitting random 1s and 0s at 56KHZ. This being IR, they bounce all over the room and there is loads of IR noise from other sources, but the IR receiver that records the highest number of 1s (highest signal-to-noise ratio) is considered the direction that the beacon is transmitting directly from and we steer accordingly. (This is also the way the Pololu IR beacon/transceiver pairs work)

That's easy for one beacon. But when we want to introduce multiple beacons, each with a unique ID, it gets more complicated. We can't transmit at different light frequencies, because we'd need to add matching IR receivers on the blimp for each beacon we added. We can't use TV remote control codes, because then we can't tell where they're coming from (it's the ratio of signal to noise that tells us direction, but the codes are all signal and work as well if they're bouncing off a wall as when they're aimed directly).

Our instinct is to have a central beacon controller (another Arduino--see diagram above) and sequence them so that you'd be able to tell which beacon is transmitting by when in the beacon sequence you got the signal. But that requires us to synchronize the blimp and the beacons to a common clock, and we're debating how to do that.

My proposal is to do the following, 10 times a second:

The beacon hub controller would just schedule that sequence. The blimp, meanwhile, would have to detect both the direction of signals and how long they're on. If they're on for 30ms and then off for 20ms, that's the start of a cycle. Then depending on when in the cycle it detects the next signals, it knows which beacon that is.

Jordi's not convinced this will work, and thinks we'll need an RF link to communicate between blimp and beacons, which strikes me as expensive, complicated and unnecessary. What do you guys think?

Is there a better way to have a blimp distinguish between different IR beacons?