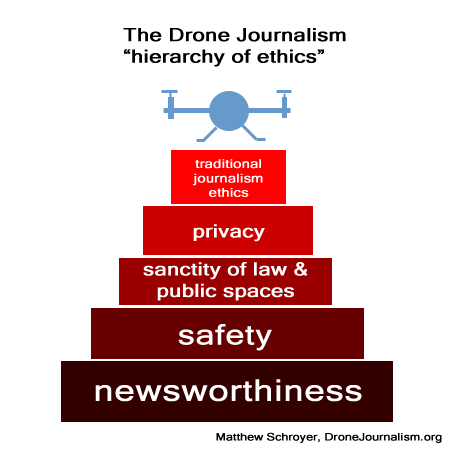 This week, AUVSI (Association for Unmanned Vehicle Systems International), an industry group representing drone manufacturers, developers and operators, unveiled a "code of conduct" for operating UAS. While the code fairly broad and covers concepts of safety, professional conduct, and respect to laws, it also is not terribly specific. This might reflect the diversity of the people AVUSI represents (how specific can you get for 2,100 member organizations and 7,000 individual members?), but I believed it can be improved.

The area of drone ethics -- for journalism -- is even more underdeveloped. I founded DroneJournalism.org in December 2011 with the hopes of starting that conversation, with hopes that the website would become a "wiki of drone journalism and ethics." While we've made some progress in terms of building and operating drones, we haven't come too far in the way of establishing that code. So here's my first crack at a code of journalism ethics, "A Code of Ethics for Drone Journalists."

Also, in my view, it's important not to just throw a list of requirements at a person and expect them to make sense of it. Many codes of conduct or ethics are just that: lists of bullet points that don't really provide direction or help with the application of the rules. I think a better approach borrows from "Maslow's Hierarchy of Needs," which hinges on the idea that to proceed to the next "highest" level of achievement, you first must solve some very basic problems.

So really, what I'm going after is like a check-list for drone journalism ethics. Here are the levels of this "hierarchy of drone journalism," starting from the bottom and working to the top of the pyramid:

1) NEWSWORTHINESS. The investigation must be of sufficient journalistic importance to risk using a potentially harmful aerial vehicle. Do not use a drone if the information can be gathered by other, safer means.

2) SAFETY. A drone operator must first be adequately trained in the operation of his or her equipment. The equipment itself must be in a condition suitable for safe and controlled flight. Additionally, the drone must not be flown in weather conditions that exceed the limits of the drone’s ability to operate safely, and it must be flown in a manner that ensures the safety of the public.

3) SANCTITY OF LAW AND PUBLIC SPACES. A drone operator must abide by the regulations that apply to the airspace where the drone is operated whenever possible. An exception to this is provided in instances where journalists are unfairly blocked from using drones to provide critical information in accordance with their duties as members of the fourth estate. The drone must be operated in a manner which is least disruptive to the general population in a public setting.

4) PRIVACY. The drone must be operated in a fashion that does not needlessly compromise the privacy of non-public figures. If at all possible, record only images of activities in public spaces, and censor or redact images of private individuals in private spaces that occur beyond the scope of the investigation.

5) TRADITIONAL ETHICS. As outlined by professional codes of conduct for journalists.

These are pretty basic guidelines for the time being (not intended to be all-encompassing), but we hope to fill out the gaps with the help of the droning community. Any opinions or comments are welcome.