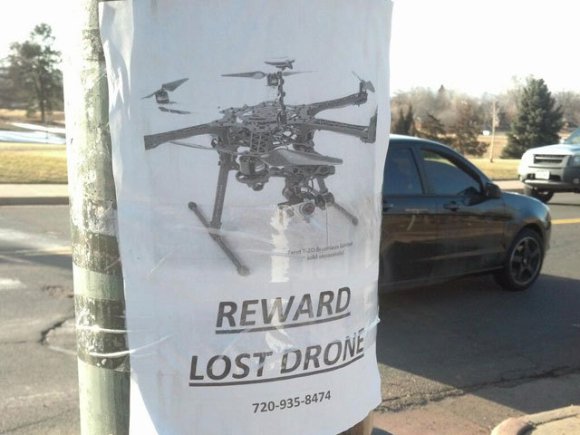 Worth watching the video of the ABC Denver news report of a drone flyaway (it was a Storm Drone 6 with a DJI Naza controller).  A screenshot of DIY Drones makes an appearance ;-) I can't embed the video, but you can watch it here.

Loyal Merrick says his $2,000 Storm Drone 6 with a $400 GoPro camera attached just floated off like a balloon.

He has posted flyers around the Denver metro area.

7NEWS has discovered that drones floating away from their operators are becoming more common with this new technology.

He still has the transmitter, but as for the aircraft itself, it's gone.

"I tried to run in the direction to get closer to it, and I don't know," said Merrick. "I just lost track of it. It's that simple."

Merrick was flying the drone on Friday over the now closed Rosedale Elementary School.

"And then it got a little bit too high," he said.

So, he hit the fail-safe button on the transmitter.

"It's supposed to return to its exact take-off spot," said Merrick. "Just like a boomerang. It didn't do that. It just kept flying off in the same direction."

Merrick invested in his drone for a possible future aerial photography business.

"If you can get a GoPro up in the air at the right place, it just can capture the beauty of Colorado," said Merrick. "I could use it to photograph real estate, especially high-end real estate, weddings, bike races, events. Right now it's just a hobby, but it could be a career."

Even though the FAA has declared you can't fly drones for commercial gain, Congress has mandated the FAA integrate drones into commercial airspace next year.

"I took a big risk, but that's what entrepreneurs do."

As for the liability of the drone flying off, Merrick says even if it crashed it wouldn't do much damage because the carbon fiber is so lightweight, and the drone itself is noisy.

"So it's not going to sneak up on people. It's not going to be hitting people. People are going to see it and get the heck out of the way," Merrick said. "For me, this was just a very expensive first mistake."