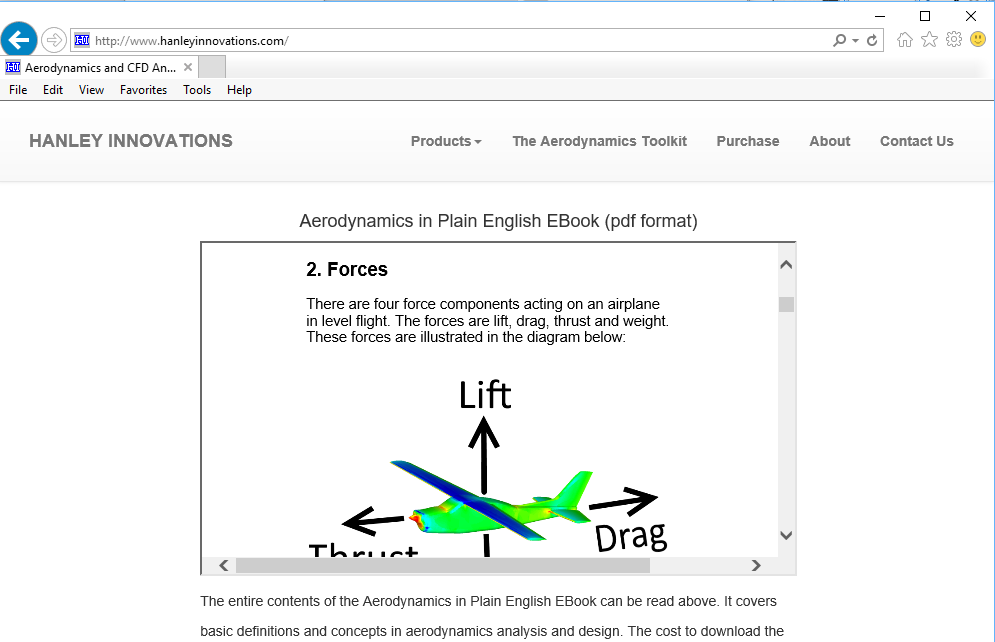 Several year ago, I wrote a booklet entitled Aerodynamics in Plain English.  Last week, I convert it to a PDF EBook.  I embed the entire book on the front page of my website for viewing (please scroll down to the end of the page).  There is also an option to purchase the PDF version if you would like a permanent copy.

My webpage is located at the following url:

The following topics are addressed in Aerodynamics in Plain English:

Forces on an Airplane. Why Does it Fly?Introduction to forces acting on an airplane. Explanation of the role of the lift, drag, weight and thrust forces as related to flight.What is Density?Definition of density; Comparison of air and water densities; The  relations between lift, drag and density.What is Viscosity?Definition of viscosity;  Introduction to the role of viscosity in aerodynamic drag.What is Compressibility?Definition of compressibility; Speed of sound definition; Mach number definition; Prandtl-Glauert rule.What is Pressure?Definition of pressure; the relations between lift and drag and pressure; conservation laws and pressure.Non-Dimensional NumbersSome non-dimensional number in aerodynamics include the lift, drag and moment coefficients in addition to Reynolds number and Mach number.Reynolds NumbersDefinition and importance of Reynolds number. Table with sample calculations of Reynolds number.Lift, Drag and Moment CoefficientsDefinition and calculation of lift, drag and moment coefficients. Importance of consistent units examined in calculations.The WingRole of different shaped wings; Definition of induced drag; Introduction to tapered, sweptback and delta wings.How Does a Wing Generate Lift?The relations between conservation of mass, conservation of momentum, streamlines, Bernoulli equation, pressure and lift are discussed in this section.How Does a Wing Generate Drag?This discussion about the generation of profile drag includes the role of boundary layers, transition points, adverse pressure gradients and laminar flow airfoils.AirfoilsThis glossary of terms define the parts of an airfoil and characterize different types of airfoils.How to Pick Airfoil for Wings

How to use the lift and drag polar plot, the lift and moment versus angle of attack plots to compare airfoils and choose the correct one for your application. Designing and Testing AirfoilsThis section introduces inverse design and airfoil modification concepts for designing airfoils. An overview of experimental and computer testing of airfoils is presented.Considerations for MakersFurther consideration for builders examine the role of airfoil thickness in the design of wings.DefinitionsA glossary of several terms in the field of aerodynamics.ReferencesBooks and software for further exploration of aerodynamics.