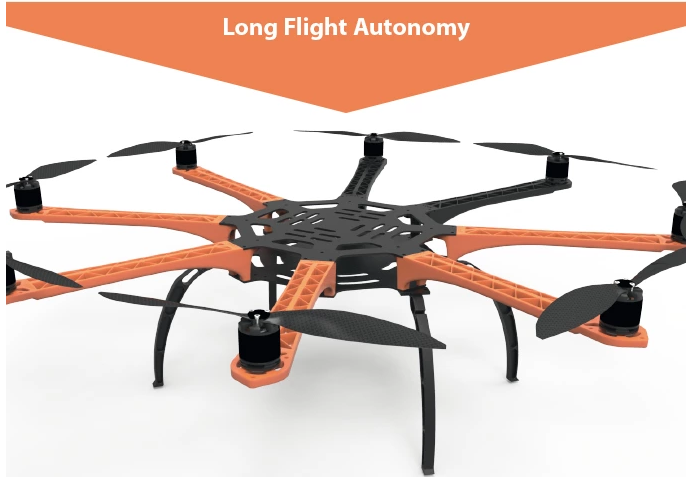 Quadcopter FC4, Hexacopter FC6, Octocopter FC8 and OctoQuad FC4r. No, these are not the names of the Transformers 5 new robots, but the drone models that the new startup from Barcelona, Airk, is able to develop.

The family of drones Fireclouds by Airk is made up of 4 units, each model with quite different uses and purposes.

Quadcopter FC4 (4 arms) is the lightest and smallest model, designed specifically for those who want to get started in the drones’ world. It is also the most affordable one. Great to learn how to fly.

On Hexacopter FC6 (6 arms) you can dock a camera and record one-off images, between 15 and 20 minutes of video. It would be the appropriate drone for advanced amateurs, with the optimum ratio between size and features.

Both models are already in production stage.

Octocopter FC8 is the crown jewel, the biggest and strongest model, with 8 engines distributed in 8 arms, which allows an impressing stability. It is able to hold big wind gusts, and it can self-correct its path. It is the optimal drone for video professionals, as you can dock high range cameras (such as Go Pro or Lumix GH4), and record between 30 and 40 minutes of stabilized images.

Finally, for those uses in which agility is more important than stability, OctoQuad FC4r is a drone with 8 engines as well, but distributed in 4 arms. Its surface is consequently half of Octocopter’s volume. It’s a more “jittery” model, but faster and more agile, which makes it perfect for maintenance duties. It can record between 30 and 35 minutes of video.

For the manufacturing of the four models, Airk always work with optimum components and the most prestigious brands, in order to obtain a high-quality and high-performance product. In addition, the drones are customizable, they allow a great range of uses, and they follow the do it yourself philosophy: they are the only ones in the whole market where 50% of the assembly guidelines (placing of the engines, sense of rotation, arms placing, etc.) are built-in in the same chassis of the drone.

In order to build the first units of the FC8 and the FC4r models, Airk has started a crowdfunding campaign at Kickstarter platform (www.kickstarter.com).

With this system, you can choose the precise amount you can bring to the project, and contributions will only become effective when the project is launched. Also, depending on the size of the contribution, the sponsors will have an up to 20% discount when buying a drone.

You can check more information about the campaign at: https://www.kickstarter.com/projects/davidmatanzas/fireclouds-multicopter-frofessional-drones

Established as a company in October 2015, the Airk project started in fact in summer 2013, with David Matanzas’ final project in Industrial Design Engineering: designing and prototyping a drone that could fly up to 50 minutes with 6 GoPro cameras, and record 360 degrees videos. A project qualified with an A+ that drew much attention in the sector.

After a phase of redesign and adjusting, the support of the business accelerator Yuzz from Sant Cugat City Council, the introduction of a business experienced partner, Miguel Suárez, by the end of 2014, and a first investment of 100,000 € for development, Airk is already a reality.

In its first steps, Airk has already collected several prizes. In December 2014, it was granted with the Yuzz Sant Cugat First Award 2014, thanks to which the founders of the company could travel to Silicon Valley (California) and meet representatives of Stanford University and companies such as Intel, HP or Ericsson to analyze the project. Airk was also selected by ESADE’s Empenta Program –with just another 9 projects–, a program that analyzed business plans’ soundness; they found out it was sound, and if any mistake had been committed, this was to undervalue the size of the project. They were also one of the three finalists of the annual innovation competition organized by the company based in Oviedo TreeLogic, and they were granted with the Best Entrepreneurial Idea award in the contest Café Aventura de Sabadell 2015, with an economic endowment aimed at the company’s R+D.

You can find more information about Airk at:
http://www.airk.eu/