In our RC world, autopilots are typically some kind of software/hardware combination that is physically located on the craft flying/driving/sailing etc.. This has some disadvantages since autopilots are expensive and singular, meaning that they only know them selves and have no interaction capabilities with other autopilots.

As an example, a friend once asked me what it would take to make a drone that could analyse a large field of crops taking samples of soil were the vegetation was less eager to grow. My reply was “Two drones!” - one fixed wing to fly over the field, doing a flir/nir analysis - and one copter type to fly out, land, take samples and return them.

In short - some problems are not solved using one single type of drone, but rather a combination of drones with different capabilities.

In the dungeons of my cellar, pilled with winter clothes, umbrellas, broken china and old lamps, I’ve been working on a universal autopilot system, that has a central computer system that is capable of guiding several drones and coordinate their activities. The main software can be executed on a very small computer ie. a raspberry pi or similar, or a laptop. The drones run a modified version of multiwii 2.2., that sends very compact telemetry data several times each second as well as being able to receive commands from the autopilot on the ground.

The idea is to keep the autopilot on the ground (or on a mother drone), and keep track, issuing flight directions using short and efficient telemetry data between drone and main computer. Several crafts can be controlled by the software at once, making multi drone missions possible and coordinating that drones do not collide.

Each drone uses a XRF (www.ciseco.co.uk) radio module to send back telemetry as well as receive orders on direction, speed, altitude etc… The XRF modules are great, very easy to use and setup and have a range up to 1.8 miles. Most serial transceivers are however usable. Each drone uses a multiwii board for stabilisation and serial communication, and a gps module so the central computer knows were the drones are at all times. 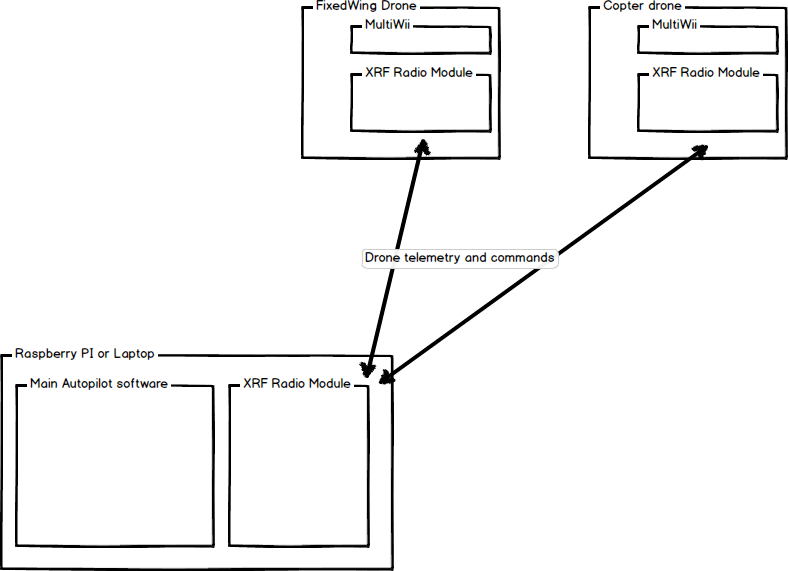 The autopilot software (running on the central computer) is controlled by a state machine, meaning that a system is making sure that everything happens in the correct order. For instance, that auto land is only possible after takeoff. Or that takeoff is not possible if the preflight sequence was unsuccessful or GPS lock has not been achieved. The state machine also makes sure that transitions between states are carried out correctly - ie. going from autopilot to manual flight makes the state machine automatically pause the autopilot function and set the craft on a straight path before control is set to manual.

The system is easy to extend for different craft types as well as different hardware.

The guidance part is based on the USAV project described some decades ago (so it seems) here.

Currently I have a simple system working, with one fixed wing, called the UTV-3, based on the Z84 from Zeta Science. I’ve implemented some simple maneuvers as auto takeoff, auto land and simple waypoint navigation. Simple stuff that I use to test the system with. Once everything is stable, I’ll be implementing the multi drone hub, needed to coordinate the works of several drones. Although I work a lot in my dungeon, I’m also lucky to live close to a field for RC enthusiasts were practical testing can be done. Videos to come.