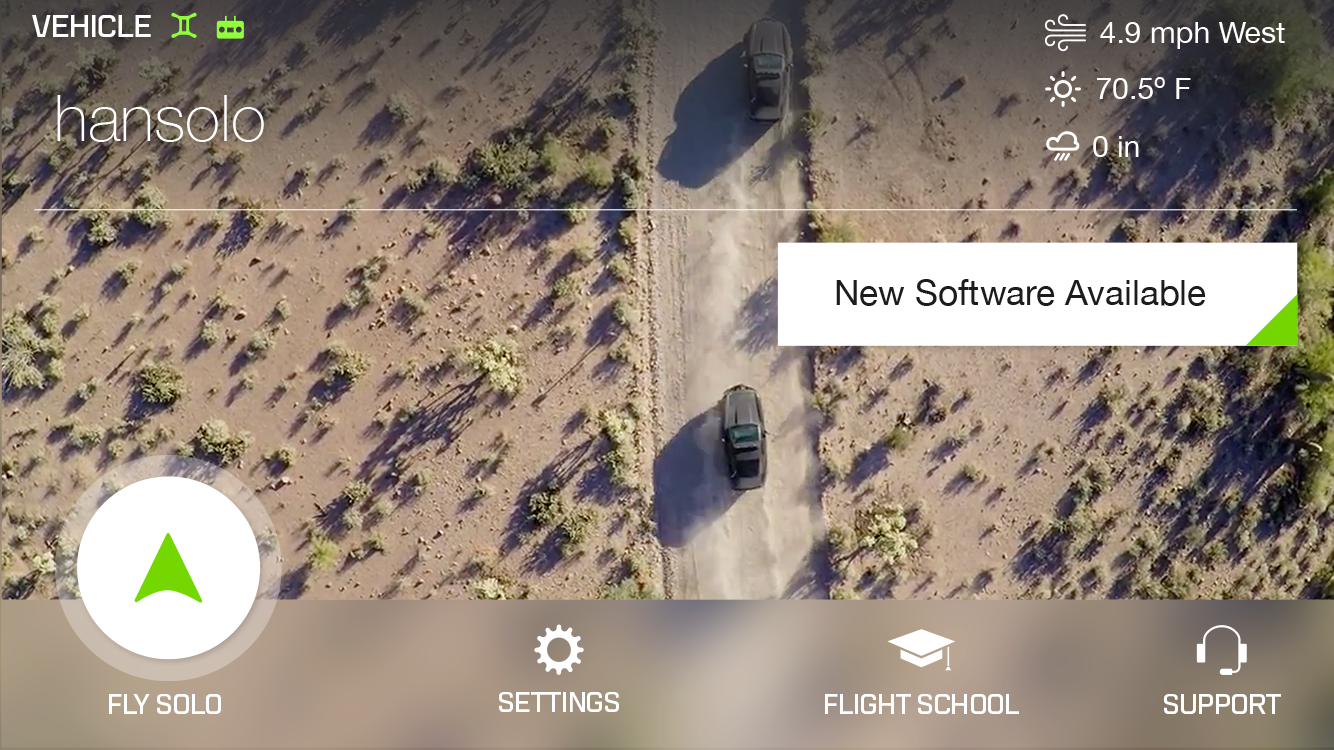 We’re happy to announce the release of the latest and greatest update of the Solo app, for both iOS and Android—release 1.1.0. While this update isn’t necessary for Solo to work, it is necessary for the Solo Gimbal to work. And don’t forget: In order to unlock full access to your GoPro through the gimbal, you’ll need to update your GoPro; instructions on how to do that can be found right in the Solo app. Plus this new release offers some other significant improvements, so we highly recommend you update all components of your Solo system.

The new release is available in the App store today, and will be available on Google Play this weekend. Here’s a quick rundown.

As you’ve likely heard by now, Solo Gimbals are shipping this week! Please note: Your gimbal will not work unless you make this update. Here’s what you’ll get from your gimbal with this update:

By popular request, we’ve now made it possible for you to adjust the altitude that Solo will climb to when it returns home. If you set a high enough altitude, Solo will be more likely to fly over any obstacles (within reason—not the Burj Khalifa or anything) on its way home. We also increased the default return home altitude from 15m to 25m and added a new safety measure—now Solo will always pop up 10m when you hit return home, even if you’re above your specified return home altitude.

We’ve also made some pretty substantial aesthetic and functional updates to the app itself.

We’ve changed some of the low battery alerts with this update, giving you a little more heads-up when you’re running out of juice. In the older versions, the battery alerts you at 25% capacity, then again at 10% and then returns home around 6%. Now it sends alerts at 25% and 15%, returning home at 10% capacity or if the voltage drops below 14 V, whichever happens first. Solo will beep loudly to warn you of a low battery. You also have the option to cancel the return home battery failsafe by pressing the FLY button; however, if you let the battery get to zero, Solo won’t fly and you’ll permanently damage your battery.

Be aware of your location: If Solo’s flying really far from your home point, it won’t be able to Return Home if you’ve only got 10% battery remaining.