I'm delighted to announce the release of the first public beta of ArduPilot Mega 2.0. This is a significant upgrade to APM 1.02, and now delivers on full 2-way in-air communications, including real-time mission planning and autopilot control.

Remember that this is an initial beta release, so there may be bugs and undocumented bits. After the beta-testing period (usually about six weeks) we'll release APM 2.0 final version, and retire APM 1.02.

Just download the Mission Planner and select "Upload Firmware" from the Tools section of the menu. Make sure APM is plugged into your USB port and you've selected the right port from the Mission Planner menu. Click on "Update Check" and the program will search online for the latest version of the code and load it to APM.

If you want to do a simulation with Xplane, follow the instructions below. That will soon be a firmware option with the Mission Planner, too.

[UPDATE: Ignore this section if you don't want to fiddle with the code. Arduino is no longer required to load the code!]

Download the zip file, unzip it to your desktop. You will have two folders inside your APM 2.0 folder, as shown: 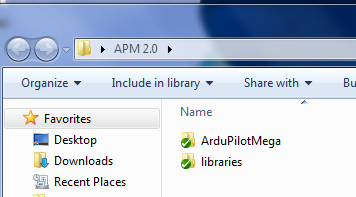 Make sure you're using the latest Arduino (0022). Set your Arduino Sketchbook location to the APM 2.0 folder, as shown below. You must exit Arduino and restart it for this to take effect. Within Arduino, open up the ArduPilotMega.pde file within the ArduPilotMega folder, and that will open all the other files. Before you compile, don't forget to select the right board (Arduino Mega 1280 or Arduino Mega 2560) (Note: in the final version of APM 2.0, you will not have to use the Arduino IDE at all: the Mission Planner will load the firmware for you and check for more recent versions. The Arduino IDE will just be available in case you want to modify or inspect the code. UPDATE: this is now live)

--If you're doing flight simulation with Xplane, instructions for doing it with APM 2.0 are here.

1) Mission Planner won't write waypoints on Port 0 in HIL mode. Instead, write the waypoints via your Xbee (port 3); remember to change the Mission Planner baud rate to 57k when using the Xbee port.
2) Uploading mission commands is still not fully documented. We'll get to that this week
3) There may be some issues with datalogs not recording. We're looking into it.

4) The manual still describes the 1.02 software. We'll change that to 2.0 during the beta test period, so by the time we release the final of 2.0 the manual is fully updated.

5) This has been mostly tested with 900 Mhz Xbee modules and the XstreamBee adapter, which work great. However, there is an issue with the 2.4 Ghz Xbee modules, which have a slightly different hardware configuration that conflicts with that adapter when sending data upstream. A short term workaround is to solder a jumper from the adapter's CTS to V+ pin. The next version of these adapter boards will include a more graceful fix.

If you find any bugs, please file a report in the Issue Tracker. The dev team will not be responding to bug reports filed in blog comments

First Previous of 24 Next
This reply was deleted.