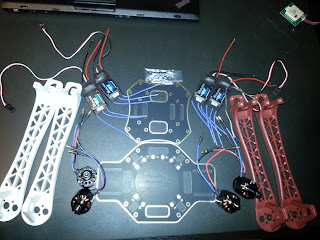 ArduCutter gets airborne after the past week of building fun and a little embarrassment. It is all in the name. I recently read the line, "Multicopters are essentially flying lawnmowers.." from the ArduCopter wiki. This is not an exaggeration as my ArduCutter has cut me, and my grass. Of course I'd rather use something like an ArduMower for my grass as it would do a much better job.
This past Saturday I was 100% ready. I had received the remaining components, put in the time for building and preparing for the maiden flight. In a rush to switch gears from focusing on ArduCutter (at the time it was still ArduCopter) to leaving for dinner, I got a tad cavalier with a quick test. Already calibrated without the props, ESCs set up, all the checks I knew of complete, the craft needed nothing more but to spin up and show me where all my spare time had gone. So on goes the battery and small blips of the throttle, pitch and roll to see the response at low RPM. A bit too much roll and up she came, right toward my face. I was less than a meter away. This was really irresponsible on my part! A sliced open finger and some knee damage has given me the FULL respect these deserve. So I learned a nice little lesson. Too eager and too much of the little kid in me. Result: my only set of props was now incomplete with only three left intact. 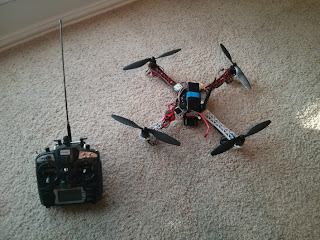 Four days later a cheaper set of 1045 props show up and I'm ready to be an adult about this. So I thought! Today the wind was ~15mph. Clue number one. I went off to investigate the closest location with the least wind. The first task was to get into the air and simply hover, nothing fancy. As
you see in the video this is short lived as the wind makes the fenced in yard too small an area. Off to the field where the wind was about the same but much more space. More space means I can play a bit more because I am a pro already. That's the voice in the back of my head. So a few successful hops dissolve the common sense to proceed with the obvious step of completing small, quick and nearby flights finishing with the auto-trim process. With a little help from my air traffic controller I'm convinced I should flip over to loiter mode, which didn't work out too well. Back to manual a bit too late and orientation is lost. Three more broken props.
Thankfully I have spare parts and hopefully enough sense to wait for fair weather and follow the recommended steps. What a thick skull! But it was so much fun! Next up is trimming, PID adjustments, more practice in general and working through the flight modes. Only after I'm comfortable with these will I slap on the FPV gems.

Lastly, I'm only beginning to gather up tips and tricks, as I am still new to this. However, I must say that I'm not impressed with the Flame Wheel 450 frame. It wasn't machined well, some screws don't fit without a fight and there isn't much space for mounting. Getting the FPV gear on there, stable and looking like the thing isn't a piece of transformer-esque shrapnel will be a real challenge. Looking back I wish I had a size similar to the TBS Discovery. For now, we will make do. I'm off to get some air time, more on the project soon!

From here on out I'll do the cross post from jobforadrone.com however for the last few posts feel free to jump on over to check those out! Thanks!