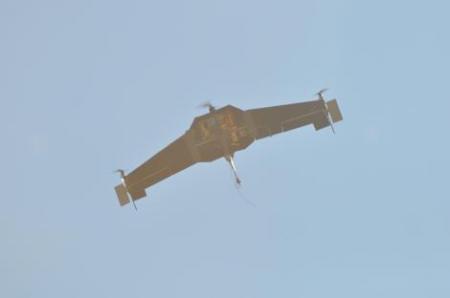 I'm not quite sure that they're right that this is the first autonomous transition from vertical to horizontal flight (there are some others that do that already, including Quadshot, although I suppose they could argue that it's more of a copter than a plane, or maybe not a full UAV?), but impressive all the same.

[Team ATMOS] from Tu Delft University in the Netherlands, has developed a UAV that can autonomously transition from quadcopter flight to that of a fixed-wing aircraft. Although the world has seen several successful examples of transitioning-flight or VTOL aircraft, team [ATMOS] claims to have made the first autonomous transition of this type of craft.

This UAV was featured in their school newspaper, which provides a write-up about the work that went into creating this hybrid UAV. When you’re done with that, be sure to check out the two videos after the break. The first shows the [ATMOS] taking off vertically and flying off as a flying-wing fixed aircraft. The second video shows this and other UAVs in the [DARPA] competition that it was designed for. Fast forward to 2:24 to see this aircraft do a fly-by.