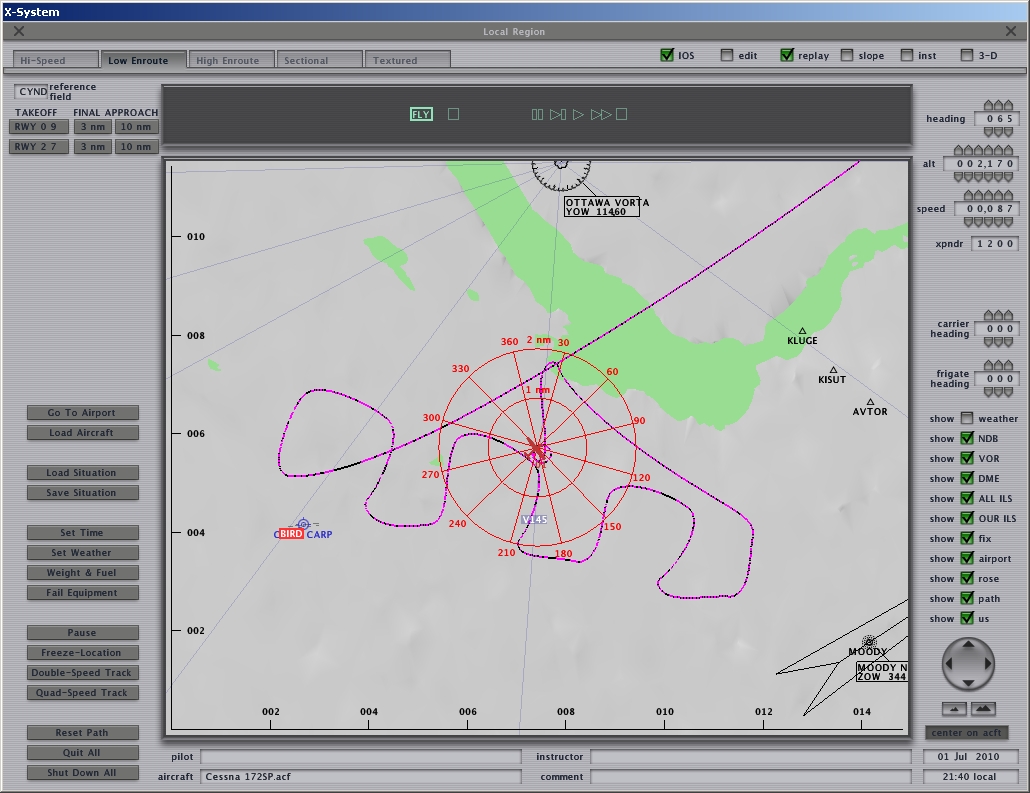 Well I'm back in the basement tinkering after a brief hiatus. After a couple in-air resets of the Ardupilot, I decided that I really wanted to do some simulation before commiting anything into the air again. I think the resets (and crashes) were caused by running out of RAM on the Arduino, but at least now I can give code changes a thorough shakedown before flight.

My workplace does avionics integration for real aircraft, and in most of our labs we use X-Plane and Labview to do simulation testing of aircraft avionics systems. We already have a set of VI's developed that handle all of the UDP communication between Labview and X-Plane.

I borrowed these VIs from work and wrote an interface to take the flight variables and pass them to and from the ArduPilot. I finally got everything working and my ArduPilot spent yesterday evening flying the X-Plane Cessna 172 around Ottawa.

One neat feature (I think) is how I'm getting the servo commands back into X-Plane. I built a 2-servo pitch/roll tray. On the tray I mounted my ArduIMU. The Ardupilot drives the two servos which causes the tray to pitch/roll. The ArduIMU senses this motion and sends its Euler angles back to the Labview computer. The labview computer decodes the ArduIMU pitch and Roll and sends these values over to X-Plane as Joystick positions. A couple of advantages of this method over simply outputting servo commands from the Ardupilot Serial port are:

- I'm testing the whole system (including the PWM signal code and the mux chip).
- I can fly the X-Plane aircraft in manual mode using my transmitter (more realistic, and makes a good way of positioning the aircraft for testing.)
- It's cool to see this little robot arm shift around while the aircraft flies along the flight plan.

I'll post a little video clip of the system in action later tonight.

Here are the details of my closed-loop path.

1. The computer running X-plane sends the aircraft position data (lat/long/alt/pitch/roll/heading) over the LAN to the Labview PC.
2. The Labview PC takes the X-Plane data, formats per the ArduIMU binary message protocol and sends it out the Serial port to the ArduPilot.
3. Ardupilot is set to GPS Protocol 3 (IMU) and listens to the serial data from labview thinking it's from an ArduIMU and does it's autopilot work.
4. The Channel 1 and 2 servo output from ArduPilot is connected to the little tilt table I built.
5. On the tilt table, the ArduIMU outputs Euler Angle Data (Pitch/Roll). I'm using a Sparkfun XBee USB explorer (without the XBEE) to translate the serial output from the ArduIMU back into USB format.
6. Labview reads the Pitch/Roll Data in, formats this data as a joystick position, and sends it to X-Plane.
7. Go back to step 1.

As you can see in the pictures, I am also powering the ArduPilot and ArduIMU from the computer's USB ports. This seems to work well, and I don't have to keep an eye on the voltage of a lipo pack during testing.

I can share the labview VI's I personally created for this little project. (Basically they create the simulated ArduIMU output, and read the ArduPilot and ArduIMU telemetry), however, the VIs that do the communication with X-Plane, while not complicated are not something I can give away (I like my job too much ;) )

The picture at the top of this post is the Local Map screenshot from X-Plane after completing a flightplan consisting of 15 waypoints.

Below are a couple pictures of my setup. 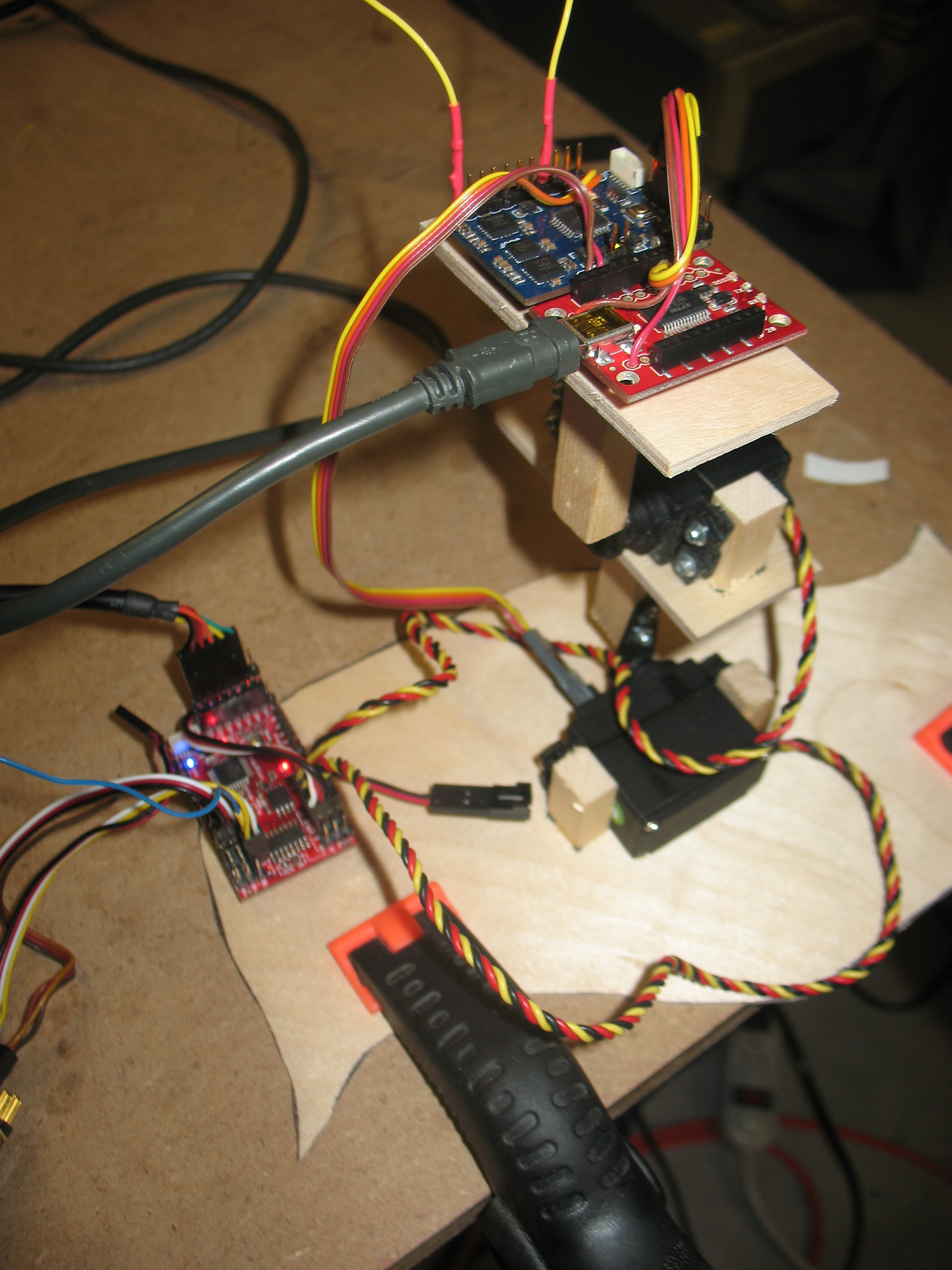 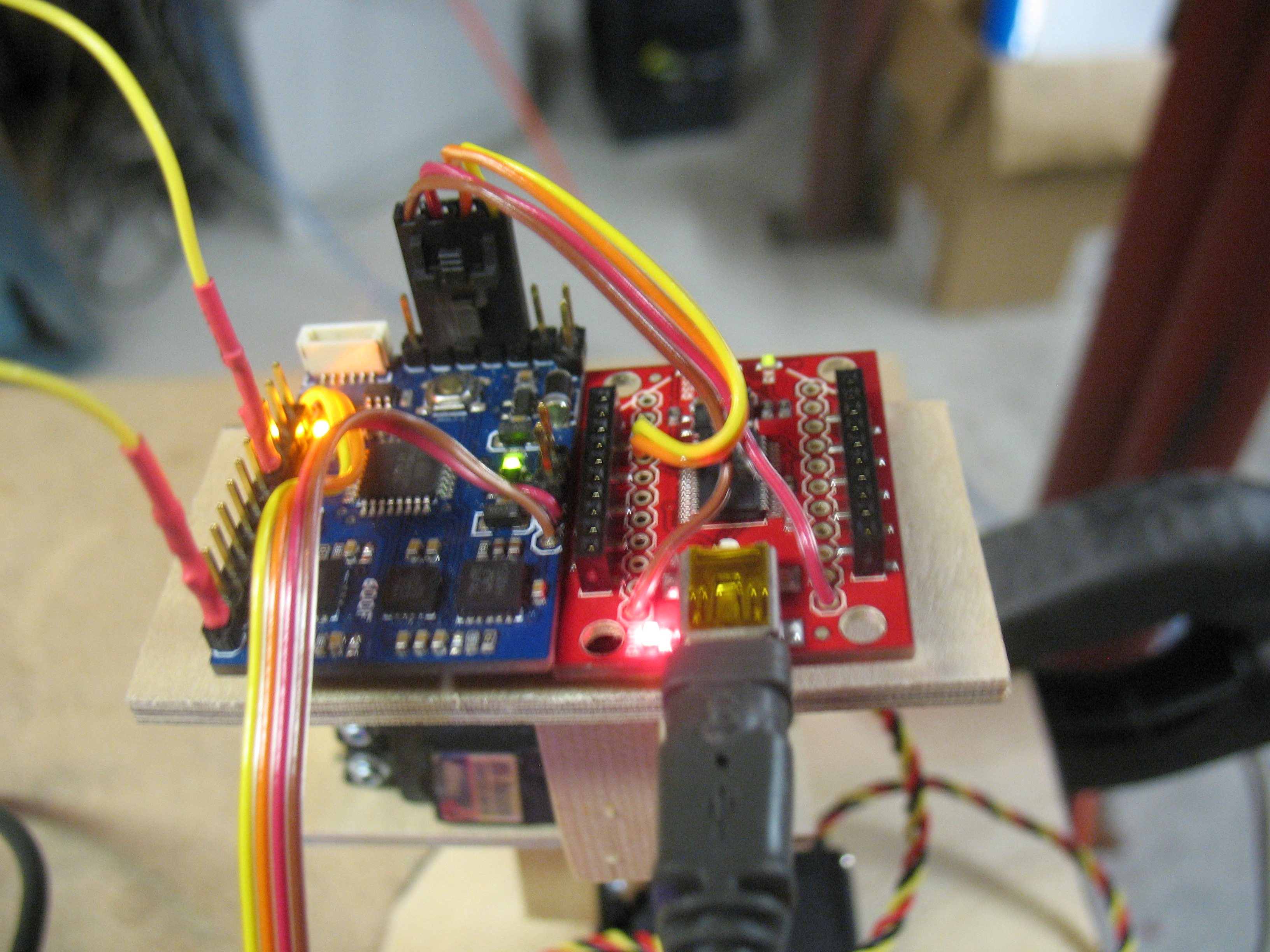 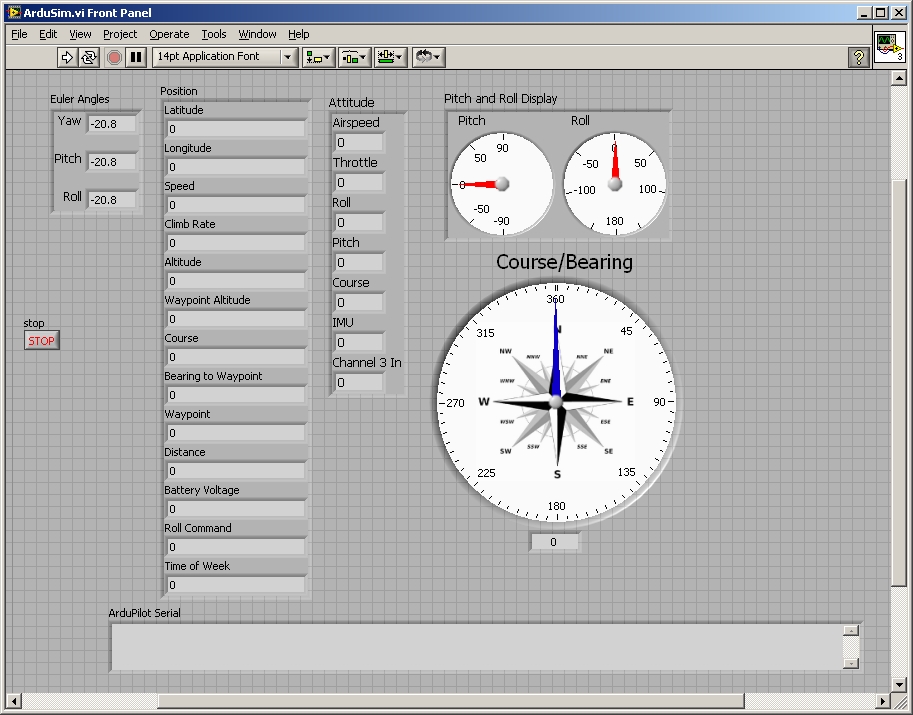