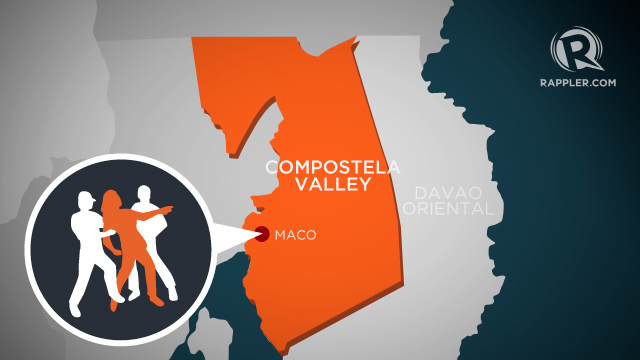 From The Rappler, a Phillipines news source. [UPDATE: Matthew Cua, one of the team members, reports in the comments that the team has been released and is now safe:

This report is true, and I am the team leader who's team got captured, I was off site when it happened

Anyway, we are safe and in good spirits. No one was injured except our drones :( ....

We were there to take photos of newly planted trees by the Department of Environment and Natural Resources of the Philippines. When we explained what we are doing, and showed them what we took , they released us.

If the US weren't using drones for war , us researchers won't be placed in the line of fire :( . But we cleared things out and with coordination with everyone we will continue to fly to monitor the newly planted trees for the reformation of forests in the Philippines .

Right now our guys are resting and will be continuing our environmental work in the other parts of the Philippines.]

From the press report:

DAVAO CITY, Philippines – For violating revolutionary policies against surveillance, 4 private contractors and their driver were seized by New People’s Army (NPA) guerrillas in Compostela Valley on Friday, May 30, a communist leader said.

The captives, identified as Ken Wong, Chrisandro Favela, Tim Sabino, Nico Lasaca, and driver Jonas Loredo, were nabbed in Barangay New Leyte, Maco, at around 2 in the afternoon while allegedly operating drones in the area.

“In culpable violation of the policy of the People’s Democratic Government for bringing in of surveillance gadgets, for undertaking reconnaissance of base guerrillas of the New People’s Army and, thus, abetting the enemy’s counter-revolutionary campaign against the revolutionary forces and environmental plunder, the NPA ComVal Davao Gulf Subregional Command detained 4 personnel belonging to the Sky Eye UAV services,” Ibarra added.

Ibarra said confiscated from the captives were surveillance equipment including one sky surfer drone, two multi-rotor drones, two laptops, and one GPS.

The NPA said the “anti-logging aerial reconnaissance” is just a ploy to intensify the operations of large-scale and foreign mining corporations and to step up intelligence operations against the revolutionary movement in Mindanao.

“The motives of Sky Eye’s reconnaissance are suspicious, considering that Maco is not a hotspot for logging as its forests are largely denuded and its mountains mainly mineral-rich. It would appear that Sky Eye is mainly protecting, if not linked towards the big mining operations in Maco and mountain boundaries of Pantukan and Mabini, areas under the control of foreign large scale mining concessionaires Apex Mining and St Augustine Mining Corp,” Ibarra said.

Ibarra said the NPA has a strict policy against the use of drones as this may be used both for surveillance and attacks.

“The UAVs are not only surveillance gadgets but are also weapons for aerial attacks and strikes, designed and used by US imperialism. Most well-known among drones is the Predator and the Reaper, which have carried out assassinations and massacres in the Middle East, Asia and North Africa. Thousands of civilians have been killed by these drone air strikes.,” Ibarra said.

Ibarra shared that this is not the first time that drones flew in the skies of Mindanao.

“In May 2008, 4 US soldiers manned a tactical command post of the 1003rd Brigade of the AFP in Barangay Ngan, Compostela, Compostela Valley, as the AFP launched a 10th ID-wide military operation. The US troops were spotted operating a UAV. Similar-looking gadgets were found in Paquibato and Marilog districts in Davao City last year,” Ibarra accused.

Despite the alleged violations of the contractors, Ibarra said the NPA will release them but with a condition.

“The NPA will release the captive drone personnel on condition that the Sky Eye will stop its surveillance and intelligence activities in the areas of People’s Democratic Government. The NPA, likewise, urges civilian entities to desist from pursuing defense of large-scale mining and environmental plunder, and to cease performing counter-revolutionary intelligence activities against the revolutionary movement,” Ibarra said.