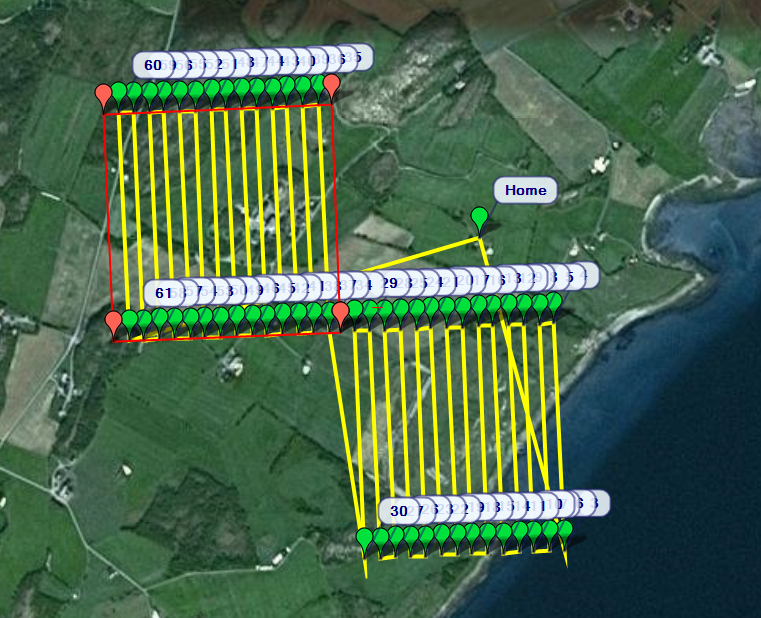 Some years ago I started making a map for the Mindland island in the archipelago of Norway using a GPS, OpenStreetMap and Bing aerial imagery. The main driver for this project was to document old place names. With the drones becoming somewhat of a hobby last year I thought it would be nice to also establish a proper open license ortophoto for the island. Mission planner has what it takes to approach such a task in a structured manner, save for one thing. The polygon tool only imports .poly-files.

When working with maps some of us tend to stick with shapefiles or geodatabases. I have made a small script which allows for the conversion of a shapefile with a geographic coordinate system (wgs84) to as many .poly files as there are objects in the shapefile. Adding the functionality to Mission Planner has been indicated as possible, but has yet to materialise. So until then the python-script associated with this posting remains relevant.

The initial map shows how two .poly files from my generated grid (also called fishnet in the GIS term) can be used to do generate one mission. One could in also add more squares.

The below map shows the grids in shapefile format using a GIS program. Converting all these grids to .poly files posed a challenge. The script has solved it. Using the pyshp-library to enable Mission Planner to read shapefiles should be rather straightforward. In an earlier discussion open formats was mentioned. It is a good idea, but all the time shapefiles area a de-facto standard for conservation work and more it represents a good start.