Had a pretty traumatic experience today while I was trying to get an APM 2.0 working on an RTF "trainer," when I turned off the transmitter and the ESC burst into flames. I was hoping the community might be able to point me in the direction of a solution.

I was ground-testing an electric RC (a Hobbico NexStar electric) with an APM 2.0. The APM was completely stock, and had been loaded with firmware from the Mission Planner without any modification. Controls were calibrated on the Mission Planner as instructed in the wiki, with CH5 on the transmitter dedicated to switching between manual and "stabilize." This was using a Futaba 6ch controller.

The jumper was connected on JP1, in the stock configuration on the APM 2.0. I was supplying power to the output rail via 4.8v NiCd power source, which I checked beforehand actually was supplying about 5V. A standard feature of this trainer-style airplane, an external on/off switch was between the power source and the output rail. The 50A ESC used in the RC airplane did not have a BEC. A previous test without APM 2.0 proved the servos, ESC, motor, RX and TX were all working as designed.

With the APM installed in the airframe and connectors attached as per the wiki, I turned on the transmitter and then the power source to the APM. In manual mode, all controls responded to inputs as was expected. I switched CH5 to "stabilize," and servos and control surfaces responded to yaw, pitch and roll, albeit in the reverse, and potentially with not enough input (I chalked this up to a calibration issue I hoped to resolve after shutting everything down).

I switched CH5 on the transmitter (CH8 on the APM 2.0 input rail) back to "manual," and then turned off the transmitter. The motor turned quickly as if responding to input, then stopped, and smoke rolled out of the electronics bay, followed promptly by a fire coming from the ESC. This fire got approximately 6 inches tall from the ESC and began to burn away the aircraft's external coating and lighted the wood frame of the fuselage. I yelled to my wife to run and get the fire extinguisher, which she ripped off the wall and passed to me, and I applied the extinguisher directly to the electronics bay. This put out the flame and saved the house, and I carried out the airplane to the back yard for safety. By this time, there was no more smoke.

An inspection after the fire showed that a section of external coating was burned, as was some of the balsa frame. Several wires leading to the ESC (two motor wires and battery positive wire) were melted right through. Although the LiPo batteries were mounted next to where the fire took place, they appeared at least on visual inspection to be unharmed by the fire. APM and receiver seemed unharmed from a visual inspection, but I'm not certain at this time whether the chemical flame retardant from the extinguisher has altered the function of those electronics.

At this point, I'm real hesitant to test this particular APM 2.0 on a new ESC to investigate the problem, and I'm really concerned about this as a safety issue. Does anyone know of a condition whereby the autopilot would supply max current to the ESC if the connection between TX and RX is severed? Thank you. Left side of aircraft, showing damage to external coating. 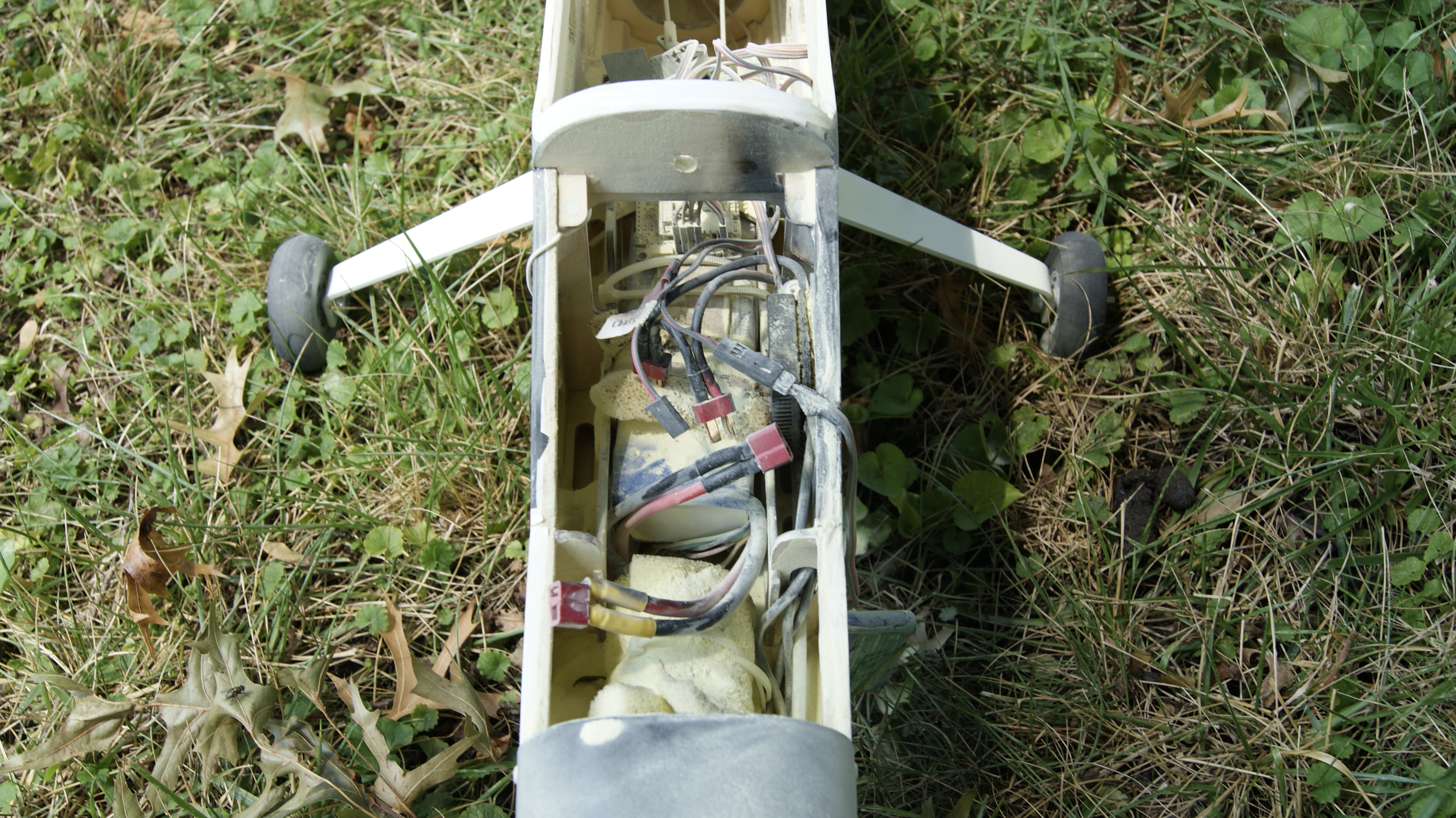 Electronics bay shortly after the event. In front are dual LiPo batteries, wrapped in protective foam. The 4.8v RX/APM power source can be seen hanging over the edge of the aircraft on the right of the photo. Yellow residue is flame supressant. 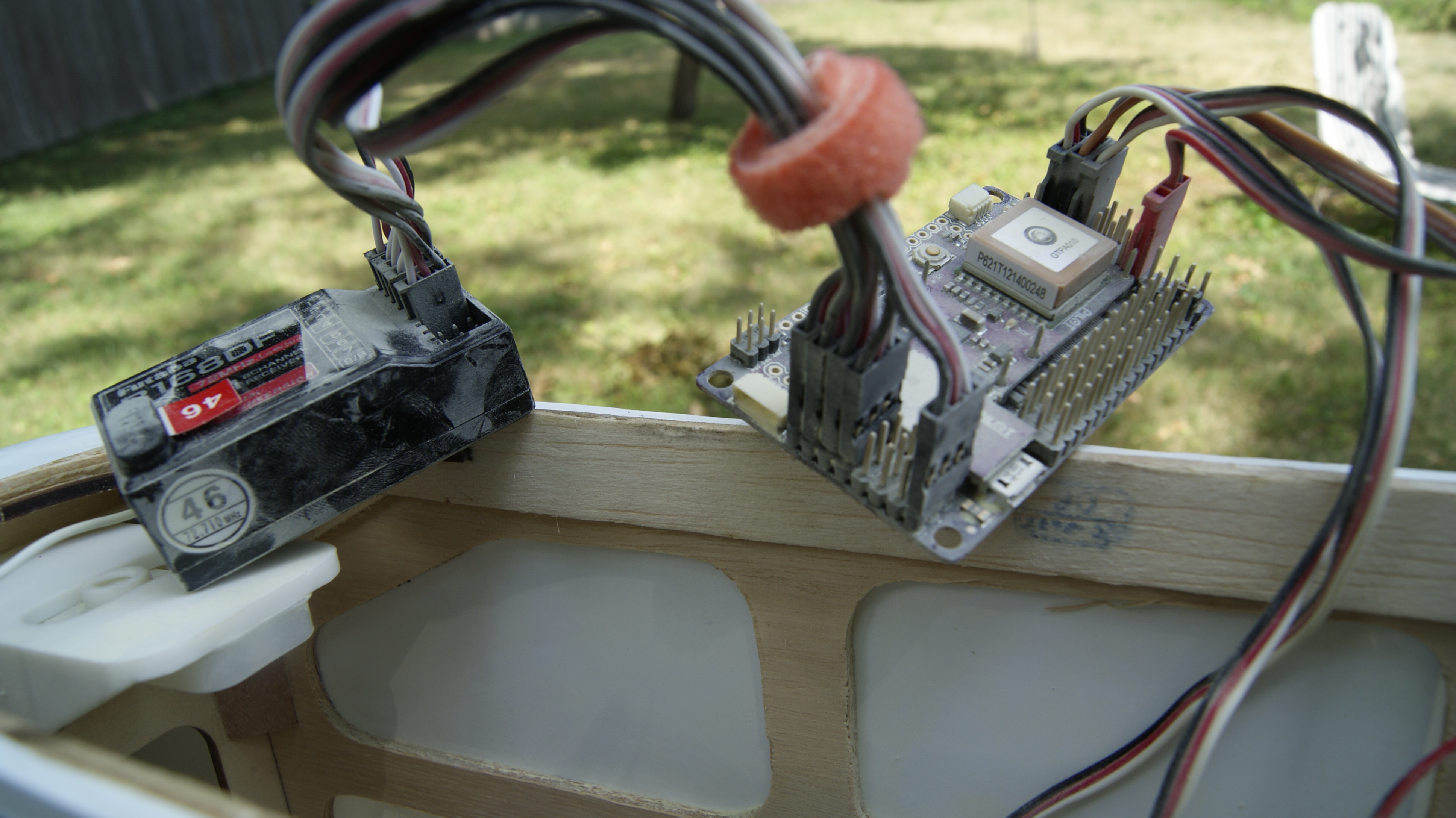 A shot of the APM and RX upon extraction. Both were coated in a thick layer of frame suppressing powder, until some of it was vacuumed off.