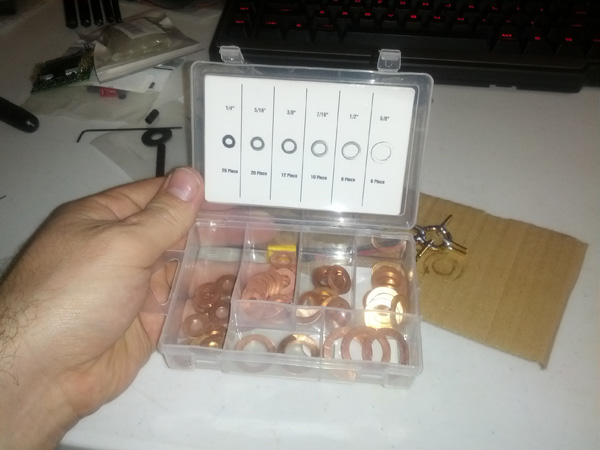 There are various power distribution boards out there but none really were able to accomplish what I wanted for a previous hexacopter build (six battery inputs, six ESC outputs, and a small power lead for the receiver). I'm in the process of building a new small quadcopter so I figured I document the power distribution this time around. This example is less complex than the first one I made for the hexacopter but it illustrates the same process.

The basic idea is to use copper washers to conduct the power and insulate them with rubber washers. This technique can be used with multiple inputs, multiple outputs, wired leads or only the connectors, made with readily available parts at the hardware store for a few dollars, and is scalable from very small to very large multirotors (or any other project that needs high current power distribution).

This pack of copper washers came from Harbor Freight and has enough washers for dozens of multirotors. If I remember correctly it was something like $6. Individual copper washers can be purchased from hardware stores or automotive stores (used for oil drain plug gaskets). 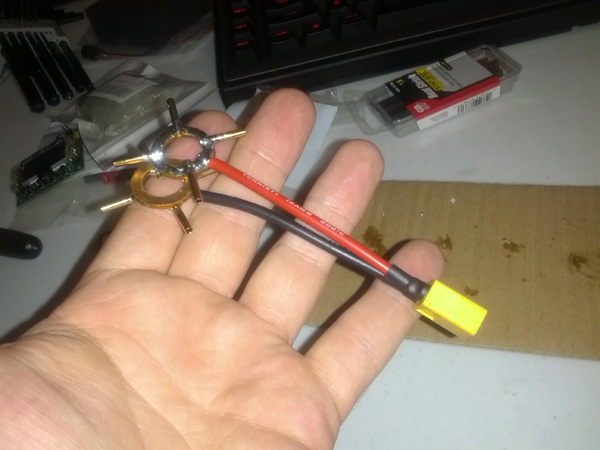 Everything soldered together and ready to be assembled with the rubber washers. I used a 50 watt soldering iron on this one but had to use a 200 watt soldering gun on a larger version for a hexacopter. These rubber washers might be a little big but I wanted to be sure no metal was exposed on the outside. They came from Home Depot and were less than a dollar. The rubber washers come in many sizes to suit whatever size copper washers are used. This is another view from the side to show how they sit together. One is positive and one is negative. To hold everything together I used some small zip ties to make a power distribution sandwich. Rubber, copper, rubber, cooper, rubber. The layer closest to the camera is positive indicated by the red wire. Once in the frame it can be held down with another zip tie or just by the wires themselves.

Hopefully this will help someone out who either doesn't want to wait for a power distribution board to be shipped or who needs something in a configuration that isn't otherwise available. To be on the safe side check it for continuity with a multimeter before plugging in a battery!