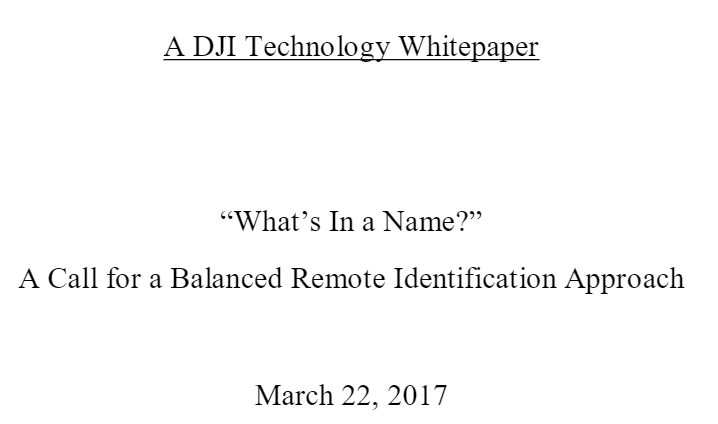 March 27, 2017 – DJI, the world’s leading maker of unmanned aircraft systems (UAS), Monday proposed an electronic identification framework for UAS that would allow authorities in the United States to identify drone owners when necessary while also respecting their privacy.

“DJI understands that accountability is a key part of responsible drone use, and we have outlined a proposal that balances the privacy of drone operators with the legitimate concerns authorities have about some drone operations,” said Brendan Schulman, DJI Vice President of Policy and Legal Affairs. “This is another example of how the UAS industry is innovating solutions to emerging concerns, and we look forward to working with other stakeholders on how to implement the best possible system.”

Last year, the United States Congress directed the U.S. Federal Aviation Administration (FAA) to develop approaches to remotely identifying the operators and owners of unmanned aircraft, and set deadlines for doing so over the next two years. DJI has outlined a concept in which each drone would transmit its location as well as a registration number or similar identification code, using inexpensive radio equipment that is already on board many drones today and that could be adopted by all manufacturers.

Anyone with the proper receiver could obtain those transmissions from the drone, but only law enforcement officials or aviation regulators would be able to use that registration number to identify the registered owner. This system would be similar to automotive license plates, which allow anyone to identify a nearby vehicle they believe is operating improperly, but which can only be traced to their owner and operator by authorities.

“The best solution is usually the simplest,” DJI wrote in a white paper on the topic, which can be downloaded at this link. “The focus of the primary method for remote identification should be on a way for anyone concerned about a drone flight in close proximity to report an identifier number to the authorities, who would then have the tools to investigate the complaint without infringing on operator privacy.”

Last week DJI submitted the white paper to the Association for Unmanned Vehicle Systems International (AUVSI), which is collecting perspectives on how to remotely identify small drones in the United States in advance of an FAA effort to develop a consensus approach. DJI believes a remote transmission system is preferable to a network that attempts to track or record the location of all drones in real time, which would be far more complex to develop and would expose the confidential information of drone users.

The DJI white paper notes several examples of professional and personal operation of drones in which the operator has a legitimate need to keep their identity and the nature of the operation confidential, such as an energy company using drones to survey the location of a prospective new wind farm.

DJI’s proposed system for the United States would also protect the privacy of safe and responsible drone pilots, and would prevent professional drone operators from having to share proprietary information about the location and nature of their flights. Given that some drones have been targeted by gunfire and some drone pilots have been threatened with assault despite flying legally, DJI believes it is prudent to allow individual drone owners to avoid disclosing their identities to the general public.

“No other technology is subject to mandatory industry-wide tracking and recording of its use, and we strongly urge against making UAS the first such technology. The case for such an Orwellian model has not been made,” the white paper says. “A networked system provides more information than needed, to people who don’t require it, and exposes confidential business information in the process.”

The overwhelming majority of personal and professional drone pilots operate safely and responsibly. However, DJI recognizes that law enforcement and aviation regulators need to be able to identify the owners of drones that may be operating unlawfully or in highly sensitive areas. Many people who are unfamiliar with the benefits of drones will also appreciate knowing that authorities can identify their operators when necessary.