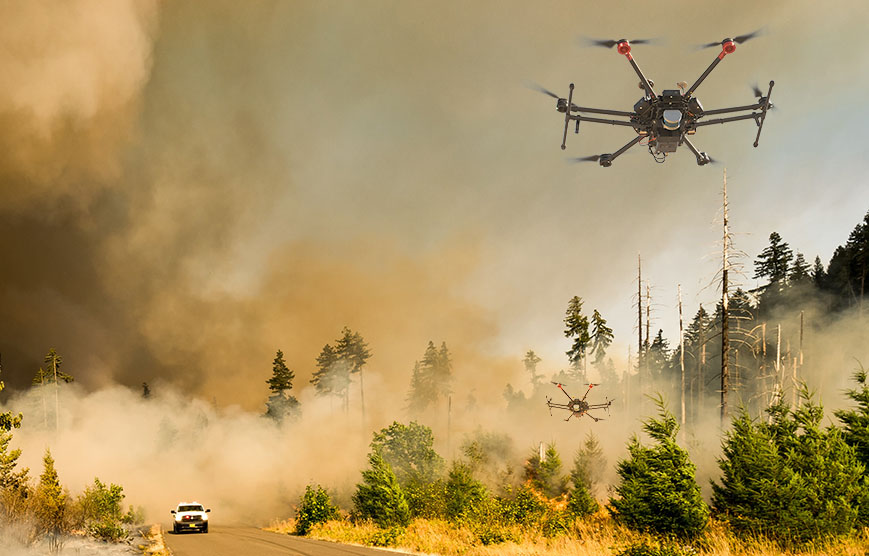 The ongoing pandemic (COVID-19) has taught us many things. Among those lessons is the realization that drones can be used for operations to save people’s lives.

Even before the pandemic, at AirWorks 2019, DJI announced that drones saved the lives of 279 people around the world. The number probably represents a small fraction of documented cases where drones were used as a means for public safety. For example, during the lockdown that followed after the onset of COVID-19, drones helped Indian authorities to contain the spread of the virus by monitoring the streets for unlawful gathering. Read the full case study.

We have just scratched the surface when it comes to commercial drone usage - drones have tremendous potential in disaster management alone.

In a report from the United Nations, it has been stated that 1.2 million lives were lost, 1.7 trillion dollars of damage was done and 2.9 billion people were affected due to global disasters that occurred between 2002 and 2012. With economic and human losses of this magnitude, every new technology that promises to save lives has a huge potential, including drone technology.

What Problems do Drones Solve During a Disaster Response?

There are several pre-existing protocols that are supposed to be followed during disaster response. Most of them have been successful so far, but they create their own set of challenges. The main one is the response time, which is of great importance during disaster management. The second one is logistical support.

For example, in 2015, an earthquake of magnitude 7.8 devastated the Kathmandu region of Nepal, which claimed the lives of 9000 people. All means of transportation were destroyed which drastically affected the disaster response and relief work. Many people, trapped under the rubble, lost their lives since help didn’t reach them on time.

When the Nepali government appealed for assistance to the international community, help arrived in the form of medical support, food, and relief equipment. Several international agencies came and deployed drones to help better assess the situation and to aid the search and rescue process.

Drones were also used during the 2013 typhoon Haiyan in the Philippines. They were mainly deployed to survey the impact of the storm on farmlands and ascertain future risks from similar storms.

Drones help improve the response time, since they can be deployed much faster, as compared to traditional vehicles like a helicopter. Vertical Takeoff and Landing (VTOL) drones can cover large distances and assess the situation in an event where all transportation routes have been destroyed or made inaccessible.

The process of disaster management can be broken down into the following stages:

Using drones for disaster response can add value to all of the above-mentioned stages according to a study from Zurich North America. The study highlights the correlation between a short response during the early phase of disaster recovery with increased success in search and rescue operations.

To better appreciate the benefits of using drones, consider the following:

Drones are a versatile tool, to be used in various ways, as a critical aid in disaster response.

Drones are not just a piece of hardware; they are usually paired with intelligent software to make them truly effective. In a disaster situation of a large magnitude, having multiple drones can be advantageous, but managing a swarm of drones is not easy. FlytNow, with its cloud-based software solution, solves the problem of simultaneously controlling and managing a large number of drones.

In brief, FlytNow works as a cloud application that provides a unified dashboard to manage drones connected to the system. When a request comes for deploying a drone, an emergency response operator can use the advanced mission planner to create a flight path for the drone and initiate the launch. Once in the air, the drone flies with full autonomy as per the mission plan. Below is an illustration of how a drone public safety operation might operate:

FlytNow is available in two versions, FlytNow Business and Enterprise; the latter offers a host of customization options.

This is a standard offering that provides usability out of the box. The offering comes with features specifically designed for disaster response and public safety operations. Here are some of those features and how they benefit disaster relief operations:

The Enterprise version includes FlytNow Business as well as customization and add-ons, for operations that need scalability and a high degree of automation. This edition includes an operating system, which is installed on a single-board computer (SBC) - the SBC is then attached to the flight controller of a drone. This configuration allows for add-ons and integration, some of them are as follows:

Support for third-party integrations: The FlytNow application supports integration with third-party applications. During a disaster scenario, it is important to accurately log the drone flights and to make sure the drones don’t interfere with other aircraft. There are service providers like DronelogBook for flight data recording and Airdata for airspace intelligence, which can be integrated with FlytNow easily.

Advanced geofence: For the safety of the drones and compliance with airspace norms, it is necessary to restrict the area of operation during any relief work. FlytNow supports polygon geofences for operators to work on complex geography.

Integration with ground-based hardware: FlytNow has native support for ground-based hardware like charging pads and Drone-in-a-Box systems. By using such hardware, a first-responder system can be set up where the launch and docking of a drone are fully automated. When disaster strikes, such systems can be activated for faster response and expedite the overall relief process.

Some Instances of FlytNow in Use

During the recent lockdown for COVID-19, India's first drone command center was established in Ahmedabad, by Dronelab, using FlytNow, which allowed local drone pilots to launch coordinated operations to monitor the streets for unlawful gathering.

One of our partners in Belgium, DR ONE, is using FlytNow for airport asset monitoring.

History was created in the city of Lillestrøm, Norway, when Droneverkstedet, one of our partners, conducted the very first remote drone construction site inspection using FlytNow over a 5G network.

In this blog, we discussed the usability of drones in disaster response and the problems they help solve. Then we reviewed the benefits of using drones for use cases in disaster situations. Finally, we ended on the note of how the FlytNow drone fleet management system enables disaster management teams to quickly deploy and manage drones for disaster relief.

Leverage the power of FlytNow to conduct remote public safety operations with capabilities of automation and AI. To experience FlytNow, sign up for our free trial for 28 days using this link: https://flytnow.com/pricing/

If you are interested in partnering with us, please visit https://flytnow.com/partner/.