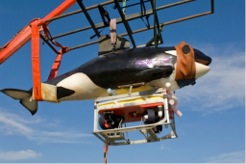 Willy the Whale is actually driven by a underwater Falcon remotely-operated-vehicle (ROV) in the fourth remake of the film, says Saab. (There have been four Free Willy movies????)

The biggest challenge, according to Marine Solutions director, Kevin Bey-Leveld, was to make the Orca whale, with its large body, look like it really was swimming along.

The success of the project, says Kevin Bey-Leveld, helped keep down the cost of filming.

“The way the Falcon flies, combined with trained ROV pilots, allowed the director to film the sequences in a relatively short space of time, in terms of normal filming,” he explains.

Although small and compact, the Falcon was powerful enough to manoeuvre in both swimming pool and the open ocean − the trick, explained Kevin Bey-Leveld, was to balance the buoyancy to compensate between sea water and fresh water. 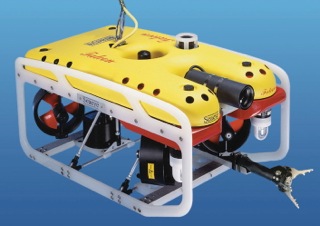 It is not the first time the Falcon has starred in the movies. In the Bollywood film, ‘LUCK’, also filmed in South Africa, it was strapped under a 4.2 metre long latex and polyurethane replica of a tiger shark and used to replicate the realistic swimming motion of the shark and its violent attacks on hapless swimmers.

The Falcon is owned and operated by Cape Town based Marine Solutions. The ROV’s worldwide success across a range of industries, has come from its power to hold steady in strong cross currents, and its distributed intelligence control system that allows up to 128 devices to be connected together on a single RS 485 serial network. This means different equipment can be easily added and changed as needed.