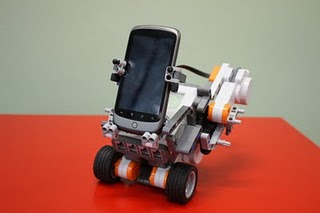 The Google Code team reports some good news. (I love that there's a "20% Robotics Task Force" at Google, which refers to the 20% of their time that they're allowed to spend on cool projects that they love):

"Today we announced a fun 20% robotics project that resulted in three ways you can play with your iRobot Create®, LEGO® MINDSTORMS®, or VEX Pro® through the cloud. We did this by enhancing App Inventor for Android, contributing to the open source Cellbots Java app, and beefing up the Cellbots Python libraries. Together these apps provide new connectivity between robots, Android, the cloud, and your browser.

You can start empowering your Android phone with robot mobility by picking the solution below that matches your skill level and programming style:

We hope this gives developers, hobbyists, and students a head start in connecting the next generation of cloud apps to the world of robotics. Be sure to push your mobile phone’s processor to its limits and share the results with the Cellbots Google Group. Try using Willow Garage’s OpenCV for Android or the new Gingerbread APIs for gyroscopes, enhanced OpenGL graphics, and multiple cameras!"