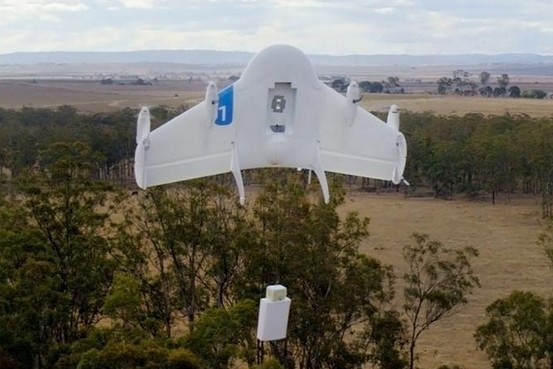 Not a surprise for anyone who has tried dealing with VTOL sporks drones, which are easy to take off but very tricky to land precisely in a wind due to the sail wing. From the WSJ:

Google has scrapped its initial drone design because it was difficult to control and is now working on a new version, according to Astro Teller, head of the Internet company’s Google X research lab.

Teller told the South by Southwest conference in Austin, Tex., that Google founders Larry Page and Sergey Brin encourage such failures, so researchers can learn from the mistakes and try different technologies and strategies.

In August, Google unveiled a drone-delivery system called Project Wing that the Internet giant was testing. The prototype had a five-foot single wing that sat vertically on the ground and then turned horizontal after take-off. The design was supposed to combine the benefits of vertical, hovering take-offs and landings with the speed of wing-based flying. In the test, the drones carried supplies including vaccines, water and radios to farmers in Queensland, Australia.

The drone was mechanically simpler than other types of drones, but it was harder to control, Teller said on Tuesday. It didn’t hover well in high winds and its cargo shifted too much when the wing moved up and down, he explained.

Google began working on drones in 2011. It’s not clear when it began experimenting with the single-wing design, but Teller said half the team “knew it was the wrong answer” after eight months. After 18 months, about 80% of the team thought this, he added.

The team debated whether to scrap the design or test it quickly in public. Brin told the team they had five months to make deliveries to real people, which wasn’t enough time to come up with a different design, so the team went ahead with the Australia test with their existing prototype, Teller said.

“Even though Sergey’s five-month thing prolonged the problem, it created an end date for it,” Teller said. “It’s possible without that we would have extended the wrong thing even longer.”

Before the Australia tests, the team was already working on a new design that moves away from the single-wing-based approach, he noted

“They’re now working on that vehicle,” Teller said. He plans an update on the status of this new drone later this year.