From the latest issue of Make Magazine, a great profile of the Syria Airlift project, which is using inexpensive APM:Plane powered aircraft to train refugees to deliver food and medical aid in Syria and other war-torn places:

On March 16, barrels of chlorine gas rained down on the town of Sarmin in northern Syria, killing six and wounding many more — just one of many horrific chemical attacks in the civil war that has consumed the country.

“Sarmin isn’t far from the border but the border is closed to all traffic,” Sasha Ghosh-Siminoff, president of Syrian aid organization People Demand Change, texted his Stanford University-based friend Mark Jacobsen, four hours after the attack. “If your planes were ready, you could have flown in emergency medicine and gear.”

The planes Ghosh-Siminoff was referring to are drones, built expressly for this purpose. Jacobsen is the executive director of Uplift Aeronautics, a nonprofit which hopes to deliver essential medical supplies, food, and other cargo to Syrians via its Syria Airlift Project. Syria recently closed its border to foreign aid, and any planes that attempt to fly over the country run a high chance of being shot down. Uplift has a different plan: Fleets of drones that could swoop in by night, undetected by human eyes or radars. 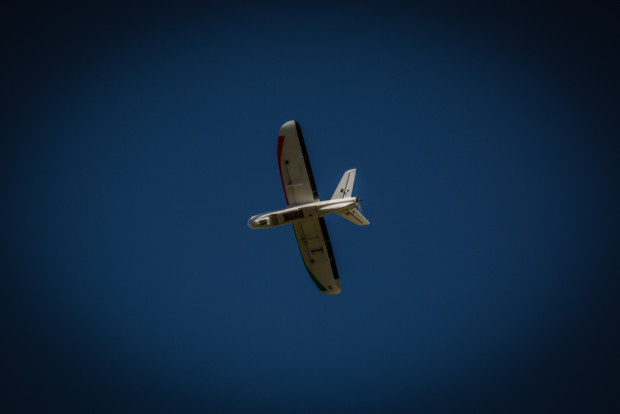 Jacobsen, who is pursuing a Ph.D. in political science, was in Istanbul about a year ago with a group of academics when a heated discussion broke out about international intervention in the Syrian war. Since 2011’s Arab Spring, when activists came together to protest president Bashar al-Assad and his government, at least 200,000 people have died there. More than 10,000 were children. A lack of medical care and food are among the government’s weapons against its own people.

Person after person at the gathering asked the same question: Why isn’t more being done? Jacobsen, a former Air Force cargo pilot, explained to one attendee that you simply can’t fly a cargo plane into such an unpredictable place. It’s impossible.

He went back to his hotel that night feeling guilty. It didn’t seem like a good enough answer. While speaking with his colleagues, he became fixated on the idea of sending in large numbers of packages — perhaps via drone. He took out a notebook at around 2 or 3 a.m., the hope of sleep long forgotten. 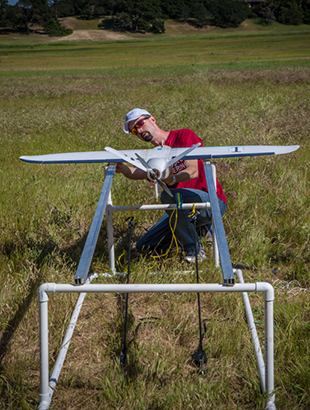 “It seemed like I was onto something with the idea of swarming small packets, but I didn’t really know what technology could do that, whether it would be quadcopters or planes or catapults or anything else. Balloons?” Jacobsen says. “I was just trying to lay out everything I could think of.”

Uplift Aeronautics and the Syria Airlift Project were eventually born, and today Jacobsen and a group of volunteers are busy flying prototype drones. Their plan is to fly hundreds over the border from a neighboring country on missions chosen by aid partners such as People Demand Change. Each can carry only a few pounds of supplies, but their small size makes them untrackable by radar and dispensable. If a chlorine bomb explodes, medicine-carrying drones can be there in an hour, as opposed to days — or never.

Uplift plans to train Syrian refugees and other people on the ground to fly and repair the drones. Its first destination would be Aleppo, Syria’s largest city. The war has hit it hard. Hunger and disease are common.

The drones would take about a half hour to fly to Aleppo. Instead of touching down, they would drop their cargo in a small box attached to a parachute. Then they would return. Back at the launch base, the location of which would likely shift from day to day, volunteers could switch out their battery, load new cargo, and launch again within minutes.

Flying anything, let alone hundreds of drones, into a country without permission is a breach of international law. Current sanctions bar sending U.S. goods into the country. In extreme times like these, exceptions can be granted, but they depend on various government channels.

Jacobsen isn’t exactly sure how Uplift will secure an OK from the U.S., though he has initiated conversations with officials. The drones will likely have to be approved by the U.S. Treasury and international agreements, and will need to comply with arms regulations and counter-terrorism laws.

The local approval process could also be messy. Uplift will need to schedule audiences with the governments in countries bordering Syria, such as Turkey or Jordan. They will need to prove that the drones will be safe and beneficial. The recent election in Turkey, and the country’s air strikes within Syria, add a new layer of complexity.

“In some ways, negotiating with the armed groups and the people inside Syria is easier than the Turkish governments,” Ghosh-Siminoff says. “It’s really difficult to navigate that bureaucracy and know you’re in the clear and not running afoul of some archaic rule.”

Inside Syria, it’s actually the groups fighting Assad that would be most likely to shoot down a drone. Currently, it’s the resistance that occupies the ground between Uplift’s launch site and Aleppo. But if Uplift can demonstrate the planes are for aid, and will not interfere with the opposition’s efforts, Ghosh-Siminoff said there should not be a problem convincing the locals to let them pass.

In a country strapped for resources, a scenario could arise where troops start capturing drones to use for their own purposes. Uplift thought of that. The drones are equipped with a self-destruct device designed to fry their navigation system if they fly too close to the ground anywhere but at the launch site. Any drone that gets too low will never be remotely pilotable again.

“We’re not planning to talk to them at all once they leave the takeoff area,” says Jacobsen. “Routes will be pre-programmed. Our custom firmware on the plane actually plugs its ears and stops listening to incoming messages while in Syrian airspace, which should make it considerably harder to hack.”

On a hot, cloudless day in April, Jacobsen and four volunteers gathered at Stanford University’s Lake Lagunita. Engineer Michael Taylor, a Ph.D. candidate in electrical engineering, led two other volunteers through setting up the drone launcher on the lake bed, which has become a grassy field thanks to California’s drought.

On a porch overlooking the lake, Jacobsen assembled and tested the “Waliid” drone. He ran new volunteer Stuart Ginn, a medical resident still clad in scrubs, through the plane’s software and pre-flight protocol.

Made of foam and held together by tape, the drone is not visually impressive. It’s shaped like a plane, as opposed to the quadcopters that have taken over the consumer market, which allows it to fly for an hour instead of minutes. Its wingspan measures 5′ 7″ and is decorated in black, green, and red — the colors of the Syrian flag.