Hex is a nanocopter that uses 3D printers to change its look. With the recent outbreak of 3D printers, this is one of the first applications of 3D printers in consumer goods for personalization.The look of Hex is completely customizable by the plug-and-play 3D printed shells provided by the team. There are many different designs available that can be directly mounted on top of the circuit board. Creative people are also able to design their own shells.

Hex has four to six propellers and can be controlled using mobile devices and is very easy to fly. The control methods have made the physical control stick remote control redundant. Hex has the capability of carrying a webcam that lets its users to take photos and videos from the air, and stream video in real-time on a tablet or a smartphone.

Being completely open source and Arduino compatible, makers and programmers will find Hex especially interesting as they can easily modify its behavior and make it do even cooler things! 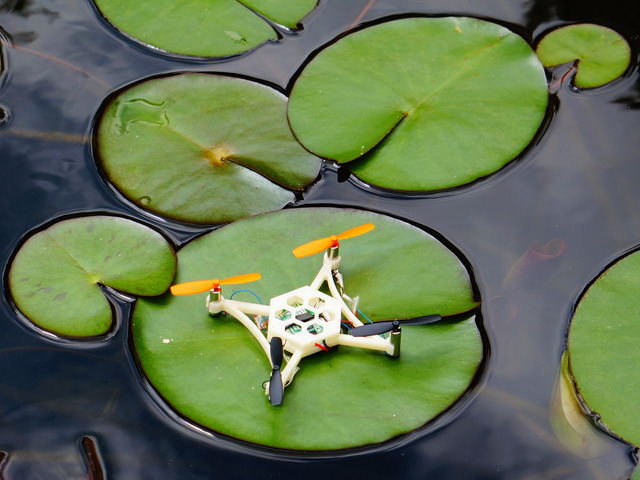 Hex uses Bluetooth 4.0 for communication between the smartphone and the circuit board. Hex can also carry a Wi-Fi webcam for real time video stream flow to the smartphone. In addition, Hex with a 5.8G Radio module and a pair of First Person View glasses can let users experience what it really is to be in the air. Hex will be officially launched on the popular crowdfunding site, Kickstarter, on August 26, 2013 and the developers are raising $10,000 for their innovative open-source nanocopter. Many rewards are on offer for pledges varying from $9 to $2999.

I have Walkera's Q100 camera and router device. You can get them for around $30. WiFi for real control is not realistic yet. The time lag is horrendous on the unit. I don't see how it could possibly fly a quad.

With that said, will your WiFi camera have little or no time lag?

Get the Walkera unit and see how bad it is. I have tried it on the iPad and iPhone and they are equally bad in the lag.

Is there and web or router based camera that is fast enough to do the job?

This looks really cool and I will back you in some way.  Congrats guys.  I have a walkera and this looks much cooler...

Hex Staff I would like to know how you guys have "no lag" on video. Compressed stream video need buffering you can push the settings to have a minimum near imperceptible but none lag.
Are you planning to use H264 codec?
Thank you.

Hey Alejandro, I probably should have said, it doesn't feel like there is any lag. Currently we are using MJPEG codec. H264 codec is still under development.

Video streaming will usually buffer to try and achieve smooth playback on varying connection speeds. But if you can control both the server and client, then there is no problem turning buffering off. With frame based processing and encoding and no buffering, you should then get latency in the 100-200ms range. Lower latency is also possible but require more specialized slice processing and encoding that usually haven't been implemented in SoC hardware.

Can't wait. Let us know when it goes live so I can back it!