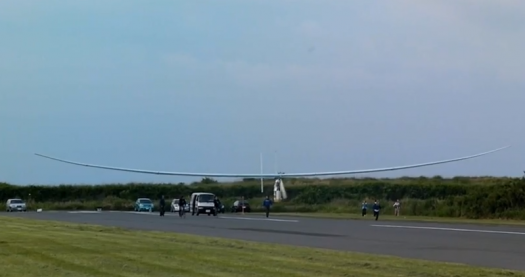 A team in Japan are hoping pedal-power will beat the world record for a human-propelled plane—in a flying machine made from polystyrene, they said Monday.

Team Aeroscepsy say a professional mountain biker will pilot their "Gokurakutombo", which has a wingspan half that of a Boeing 747 jumbo jet, in a voyage they hope will clock up 120 kilometres (75 miles). "We developed a new plane from scratch to break the world record," said Shinsuke Yano, who heads a collection of 10 engineers and enthusiasts. The Gokurakutombo—a phrase that means "Happy-Go-Lucky" and is also a pun on "happy dragonfly"—has wings that measure 35.6 metres (117 feet) tip to tip, but weighs just 37 kilogrammes (81 pounds) thanks to its polystyrene foam and carbon fibre construction. Yano said the world record for human-powered flight was set by a US university in 1988 with its pedal-driven Daedalus, a contraption named after the father of Icarus in Greek mythology. The Daedalus plopped into the Mediterranean just a few metres short of the Greek island of Santorini after flying 115 kilometres from Crete.

Team Aeroscepsy, who all work at Japanese motorcycle-maker Yamaha, hope to launch their flight from a field at the foot of Mount Fuji, and head for the Pacific Ocean next spring. Their contraption can take advantage of thermal air currents but does not need them to launch and fly. "Because it's a long flight over four hours and you need to keep pedalling with power that is required for climbing uphill constantly, you need a professional cyclist," Yano said. "We are pretty confident about reaching a new record. We know from past tests that our aircraft has that capacity. The most difficult part is reading weather conditions. Light wind can upset the fragile plane." (c) 2012 AFP